At the French Pavillion, the Franco-Algerian artist mixes original footage, re-enactments and behind-the scenes footage, to form a complex collage of her biography infused with research and history. 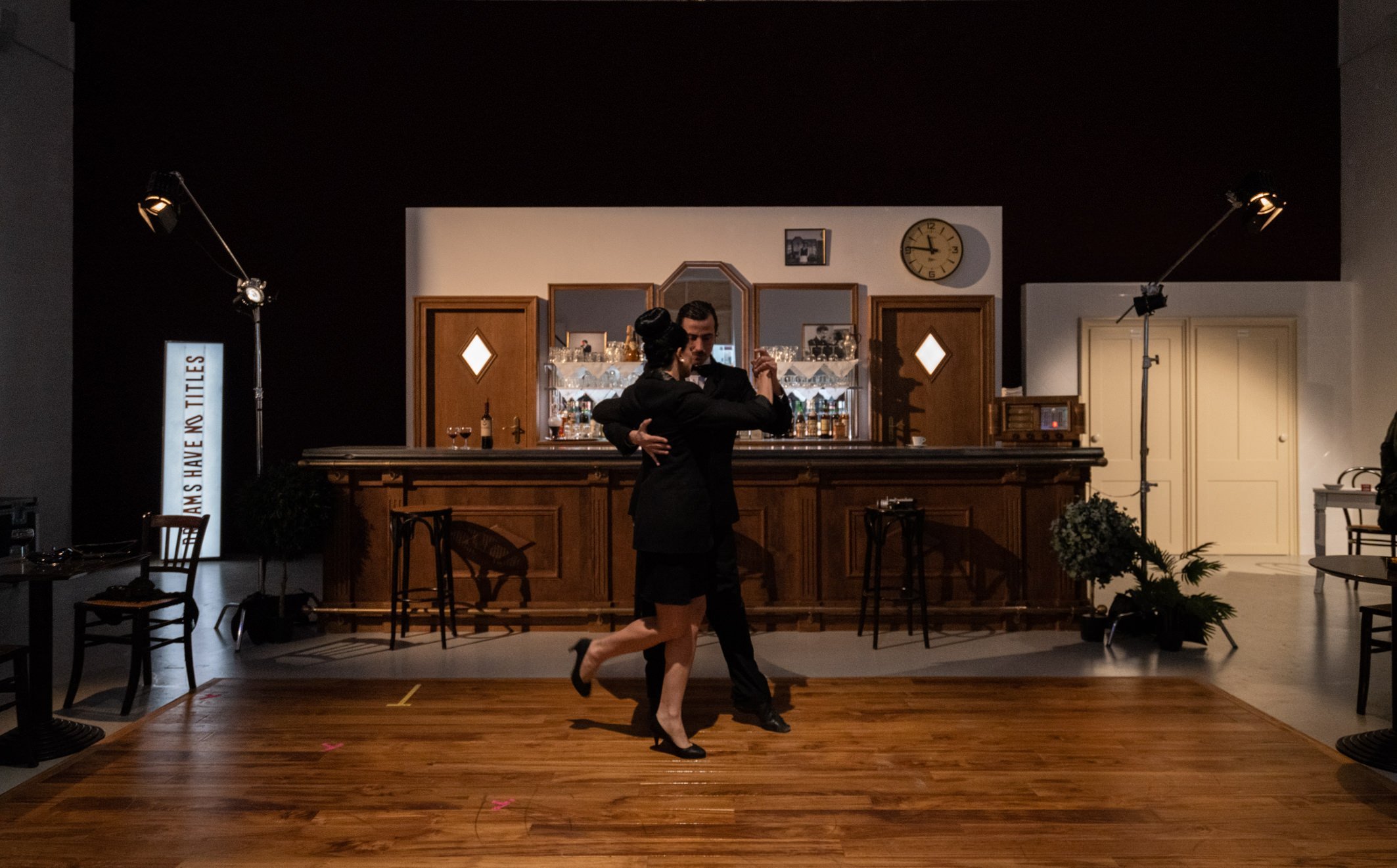 Zineb Sedira’s worlds unfold like time travel. At the French pavilion, she has built a movie set, where each crevice meaningfully adds to a thick plot, heavy with references to the artist’s life experience and her extensive research in film archives. Sedira’s love for cinema signalled here is unsurprising since documentary film is among her chosen artistic tools. She revisited childhood memories: Thursdays (when schools were closed) spent with her father at the local cinema in the Parisian suburb of Gennevillies, or her father taking her to pottery classes on Saturdays. She only later realised that these events were stepping stones for her future. Sedira keenly recalls the atmosphere of being surrounded by people watching movies in the late 60s, especially Egyptian ones—involving a lot of music and dance—or Italian Spaghetti Westerns.

The 1960s and the 1970s were a turning point: most African countries formally freed themselves from colonialism. Algeria, for instance, gained the independence from France in 1962, exactly 60 years ago this year. The cinema industries in France, Italy and Algeria flourished with remarkable avant-garde co-productions, framing history from a fresher point of view with a strong sense of political consciousness. At the same period, activist, liberation and civil-rights movements were spreading all over the world. Sedira is aware of the importance of cinema as a militant tool against imperial propaganda and as a defender of anti-colonial ideas.

Born in Paris to Algerian parents, Sedira moved to London in 1986 to study at Central Saint Martins and settling there eventually. Algeria, France and the UK enriched her life with a plurality of encounters that permeated her artistic practice early on in London’s art scene. Sedira and Sonia Boyce lived in the same road in Brixton at one point, and have been friends since. Boyce, who won this year’s Golden Lion with her project Feeling her way occupies the British Pavilion at the Biennale, right next to the French Pavillion.

Sedira often mentions that in her teenage years, she listened to funk and rhythm & blues played by Afro-American musicians. As with cinema, Sedira connected with this music because she could identify with the struggle and the demands for social justice that endure today. On her nomination to the French Pavilion in Venice, she was enticed by the prospect of including three different countries in one Pavilion. Yet, importantly, she also wanted to explore her love for cinema and her friendships.

For the artist, the time was right to make a movie about movies: the eponymous Dreams Have No Titles of the projects name. Her research started in Spring 2020 just as the world grinded to a halt. With the help of local consultants, Sedira did her research in the cinema archives of France, Algeria and Italy and for many months: “In general, I was inspired, both visually and conceptually, by film studios and sets, as well as the endless aisles of shelving filled to the brim with film reels of all shapes, materials, and periods. And I finally hit upon a real gem! Some texts made reference to a mysterious film, Les Mains Libres, sometimes called Tronc de figuier (Fig Tree Trunk), dating to 1964-65,” she recalls.

She had indeed stumbled upon the first documentary produced in post-independence Algeria by Casbah Film production, directed by Italian filmmaker Ennio Lorenzini. Sedira immediately understood the importance of the short-lived 53-minute documentary: after the premiere in Algeria and a non-competing presentation at Cannes Film Festival, there were only a few more screenings in Italy before it was forgotten in the AAMOD (Audiovisual Archive of the Labor and Democratic Movement) in Rome. Thanks to the Cineteca di Bologna, the film was restored, and Sedira inserted excerpts into Dreams have no titles.

The importance of La battaglia di Algeri is clear and it is underlined by the introduction to the script by Franco Solinas: ‘The film wants to talk about the irresistible push toward freedom of the underdeveloped countries, the internal struggle of colonialism and its consequences in the life of the metropolis. We are Italians, but we are first of all Europeans, and the French war against Algeria (with its consequences) concerns us too […]. Of course, the threat is everywhere, but the Algerian war and the corruption it has provoked in France seems exemplary to us’.

This is how the French Pavilion was transformed into a movie set. A large part of Dreams have no titles was actually shot in the Pavilion itself, with Sedira and the three curators, Yasmina Reggad, Sam Bardaouil and Till Fellrath appearing among the cast. The opening words “This film is about trickery” are the same opening lines of F for Fake. The trick is then announced: it is the mise en abyme; a film about films by an artist who is also filmmaker, actress and voice over artist. Sedira’s mixes original footage, re-enactments and behind-the-scenes footage, to form a collage of her personal life and research mixed with history. It is about belonging, integration and displacement, an investigation of the nature of truth, and a grand homage to cinema and the important people in Sedira’s life. Dreams have no titles is, ultimately, about friendship and daring to dream.

Zineb Sedira recalls: “I also relate the notion of remake to that of mise en abyme, which often crops up in my work. I myself am an artist-director making a film about films. My personal history is the starting point for a mise en abyme of the history of cinema by means different strategies designed to create a fiction-reality.” For Sedira, the mise en abyme serves to break the 4th wall, and the separation between the work of art and reality, it is a way to actually include the audience and delve into the relationship between art and life, reality and fiction, wakefulness and dreams.

In the main room Sedira recreated the ballroom of Le bal, in Ettore Scola’s movie. The visitor can sit at a table, unwittingly becoming an actor in a dancing scene. As soon as the actors start performing their dance, the space come to life. In an adjacent room, the visitor is projected into the artist’s living room in Brixton, borrowing from her solo show at Jeu de Paume, Paris in 2019. The room is filled with the artist’s furniture, books, posters, collages, clothes and vinyl. Again the visitor can be part of the scene by sitting on the couch and watching tv or by picking a book from the shelves and reading it. A conversation between Sonia Boyce and Gilane Tawadros that took place in the same flat one finds oneself in fills the TV screen. They are discussing the importance of London’s housing cooperatives and squats in Brixton – the vibrant and challenging neighborhood in London where they all lived in the 1970s – and how this facilitated artistic life and production.

In another small room, behind the living room, empty chairs and a coffin stand solemnly. Inspired by Luchino Visconti’s Lo straniero, Sedira shares a painful family history: the loss of her beloved sister at only 20. Accesible via the Ballroom, yet another room is filled with old film reels that recall a film archive: a desk with a lamp, the typewriter that the artist used in the movie, and a small scale reproduction of the living room in front of a green screen – again mise en abyme. Sedira plays with the set reproduction, the sizes of the objects and the light, which is more intimate this time.

In the last room, Dreams have no titles is projected in a recreated movie theatre. The audience can take a seat and enjoy the magic. In the joyous last scene of her film, we see Sedira dancing with the crowds (green-screen) and then alone in a yellow 1960s dress and a yellow background. At this point, she has successfully jumbled dreams and reality through the powerful tool of art.