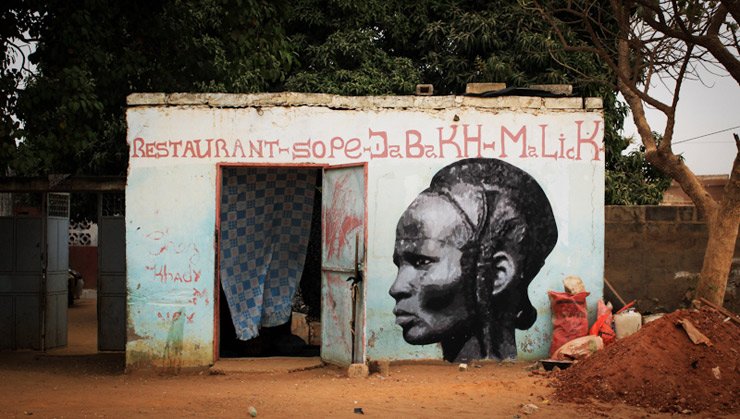 In what’s now know as The Republic of Benin, there once lived an all female regiment of warriors, the Amazons of Dahomey, women protected by the King Himalaya f. Chosen and enlisted for their physical robustness and strength, they were socially equal to men. Fearless warriors, they decapitated their French enemies during the first years of the French-Dahoméenne war. French artist YZ Yseult (YZ is pronounced eyes) paid homage to these women through a project S he realised while in Senegal in January: the faces of the warriors, printed on ultra-thin soy paper, were symbolically posted on houses, kitchens and places where present day women spend the majority of their time, integrating with those domestic scenes and their supports. We had a chat with YZ to learn more.

Rewriting stories on walls, giving back its memory to the people, being of inspiration for African women: Amazone is a project of public art but also a social campaign whose objective is all of this. What was the reaction of the women from Senegal?
“A population with a short memory is a population with no future” – David Gakunzi.

Whether it is Africa or not, we have the duty to know our own past, to know who we are, to build ourselves, knowing our defeats just as out victories. Africa is enjoying a very rapid development and it is fundamental that it can be an inspiration to people and men who have represented the strength of this continent.

About Amazone, the interest shown by people who came by was evident. Both men and women were curious to learn about the stories of the women depicted on the walls and to know their names. Being that, this series of portraits on paper though, it is ephemeral. What will remain will only be a photo of the work in its natural context and will then be shared and diffused. I believe this to be the media that allows for the largest number of people and that was the exact moment where I felt a real interest for the Amazons and I understood the importance tha their story was going to have for both men and women, despite their sensibility to African culture, if any.

This project shows a strong Africa, proud, valiant, and especially brave. Very different with respect to the images usually shown by Western media.

The intimate relationship you have with spaces is built through street art, in particular stencils, the technique you use the most. What relationship do you have with Africa and consequently with the surfaces you choose to act upon?

The first time I came to Africa, precisely in Senegal, was to live here for one year. That trip was connected to a quest for my identity I had dreamed of for a long time. Not only am I an Anglo-French, my grandfather was from Guadalupe. Successively, I have travelled through various African countries.

The ancestral culture of this land inspired me a lot and helped build my own personality. The role covered by women in society was a great source of inspiration as well. I believe these to be the strength and the future of this land. That’s why the choice of the surfaces for the Amazone project was so intuitive. Many kitchens are run by women. They sell bread but also have serve the purpose of bBoeing restaurants, houses, etc. That’s why I thought those walls were the most appropriate for the project. It is another way to give value to the story of women who have left a mark in history and in the life of Senegalese of today. The support on which I work has to be in absolute synchrony with the subject I will treat. In a sense, this is why I use soy paper, it shows the matter of which it is made and therefore, its history. Amazone almost seems like the natural continuum of your old project about women from Guadalupe, “Back to the Roots”. Are you working on any other projects dedicated to women?
There is a continuity in the projects I made. They are choices defined by my personal history, hence what I write. In fact, Back to the Roots is part of a series of projects valorizing our culture. “Amazone” is about African women but could be adapted to any other country. In general, women inspire me a lot. Whether they are from another country, era or from these days. Their fight, their bravery, their experiences follow me through my own life choices, in my beliefs and I hope that one day these kind of projects will communicate these values. Was it complicated to fulfill your works, did you have to hide?
It has been a while since I last hid to put my installations on the street. When you meet people you can talk to them about the projects and engage them. That’s how I have met many women. That’s why, in some neighborhoods, the reactions might have sparked some complains but, generally, residents have been very open towards the project from the very moment I explained them what it was about and what its objectives and intentions were.