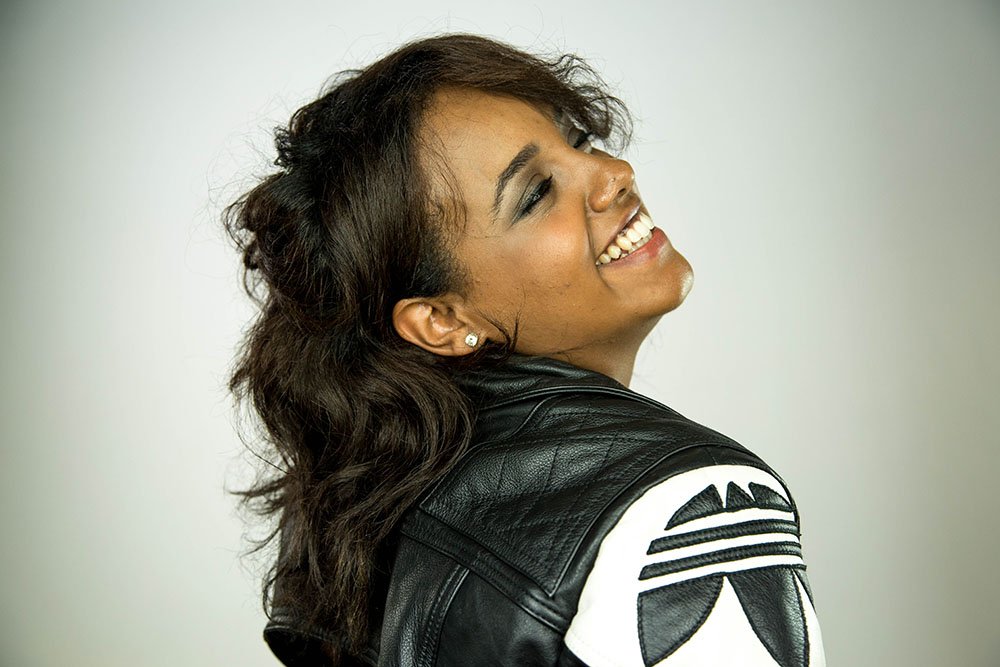 Behind the successful tv and radio host Winty’s big smile, kindness and liveliness, hides a girl that rose through the ranks and fought to get where she is today. Wintana Rezene, 28 years-old, Milanese born and bred. She likes to define herself as an athlete because it contradicts what people think about African marathoners.

Watching her hosting numerous shows, you are immediately struck by her contagious smile, positive attitude and vitality, which makes her one of the most interesting hosts in Italian television.

Her battle to the top started with Radio Popolare Milano, to MTV where she developed her skills hosting TRL on the Road, TRL Awards and the MTV Days, to Occupy Deejay, where actors, singers, bloggers, celebrities from show business to sports speak about their work in interviews and video clips.

In 2013 and 2014, she hosted X Factor 7 backstage, while this last year she worked with brands – Samsung, Testanera, Reebok, Control – and was involved in special projects. You’ve hosted many programs connected to music. If you could choose, what would you like to host and in what type of media outlet?
True web presenters don’t exist yet. I’d like to be a pioneer on this frontier and develop storytelling projects for companies trying to recount people’s personal stories. Businesses are becoming the new content editors and new channels for expression.

On May 28th you presented Unlock the Future, the Italian TEDxWomen that promotes themes of diversity, inclusion and digital evolution in society. Twelve prominent and successful women talked about their life stories. What would you have spoken about if you had been among these 12 women?
Maybe I wouldn’t have spoken myself, but I would have asked my mom to speak…a woman who was able to raise two daughters by herself, in a foreign country, looking confidently towards the future.

Who are your professional heroes?
They’re people who share certain values – values which are fundamental for me: respect, willpower and the desire to sacrifice for something that they believe in. All the things we hear about or the things that happen in life that can become reference points.

Recently Misty Copeland’s story has made me reflect a lot. Physically it was unlikely that she’d become a principal dancer for the American Ballet, but she accepted her physique and succeeded.

She’s become an icon and is stopped by fans like a pop star. She doesn’t have any advantages simply because it’s the Obama era, instead it was her determination and tenacity that allowed her to achieve her goal, despite her past. Ok, and I have to admit that I sleep in a t-shirt with Oprah Winfrey’s face on it.

You are a creative, who creates and produces editorial contents based on storytelling. How many web-based future projects are on your horizon?
The web has always been a huge influence in my work and nowadays it’s unthinkable not to take it into account… I am curious and hungry for fresh ideas and the web is the most democratic tool in the world that allows me to always stay updated. I’m fascinated by the potential of applications like Twitter’s Periscope and I believe that these types of instruments will redefine communication.

Being a travel lover I have read that if you were asked to participate in a reality tv show you’d like to do Pechino Express. Do you want to tell Costantino della Gherardesca why he should pick you?
I think that he should choose me exactly because I have no idea what I’d be capable of doing in such an extreme situation…I’m having a laughing attack just thinking about it.

Do you have a country you dream about visiting or would like to learn more about?
China. I just finished reading Cixi’s biography, the last empress of China, and I was so fascinated by this vast country with it’s tradition-filled, thousand-year old history. Wintana Rezene was one of the panelist of Afro Italians in The Arts Today, an informal round table developed by GRIOT for the American Academy in Rome.

The conversation considered the accomplishments of four Italian creatives – Wintana Rezene, Stella Jean, Fred Kuwornu, and Antonio Dikele Distefano – in various fields, assessing at the same time their status in an Italy transformed by immigration.