We Are Angry, We Are Sad, We Are Tired, We Are United | Lumbung Community Respond To Documenta 15’s Scientific Advisory Panel

The open letter was published following a press release by documenta 15 which instructed a newly appointed advisory panel to "provide scientific support in order to analyse works identified or discussed as anti-Semitic." 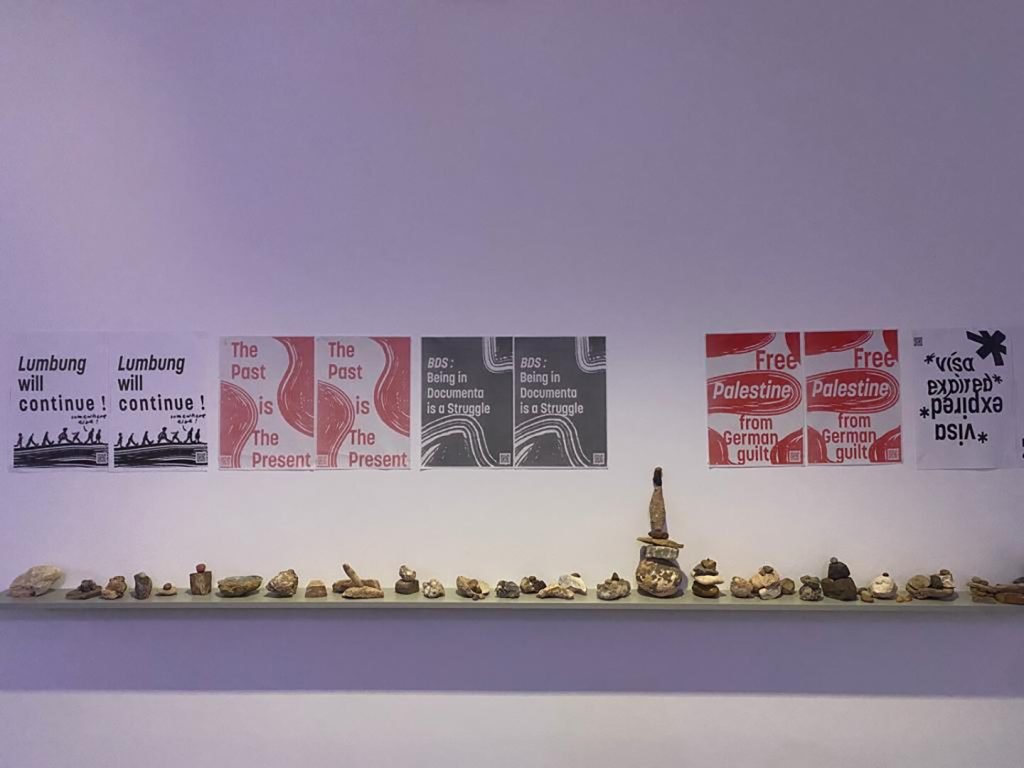 We are angry, we are sad, we are tired, we are united.

Today’s press release published here refers to a broader preliminary assessment. We have seen this preliminary report of the scientific advisory panel.

This report represents a new line crossed, and we categorically refuse it: This line marks a racist drift in a pernicious  structure of censorship. We denounce the vicious attempt at censoring the presentation of the Tokyo Reels. The scientific advisory panel, appointed by the Supervisory Board of Documenta gGmbH in August 2022, has developed their preliminary findings.1 In addition to myriad and problematic accusations, the report argues that “[…] the serious problems of documenta fifteen consist not only in the presentation of isolated works with anti-Semitic imagery and statements, but also in a curatorial and organisational structural environment that has allowed an anti-Zionist, anti-Semitic and anti-Israeli mood to prevail.”2

Because we stand by our rejection of censorship, we vigorously opposed the creation of this scientific advisory panel. We do not accept the allegations of their preliminary report, which unashamedly reproduce poorly researched claims from the media; likewise, the report lacks scientific proof, academic references, rigorous argumentation and integrity.

For months we have continuously faced smearing attacks, humiliations, vandalism, and threats in major media outlets, as well as in the streets and in our spaces. What is even scarier is the normalized dismissal of these actions. We have detailed these experiences in our previous statements and this has been completely ignored by the Supervisory Board of Documenta gGmbH.3

In this hostile environment, actors with a coordinated agenda have been determined to find any indication of pre-assumed “guilt,” twisting any critical detail into a simplistic anti-Semitic reading and repeating the same accusation again and again until it became accepted as fact. It is obvious to us that the same mechanism of passing the ball from cyberbullies and racist bloggers to mainstream media outlets to racist attackers on the ground to politicians and even to academics is being reproduced in each situation. It has clearly informed the mechanics of the “scientific” advisory panel.

We know what it means to be discriminated against due to color, ethnicity, religion, gender, sexuality, origin, caste, and/or disability. We understand the ways that our different anti-colonial struggles intersect. And that these struggles are faced in everyday life in society at large. We are committed to art’s role in resisting these broader societal injustices. And in the context of documenta fifteen and the specificities of the German context we see that the targeting of Palestinian artists is the point at which our anti-colonial struggles meet, and have become a focal point for attack. Anti-Muslim, anti-Palestinian racism, anti-queer, transphobia, anti-Roma, abelism, casteism, anti-black, xenophobia and other forms of racisms are racisms that the German society must deal with in addition to anti-Semitism.

We are outraged, we are exhausted, but our struggle will continue.

We deduce from the loose assumptions and baseless accusations of the preliminary report, that the International Holocaust Rememberance Alliance definition is being used.4 By using this deeply problematic definition of anti-Semitism, which allows for the conflation of criticism of the State of Israel and criticism of Zionism with anti-Semitism, the scientific advisory panel creates a framework that sets up an inevitable condemnation of the lumbung, its structure, Palestinian artists and theirs works, and ultimately documenta fifteen as a whole. What kind of academic integrity purposely ignores history and facts in service of racist and hegemonic agendas?

The preliminary report equates critique of the current violent actions of the Israeli State with hatred. Consider the following inflammatory statement:  “The anti-Israeli propaganda and its staged affirmation by the artists are likely to incite hatred against Israel and Jews.”5 It indicates that the writers of this report reduce artistic practice to propaganda—an exceedingly complex term the scientific panel fails to define. Their simplistic notion of “propaganda” enables a specious argument that critique of the State of Israel is an incitement of hatred of an entire people—this is a very serious accusation that shocks and hurts us.

We reject it categorically. We refuse the intentional political maneuver that aims at separating struggles and dividing them from each other—dividing us from each other. We stand together, unconditionally and without hesitation, with our Jewish comrades and communities that have been the most outspoken. They know, like we know, that we are all in this together. We know that no struggle can succeed alone, that when the hostility has been high—and the aggression too hard to bear—it is Jewish voices in Germany that have entered to embody and amplify the Palestinian voice. They know, like we know, that safety is something that we build together, that safety is something that cannot be granted by the state. The state is concerned with security, but security is not safety: safety can only be created in community with others.

The question is not the right of Israel to exist; the question is how it exists. Resistance to the State of Israel is resistance to settler colonialism, which uses apartheid, ethnic cleansing, and occupation, as forms of oppression. The report states that, “A comparatively large number of works deal with the Arab-Israeli conflict. Almost all of these works express a one-sided critical or even decidedly anti-Israeli attitude.”6 documenta fifteen is an exhibition which contains work by many artists who belong to wider grassroot movements that have struggled and are still struggling with colonial regimes. The Palestinian anti-colonial struggle emerges in many lumbung artists’ works because of the historical solidarities between these transnational anti-colonial struggles. The report tries to discredit this transnational solidarity by calling it a one-sided view of a (binary) conflict—reducing a historical and global complexity to caricature.

Despite its name’s evocation of “science,” the panel uses no clear methodology or set of definitions to make its assessment. Side-stepping the rigorous task of defining its terms, the panel repeatedly strings together “anti-Zionist, anti-Semitic and anti-Israeli”—effectively wiping out their vast differences in a metonymic blur. The scientific advisory panel’s conclusions about documenta fifteen’s supposed racism are predicated on this reckless conflation of terms. We refuse the simplistic, oppressive, pseudo-scientific approach of the Supervisory Board and the preliminary report’s lack of rigour. We understand this as a way of projecting onto and transposing German guilt and history into the Palestinian and other anti-colonial struggles. We recognise that in place of a meticulous methodology, the arguments use a lazy and vicious manipulation pitting those who critique oppression against each other, imposing false rifts between communities along the lines of identity. This is an obscuring tactic, instrumentalising one community against another. We refuse and condemn the selective use and weaponization of “science,” history and the other’s suffering.

We are determined, we are together, we are not giving up.

We do not give permission to be defined, inspected, re-colonised by yet another institution. We refuse—and we act upon our refusal—in the same manners of the lumbung: we do it together, affirmatively and poetically. We assert that lumbung continues after documenta fifteen ends; our solidarity continues while your superiority, arrogance and power games end. From now on, everywhere and for many years ahead, we will be practicing our withdrawal from documenta, and building on the lumbung.

We refuse the Supervisory Board and shareholders’ aggressive, unvetted and intentionally humiliating form of criticism and judgment. We refuse Eurocentric—and in this case specifically Germancentric—superiority, as a form of disciplining, managing and taming. We come here as equals. We come here in power, and we come here to put ourselves in the public domain, with nothing to hide or be ashamed of. We come here as nothing less than equals, who can humbly learn from each other, who can help each other, who care about each other, because we know that our interdependency is the only path toward a more just planetary future.

We have been working with many grassroots groups in Kassel. We have shared our struggles and fears. We have taken criticism where criticism was expressed, and we have delivered criticism where criticism was required; this made us all stronger and more resilient. This is how art creates meaning, how it moves, how it should and does work. Opening our vulnerabilities and struggles to the audiences and publics in Germany has been an act of trust in audiences that are engaged like us, vulnerable like us, struggling within their locality like us, asking for solidarity like us, and willing to be in solidarity, just like us. We have witnessed audiences engage and critique, spending time with the work and ideas presented at documenta fifteen. We have been asked difficult questions and enjoyed so many inspiring conversations.

The openness and the inclusivity of the lumbung is how we imagine our world to be. It is not a mere practice for documenta fifteen; it is a model we have been practicing before we gathered here and which we will continue to practice as a way to be in solidarity, a way to be inclusive, a way for thinking, sharing, documenting, a way to fight, a way for resilience.

The original version of this letter was pulbished on We Refuse on September 10. The English version of the press statement released by the Committe can be found here.

1. It was announced on August 1: https://www.documenta.de/en/press#press/3039-shareholders-of-documenta-introduce-scientific-advisory-panel

4. For a critique of this contentious definition see this open letter published in The Guardian: https://www.theguardian.com/news/2020/nov/29/palestinian-rights-and-the-ihra-definition-of-antisemitism