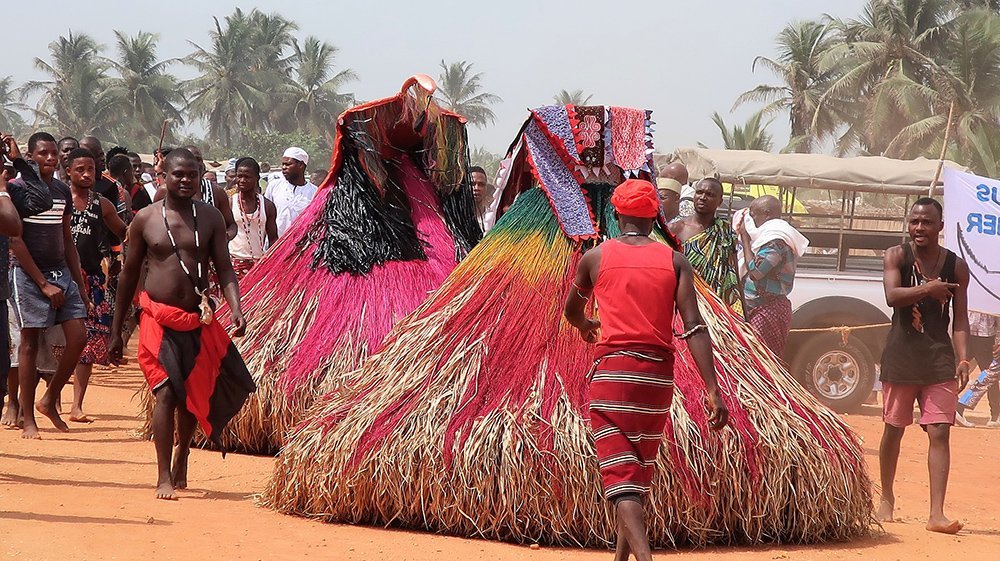 Every year, on January the 10th, in the Republic of Benin the Vodoun Festival is celebrated – the national day of Voodoo – religion practiced by 17% of Benineses and officially recognized in 1996 (even though, walking in the streets I have seen some graffities indicating 1992 and both a guide and a researcher had confirmed that it was the official year.)

Thousands of devotees flooding from the whole country, the continent and other countries of the world – mostly Americas and Caribbeans – gather in the small town of Ouidah to be blessed by the voodoo leader (the roi), who nowadays is Daagbo Hounon Mètogbokandji II, the eleventh roi on the throne. During the ceremonies, with music, animal sacrifices and rituals to honor divinities and ancestors, the many tourists around share glasses of gin with the locals and you can often spot them moving franticly from one side to the other to take pictures, an activity that is allowed behind a variable economic offer. Of course, there is always a price to pay to free your spirit. For some it is not just a tourist attraction to tell everyone about once back to the routine or something to just tweet or post about but rather “a sort of Camino de Santiago, a route to find your own soul and to give equilibrium to the spirit”, an Italian that has been participating in the festival for thirty years confessed to me. But what is Voodoo? We usually conceive it as something concerning sorcery, black magic with the typical ragdoll to pierce with the needles to which attach hairs from the interested person so that the ritual has its effects. Nothing like that, at all. It is a proper religion, within which rituals and Catholic symbols live together – and if you ever want to live this experience, one of the things that will amaze you will be the Piton’s Temple, a Voodoo temple right in front of the Ouidah church. I wanted to listen to what Benineses wanted to tell me about, considering voodoo “a confession that encourages dialogue between people, between life and death, between religions”. It is not strange then for the local population Voodoo is much more than a simple festival. It is a lifestyle that permeates daily actions and events.

From an aesthetic and commercial point of view, the festival is a mix of colors, a conversation between past and present. On one side there are the traditional garments, on the otherside made in China accessories, covering heads, hands, arms, neck and ankles – and British gin to use during the sacrifice rituals. From an artistic point of view you can really perceive the strong sense of going back to old forms of , with the rituals made with the purpose of involving the audiences and conceived to fully engage the hosting spaces. A festival, a religion, that has now crossed national borders and the presences of so many nationalities further confirming the feeling of being in a global village where performances are key and are points of convergence between many cultures and identities.

As Hounon Rodrigue, son of the king, explained to me: “if Voodoo had its Vatican, it would surely be here at Ouidah, in the Houwné royal palace, and my father would be the Pope. Featured image | via  – All other images | (c) Janine Gaelle