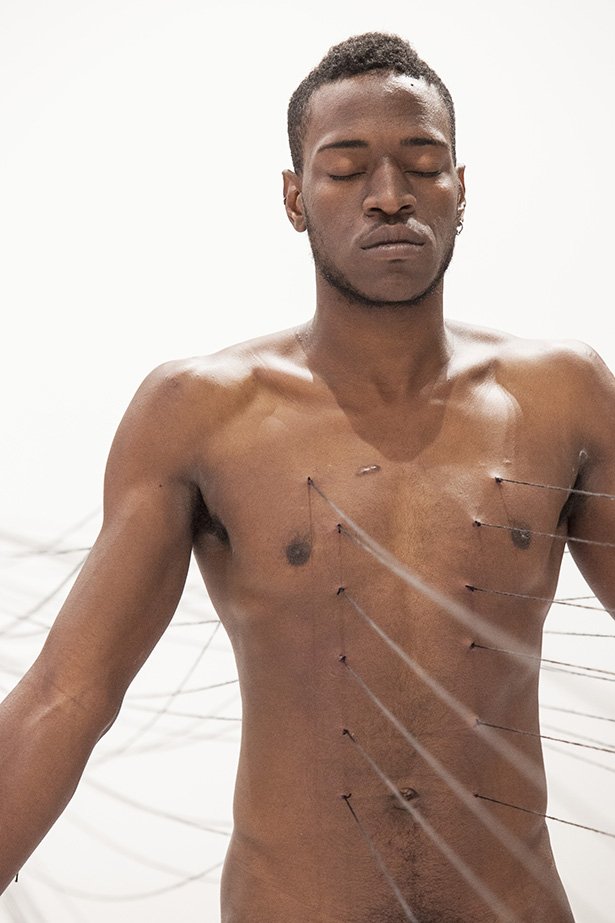 A performance artist turns into art itself, as he uses objects, his body and the time and space surrounding us.  He merges with the artwork leaving no glimmer of distinction between himself and the artistic action.

Even though it exists in an ephemeral dimension, the performance leaves traces in the surrounding space and the most violent acts scar the body as well – unlike paintings that instead stop existing once completed, unless photography or film intervene.

The young Cuban artist Carlos Martiel bears the scars of these violent actions, as the submission of the body is at the centre of his performances.

Laid in a fetal position and covered with insecticide; anesthetized in a boat while it adrifts in a river; covered with mud and beaten by a group of people; stood, at the center of a hall, with wool threads stitched to his body and then pinned to a wall.

Raw and provocative performances that add strength to the socio-political discourse addressing racism and repression, discrimination and abuse of power, police brutality and political negligence to the migration crisis.

These are the contradictions of our humanity that pierce Martiel’s body, his skin is the site of an ongoing struggle among these lacerating injustices.

In Trophy, a performance presented last year at the Contemporary Art Pavilion in Milan, Carlos Martiel denounced the inhuman treatment suffered by pre-Colombian and Latin populations at the hands of colonialism and neo-colonialism.

The naked artist laid still in fetal position, stabbed with an arrow crossing his right side. An arrow stuck in the flesh… An image that evokes the painting depicting Saint Sebastian, but also recalls Ali. But unlike the martyr and the boxer, Carlos Martiel was not standing and, though he was stabbed, he was not the object of the persecution. In his performances, the artist offers his body in a ritualistic way, bearing injustices that afflict minorities. Martiel’s body – black, yet universal – tells us about the failures of humanity.

The artist’s first Italian solo show at galleria Rossmut in Rome ended on April 17th. But his works will be exhibited in Italy once again at the 57th Venice Biennale. For the occasion, Martiel is presenting a new performance entitled “Mediterraneo”, at the Cuban Pavilion on May 12th.