Unbolting Statues | The Battle Of Memories 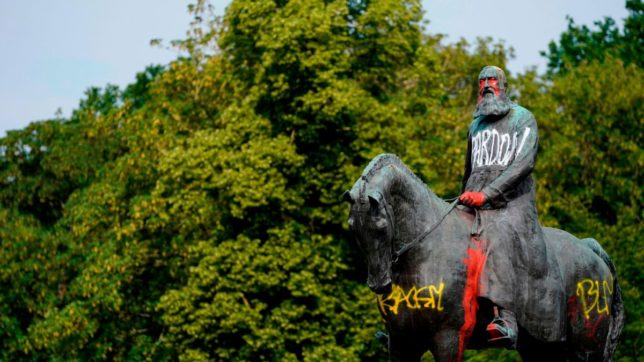 The statues of Leopold II in Belgium are being removed (June 2020). In 1885, Leopold II embarked on a private project, separate from his rule in Belgium, through which he colonized the Free State of Congo in Africa. 10 millions of Congolese were tortured and murdered - via

2020, what a strange year! It started with the Covid 19 pandemic and even though we were not over with this issue yet, the whole world had to witness and contemplate the tragic death of George Floyd, a Black American father murdered by a police officer during a police check.  Following this event, a wave of protests broke all over the US, before spreading to Europe. British, French, Germans, Irish, Italians, Spaniards and many other European nationalities belonging to minorities—but not only—started to denounce the hypocrisy of their birth countries with regards to discriminations. Originally peaceful, these anti-racist demonstrations took a more violent turn in the past few days.

Churchill, Colston and Rhodes in the UK,  King Leopold II in Belgium, Schoelcher, De Gaulle and Colbert in France, and Colombo and Jackson in the US are among the statues which have been either damaged, unbolted, or destroyed by protesters recently. Misunderstood by many, most governments have utterly condemned these acts, arguing that we should not forget or deny our past. To shut down the debate as soon as possible, British Prime Minister Boris Johnson asserted that the removal of statues was lying “about our history,” while President Macron  declared that “the Republique will not erase any trace or any name from its history… it will not take down any statues.” However, instead of closing the conversation, these politicians triggered a battle of memories.

The question is: should we work to preserve our historical heritage, or is it now time to get rid of the controversial elements of our public spaces? Especially when these monuments are as morally questionable as the statue of the Italian journalist Montanelli. Recalling his so-called romantic relationship with Destà, a 12 year old Eritrean girl, on a talk show in 1969, he argued—with a smile on his face—that “in Africa it was another thing,” which obviously is not an acceptable argument nowadays. The major of Milano, Beppe Sala was criticised for stating “I’m against the removal of the statue, we all make mistakes.”

But it is important to mention that a statue is first and foremost a work of art. Yet, it has the specificity to be politically or morally non-neutral, for it has been made to celebrate the memory of an individual, a victory or a great accomplishment. Erected in the middle of the public space, the sculpture of a major historical figure is always submitted to a value judgement, mirroring a society and its culture. But what happens when these monuments no longer reflect our contemporary values?

According to historian Frédéric Régent, a specialist of the history of slavery in the Caribbean, the debate over the removal of controversial statues requires contextualisation and explanation. It must be treated as a domestic political issue to avoid biased Americanised analysis, since the relationship with slavery and colonisation vary from a country to another. Régent also adds that “we can’t reproach the dead principles, which did not even exist at the time of their existence.”

History is neither good nor bad, it is about context. Monuments raised to pay tribute to a Colbert, or a Francis Drake can legitimately irritate descendants of enslaved people. But it would be anachronistic to reduce these historical figures to colonisation and slavery. Nevertheless, when a feature of the public space becomes a socio-cultural issue, the best way to decide its future within society is through democracy.

Some commentators have—rightly or wrongly—asserted that these degradations were the doing of a few uneducated extremists, exploiting peaceful protests to bring chaos to the streets. But damaging monuments is not just a simple and isolated act of rebellion and anarchy. On the contrary, it is a desperate but pragmatic cry from people who feel despised and rejected by the public spaces of their own nations.

Thomas Snegaroff explained that throughout history, the unbolting of statues has been a recurring phenomenon. After a war, a major political or cultural change, new regimes or institutions have knocked monuments down to signify the end of an order and the beginning of a new one. Moreover, removing problematic monuments is not necessarily “editing” or “censoring our past”, to quote Boris Johnson. It is a way to build a national public space where all citizens recognise themselves as participants to the history of their country.

What’s interesting in the debate about the removal of polemical statues and events such as the Black Lives Matter protests, is the reaction of African countries. If we take the example of Congo (DRC), the damaging of King Leopold II of Belgium’s statue in the name of its past misdeeds was misunderstood. Local media has shown little interest in what has been happening in Europe and struggles to understand why Black Europeans are so focused on the deads of the past when Congolese people keep dying of hunger and war in huge numbers every day. They also reproached the fact that Western media don’t talk about the daily tragedies which strike their countries with more depth. This reaction can sound surprising, but it is important to comprehend that African or Asian peoples’ account of history and civilisations is quite different from the Western World’s.

Civilisations are not static, they die, evolve or step aside in order for others to flourish. The role of history and memory toward these changes is to build a coherent narrative embracing the complexities and the diversity of a world in constant movement. Talking about unbolting statues should not be taken as an affront by conservative politics, but like a step forward in the writing of history. However, the removal of controversial monuments is not the only thing which should be done. It is indeed time for those who govern us to endorse measures to recognise the place of s-heroes, who have been neglected for far too long. I am sure our cities are desperately languishing to see sculptures representing non-white actors of European histories.

It is time to see in our streets, in the Parliament, the Senate or any place of symbolical significance the rise of monuments dedicated to Aimée Césaire, Josephine Baker, John Brown, Mary Seacole, princess Kaʻiulani, Ignatius Fortuna, Léopold Sédar Senghor, Olaudah Equiano, Sake Dean Mahomed and Toussaint Louverture.