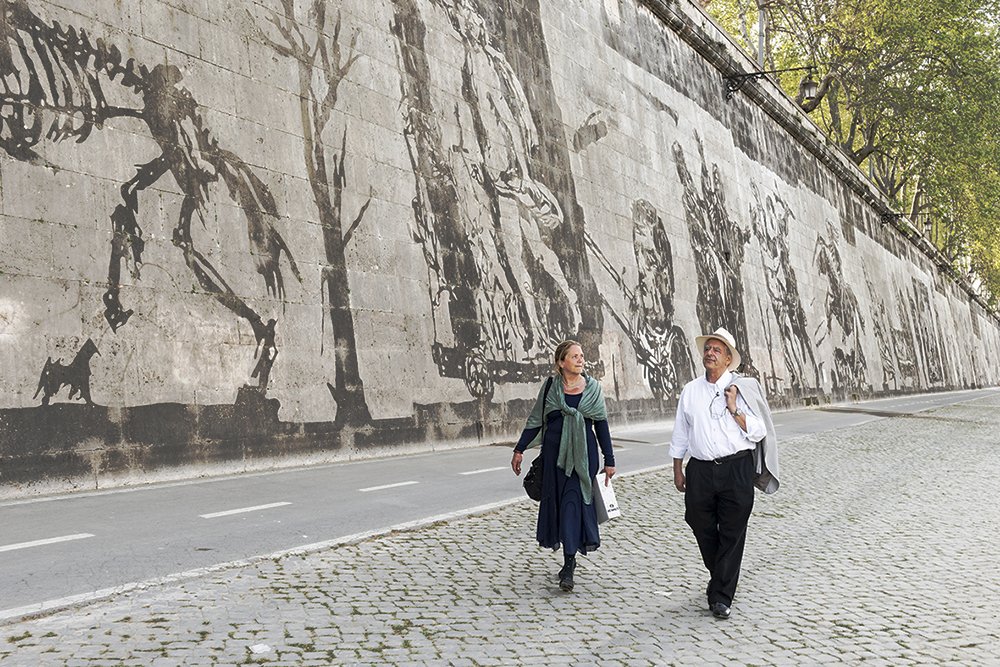 Finally the Triumph has arrived. In the past weeks the 500 meter-long frieze newest work by internationally acclaimed South African artist William Kentridge has come to life in all its majesty on the travertine embankment walls that line Rome’s urban waterfront: Triumphs and Laments.

A site-specific installation, a temporary artwork which through more than eighty figures, up to 10 meters high, recounts Rome’s greatest victories and defeats from mythological time to present, forming a silhouetted procession on Piazza Tevere that in five years will no longer exist.

You might be wondering, yellin’ “Say it again! Why? Who is going to remove this magnificent work?”. Nobody. The technique used to realize this installation consisted in applying large-scale, temporary stencils to the site’s travertine walls and using high-pressure hot water to wash away the pollution and biological growth, forming a reverse image.

A technique first employed by Kristin Jones, who designed and created the iconic parade of Roman She-Wolves on the same stretch of riverfront in 2005. Like the She-Wolves, the more than eighty figures that make up Kentridge’s Triumphs and Laments emerged from the stone’s natural patina and will eventually return to the stone from which it came. Thus, it will be a living work that will change and vanish naturally over time. Ashes to ashes, dust to dust. I can recall as if it were yesterday when two years ago an en plain-air workshop of what Triumphs and Laments would had been was presented at MAXXI museum. A workshop made up of instrumental music, songs and chants, plays, developed by TEVERETERNO, the American non-profit organization founded and run by a truly visionary artist who I love to refer to as Kristin “Perseverance” Jones.

I also remeber how volunteer musicians, vocalists and performers during the rehearsal executed on the banks of the river [Tevere],  dilegently and keenly followed the instructions of ‘Maestro’ Kentridge and South-African composer ‘Maestro’ Philip Miller, who has collaborated with the artist for years. I can still feel the same excitement today that I felt while being there.

Well. Today and tomorrow April 22nd you can enjoy for yourself all of these efforts in their plenitude and best creative, artistic expression.

What is going to happen? Triumphs and Laments will premiere with a live theatrical program created by William Kentridge, with original music by renowned South African composers Philip Miller and Thuthuka Sibisi. And I guarantee that when Kentridge makes theatre, something comes out that goes beyond words. I promise you’ll get goosebumps. At least, this is what happened to me when I saw his pièce in Florence last year “Ubu and The Truth Commission.”

The performance features live shadow play and two musical processions – one an expression of triumph, one of lament – converging against the backdrop of the frieze, projecting voices and instruments across the river where you’ll have to gather.

The processions will spotlight more than forty musicians and vocalists, as well as a diverse range of instruments, from the soft tones of the African kora to the rousing drone of the Italian zampogna. Voices from both the past and present will rise and fall in the call and response of Triumphs and Laments: a Mandinkan slave song from West Africa, an ancient Southern Italian melismatic folk song, a battle song from the Zulu warriors – with poet Rainer Maria Rilke’s words to be recited and sung throughout: “That is the longing: to dwell amidst the waves / and have no homeland in time.” [Questa e la nostalgia: vivere nella piena / e non avere patria dentro al tempo. Music. Magical Music. A music of exodus, of tragedy, of hope.

If you want to celebrate Rome’s Birthday (the Ethernal City is turning  2769 years) through the biggest project of public art the city has ever seen, through William Kentridge’s largest public work to date, carefully follow instructions below.

William Kentride has invited us. Not accepting this invite would be a dishounour towards Rome’s history [and William].

You can watch and listen from the left bank [east] of the river, opposite the frieze, which can be accessed via staircases at Ponte Sisto and Ponte Mazzini, and from the street (Lungotevere dei Tebaldi) and bridges above.

TEVERETERNO is a multidisciplinary non-profit organization dedicated to the establishment and ongoing stewardship of Piazza Tevere: the first and largest public space for contemporary art on Rome’s urban waterfront.

It was founded upon the belief that art can be a powerful catalyst for urban transformation. It envisions the Tiber as a vital park in the heart of Rome, and Piazza Tevere – between Ponte Sisto and Ponte Mazzini – as its liveliest public space. Here, since 2005, TEVERETERNO has produced cultural events drawing tens of thousands, celebrating the site and its context through vibrant contemporary art, including original works by Jenny Holzer, Alvin Curran, Roberto Laneri, David Monacchi, Nico Muhly, and Kiki Smith.

In 2011, it was recognized within UNESCO’s Management Plan for the City of Rome as an exemplary pilot-project and acknowledged as critical to the dynamic renewal of Rome’s river. In 2015, TEVERETERNO was granted a long-term, 19-year permit to produce cultural programming on Piazza Tevere –the cornerstone of a comprehensive placemaking project for the Eternal City.