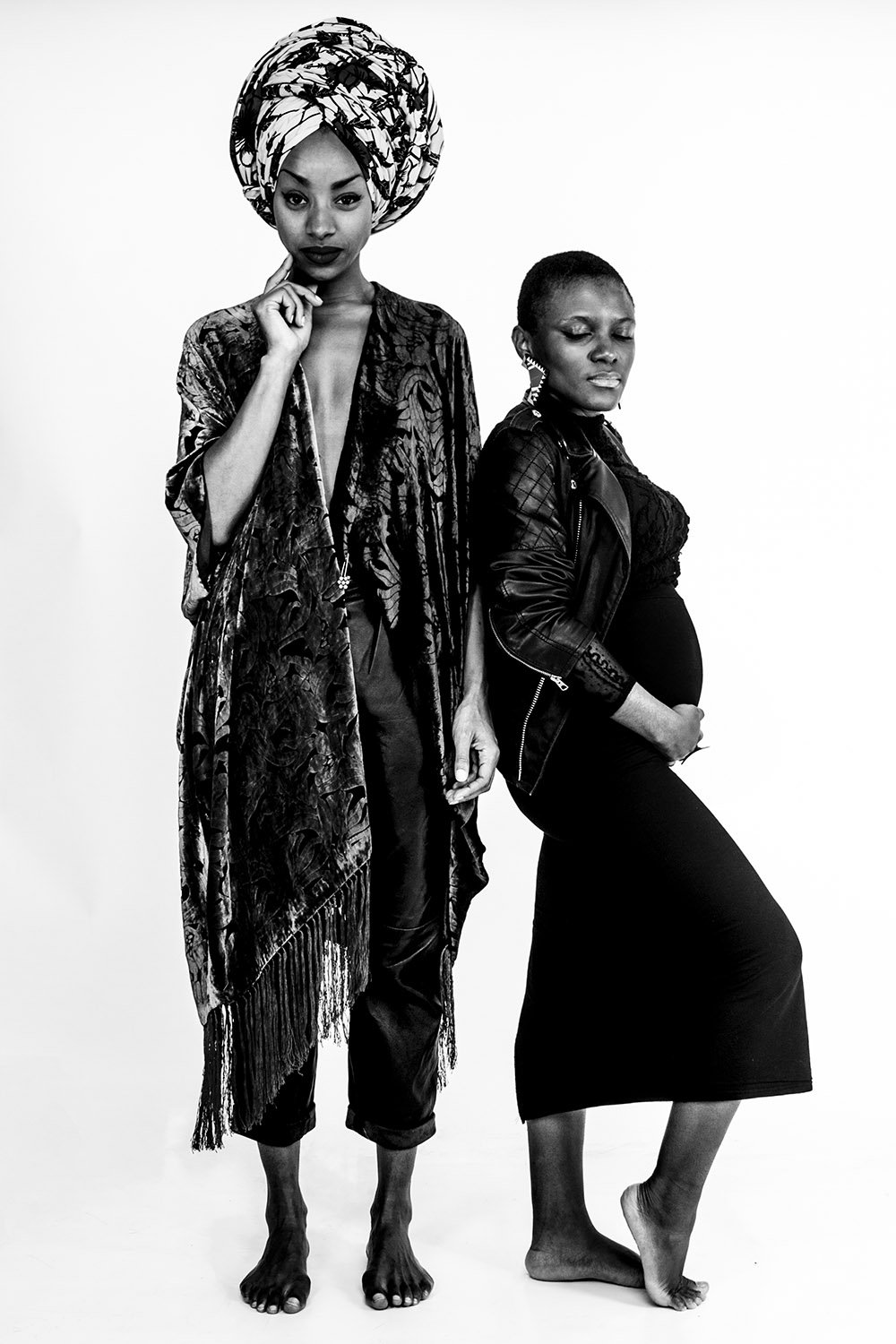 In a world populated by single individuals, where greed reigns and romance is literally dead, we met some of the hottest personalities in Paris to ask them what it’s like to work together and share everything, including the passion for creativity. Love at first sight, seeking and finding, this is what it means to be a creative couple in 2017.

The first meeting is at 48 Rue Chapon, my parisian AirBnb, where I manage to spill coffee everywhere right before the interview. I’m waiting for Càtia Mota da Cruz and Prisca Monnier, founders of Black Attitude magazine, born in 2013 from the genius of these two ambitious and talented girls.

Prisca: I’m a photographer and I’ve lived in Paris since 2011. Before deciding to move here I lived in Johannesburg for ten years.

Càtia: I am an Art Director, but I am also a professional dancer. I was part of the amazing musical “FELA” recounting the life of Nigerian Legend Fela Anikulapo Kuti.
We travelled around the world and ended up on Broadway. So when I got back to Paris after three years of travelling nothing was as exciting as what I had just experienced abroad, I thought…

Where did you meet?

Prisca: I used to curate contents for Miss Black Mag, a blog that was especially created for Miss Black France, a pageant contest that was attracting a lot of criticism at the time. When it all ended, the boss put me in charge of the direction of the blog and that’s when a mutual friend put me in contact with Càtia. We decided to work together and to completely change the editorial and political direction starting from the name. No need to say that it was love at first sight.

Càtia: One day a friend asked me to help her out with a shooting, I had to curate the creative direction and style the models. At the end of the day I was absolutely exhausted, but I realised that it was what I wanted to do next. So a friend got me in touch with Prisca and we’ve never been apart since. Prisca: I have great respect and admiration for Càtia, I think it’s the foundation of a good relationship.

Càtia: Sometimes I have the impression she finishes off my sentences. Prisca isn’t just a colleague, she’s my sister.

Prisca: We know when and how to reach a compromise for the love of the project.

Càtia: In 2013 we decided to start this new adventure and change the name of the blog, ‘miss’ was way too much and not feminist at all. After six months issue #0 came out, it was a kind of trial to test ourselves in a way. The magazine was about fashion, travel, but mostly about black culture and everything we considered ‘black’. I’m very proud of the birth of our baby, issue #1, which you can find in the best bookshops and concept stores including Colette and la Galerie du Jour – Agnès B. in Paris, Bjork in Florence, Mondadori in Italy and other retailers (have a look here).

Prisca: We’ve travelled the globe, especially our beloved Africa, in issue #0 and we’ve covered Congo, South Africa and Morocco in issue #1. We can’t say much about the next issue at the moment, but we promise we’ll take you to lots of new places.

Càtia: Black Attitude is a sort of portfolio via which people contact us to share our view of the world and our style. Who knows which projects lie ahead…

My second meeting is in a theatre. I’m here to talk to Pascal Beugré Tellier and Diane Fardoun about a series of documentaries that explores different types of dance in the world starting from Senegal.

Here dance forms are born locally before being shared, adapted, mixed and reinterpreted. After a long journey, Screenskin [the collective consisting of Diane Fardoun, Hugo Bembi, Pierre Durosoy and Julien Villa] released Out of body, the trailer of a film written and choreographed by Beugré Tellier, in collaboration with Eddy Brière that will be out in 2019.

Pascal: I’m from Ivory Coast but I moved to France when I was very young. I grew up in Tours and at 17 I moved to Paris. I’m a professional dancer, but a few years ago I started writing. I wanted to share what I lived and felt through the screen, reason why I’m now writing my first short film that will be released in 2019.

Diane: I’m from a small town in the British countryside, so I was soon enticed by the capital which is a «el dorado» of people and ideas. I’m a contemporary dancer in the Baraka Abou Lagraa company and I do dance workshops in schools. I love making young people dance and I love doing videos, shootings and performances when I have the opportunity.

During the shooting of Appel à la Danse, it was a pleasure to learn about Dakar’s hip-hop dancers, fighters who dance before each match, a traditional ceremony gathering people from all generations in the Sine Seloum village and many other things. I hope that through dance people will discover the local culture, music and spirituality. A tribute to the beauty of humanity that, while dancing, celebrates and connects body and mind. Pascal: I met Diane in a dance studio in Paris, we used to attend the same classes. Later on, I started giving her lessons and then she proposed a project she had written and she had been curating the artistic direction of. I liked it instantly and then we became good friends.

Diane: I immediately noticed Pascal among all other the dancers, he had such a groove, his spine moved liked a snake, he had his own way of interpreting the given dance routine. I was very fascinated so I decided to take lessons from him and let myself get enchanted by his way of dancing. Soon we realised there was a special energy and empathy between us and our worlds, so we started collaborating and we’ve never stopped since. Beugré-tellitude et Fardounerie was born. This guy is my ally and my adventure companion.

Diane: When you work with someone you need to trust them first, you communicate with your senses. We are dancers, we feel while we dance. We seek each other and we let our senses drive our bodies, it’s very instinctive. I love his universe, I want to get lost in it, to let my soul express itself through his desires. We do the same job, we support each other and we have many mutual artistic partners. We are a family.

Pascal: Going in the same direction but being different at the same time. Diane and I have the same artistic taste but we are opposites. Friendship is also very important to be a winning duo!

Diane: When I perform with Pascal I want to do my best so that he can outdo me and improve further. When you work with a person you respect, admire and share dreams with, the bond is very profound, communication is fluid and artistic choices are shared. I feel a visceral love for him, for his values, his views, his way of being.

Pascal: I held my first event last month, Diane and I presented an extract of the documentary we collaborated on. We also did a live performance accompanied by the music of Julien Villa, our sound technician. The year started well, but the best has yet to come in 2018 and 2019.

Diane: We went on with the idea of Breugré-Tellitude et Fardounerie, we screened a few scenes of Out of Body, the film written by Pascal, and we performed to showcase our choreographic flare. It was an incredible experience. I got the ethos of this project immediately, Pascal asked me to dance and I spontaneously said yes. We have a common language and I’m proud to be his ‘partner’. In the future, who knows!

My third and last meeting is right before a vernissage at Galerie Vallois (that is now exhibiting artists from Benin) with Franck Hell and Océane Bazir-Suzannon, two young promising creatives who recently decided to join forces and build a new fashion and entertainment agency in Paris. Océane: I am from Guadeloupe but I studied in Paris, where I live. I’m a cultural events promoter, at the moment I work at Galerie de Galerie Lafayette and I’m a promotions manager for the creative agency Urban Scale.

Franck: I run two businesses: I’m an architect and a cultural project manager. I used to work for Get2gether Group, but I’m at Urban Scale at the moment, the creative agency I created with Océane.

Océane: We met in 2014 when I joined Get2gether Group.

Franck: Get2gether Group was organising the second edition of Hypefest at The Institute of Design and Fashion at Quai de Seine, and Océane, just graduated, offered to help us out. We’ve become inseparable since then.

Océane: For us working together means first of all to exchange ideas on projects we’re passionate about.

Franck: Working as a couple pushes us to grow and develop. You need to know how to reach a compromise to be successful. We learn from each other’s experiences and we share views as well as tasks.

Franck: Completing each other.

Océane: At the moment we’re investing in various exhibitions our agency is curating. They are about existential themes with multi-disciplinary artists that we’re going to try and meet between June and September 2017.

Franck: We are collaborating on many international projects in the world of fashion and entertainment, but we can’t say much for now.

All images and interview| Kelly Costigliolo – Edited by Celine Angbeletchy