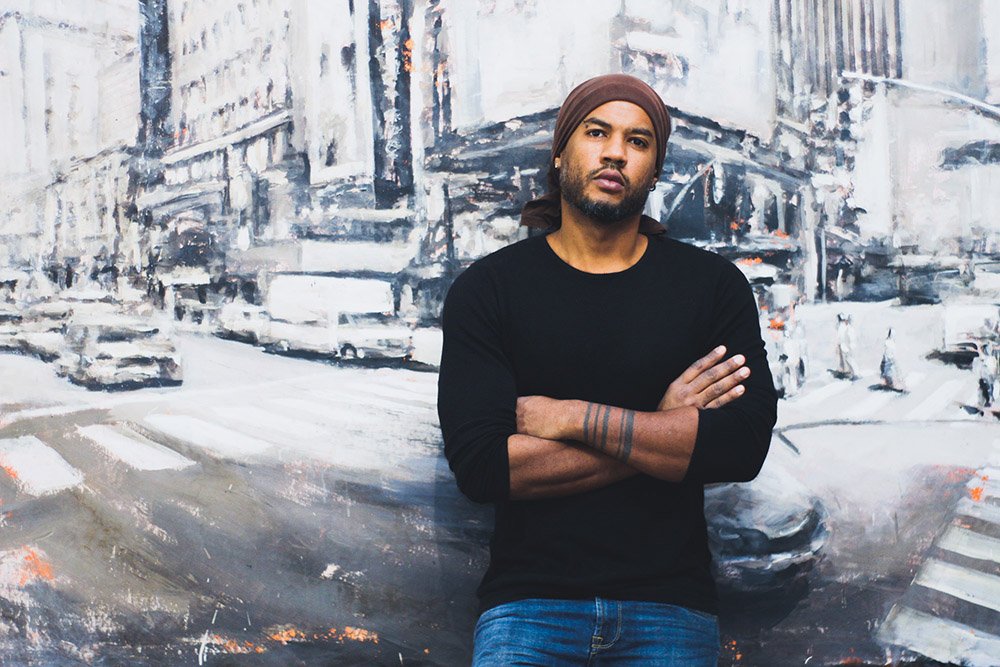 A few weeks ago the news of the event-piece Salvini Nero (Black Salvini) by Luigi Christopher Veggetti Kanku, one of the first Afro-descendants Italian artists in the Italian contemporary art scene (Distanza e Appartenenza, 2018, Rubin Gallery; Arte Fiera Bologna, 2019) who also exhibited abroad (Prelude, 2017, Oil Gallery, Uk; Works, 2015, De Freo Gallery, Göteborg; Happiness, 2009, Broadway gallery, New York) didn’t get the media resonance it deserved. Due to the risk of falling on a slippery slope, such as the migration issue, or perhaps because of the fear of ideological tricks, most of the awaited interlocutors were kept away. Still, Veggetti was expecting a wider debate among the different parts brought into play by the content of his auctioned painting: a black Salvini (the leader of the far-right Italian party Northern League) becoming a migrant in a very realistic painting.

We discussed the outcomes of this project with the artist himself—who was born in Kinshasa and raised in Brianza, Northern Italy—before delving into his work, his painting style, a sort of new bichromatic expressionism declined in either intense portraits or urban landscapes.

GRIOT: Were you expecting a different outcome for your Salvini nero, especially from a media point of view?

Luigi Christopher Veggetti Kanku: Yes, very different. I was expecting a strong response given the social and cultural context we live in. The figures that could have and should have supported this event in order to share the values at stake failed to come forward, no matter the support and the endorsements I had received earlier on. While the right wing, starting from the person I was addressing in the painting, was very careful and quietly started a discussion with me and my collaborators, there was no support from the left wing. The political and cultural faction that I thought was close to me in terms of ideas and sensibility proved not to have the courage to back the project till the end, acting incoherently for the umpteenth time. What’s more, the fact that I declared from the very beginning that I would donate the profit of the auction to an NGO, made me realise how critical and controversial the topic of NGOs is, even for the left wing. Immigration, sea rescues, help for refugees and displaced people are issues that get exploited from both parts and the complete inability to deal with certain topics, including immigration, is now very clear.

Let’s take a step back. What’s your artistic journey?

I started painting in 2002, literally for fun. When I was in high school, studying graphic design, I was in my first group show and I had the opportunity to confront myself with an audience for the first time. Since then, I started painting regularly. That year I received a collaboration proposal from a gallerist who saw me painting in the street and was struck by my portraits. That’s how I made my entrance in the world of galleries. It was hard at the beginning as I was used to working alone in a completely independent and self-organised way, while the relationships with clients made me feel like I was an employee at the gallery’s service. That environment turned out to be different compared to my expectations, those of a young aspiring artist. I felt I had become a production machine and I suffered because of the lack of a continuative rapport with the public. In fact, with regards to me as an artist, I only had to attend inauguration events. As for the rest, I stayed at home, painting alone. As I missed the relational aspect too much, I gave up after a while. I left the gallery in 2003 and I went back to being an independent artist. After a few years, in 2006, there was a turning point: I was contacted by Aurelio Stragapede, a collector who had just opened Galleria Stragapede/Perini Contemporanea in collaboration with space Fitzcarraldo in Milan, who invited me to visit it. I’ve been inside the circuit ever since.

You started with portraits and moved on to landscapes. What made you go for this shift?

When I started, painting was an emotional outlet, a way to recount myself. I’ve never been very talkative, but I found a way to express myself and my thoughts through painting. I was a teenager in a white Italy that paid very little attention to the integration aspect, as well as to all those dynamics related to immigration and racism. So, I poured my reflections on these issues into my paintings. The pieces were very critical towards society. I was trying to represent Africa: at first I used to do it in a very dramatic tone, but then my works gradually softened up through the depiction of women, their strength, their beauty. My aim was precisely to bring portraits of African people and Afro-descendants into Italian homes. With the social changes and the situation evolving, I started representing the city, picking those landscapes that were finally starting to welcome new Italians, as well as other scenes of already cosmopolitan metropolis. You use traditional techniques to make your paintings. What’s your way of working?

I always start from a photo, sometimes from the web, sometimes shot by me. I sometimes ask people to pose either if I think they’re interesting subjects for a piece or if I’m looking for a particular cut. I like experimenting with materials, colours and acids, researching is my traditional technique. The only technological concessions are my camera and my smartphone, especially when I’m outside and I find a landscape I’d like to paint.

As a teenager, did you suffer because of racism and the difficulties of integrating?

As a teenager I suffered a different type of racism compared to today’s, because there were very few people of African origin in Italy. It was fuelled by ignorance and by a sort of curiosity, not by hate, malice, or political advantage. Personally, I’m lucky as I experience less racism today because—thanks to my work— I’ve got the privilege to live in a protected environment, a sort of bubble. However, I sense this nasty discrimination in society, the will of keeping away from anyone different.

Do you think art has—by nature—a social value, the power to make changes happen in society?

Art has an intrinsic social value, because it’s a mirror of reality. Even when there is no direct or explicit social message from the author, a piece of art still remains the result of society and of that it speaks. The connection between art and society certainly exists and it can be highlighted by working on explicitly social issues or current affairs. I think art can be an element that talks about or emphasises certain topics. Which other projects are you working on at the moment?

I’ve got a few exhibitions in the conception and development phase, and others in a more advanced organisational phase, but the health emergency linked to the spread of Coronavirus in Italy and in the rest of the world has forced me to cancel everything. In the meantime, I am working together with New York writer, Jermaine Fowler, on a project of storytelling and representation of African and Afro-descendant people who have played crucial roles in history, from Frederick Douglass to Nefertiti, to African-Italians and even the only Black samurai. It’s an online exhibition entitled Be The Next One and hosted by Fowler’s website The Humanity Archive, which combines my portraits with texts written in prose. This collaboration was born by chance, but I’m very passionate about it and I invite everyone to download the contents.

While you are at home waiting for the health emergency caused by Coronavirus to resolve itself and social and cultural activities to resume, you can download the contents of Be The Next One.