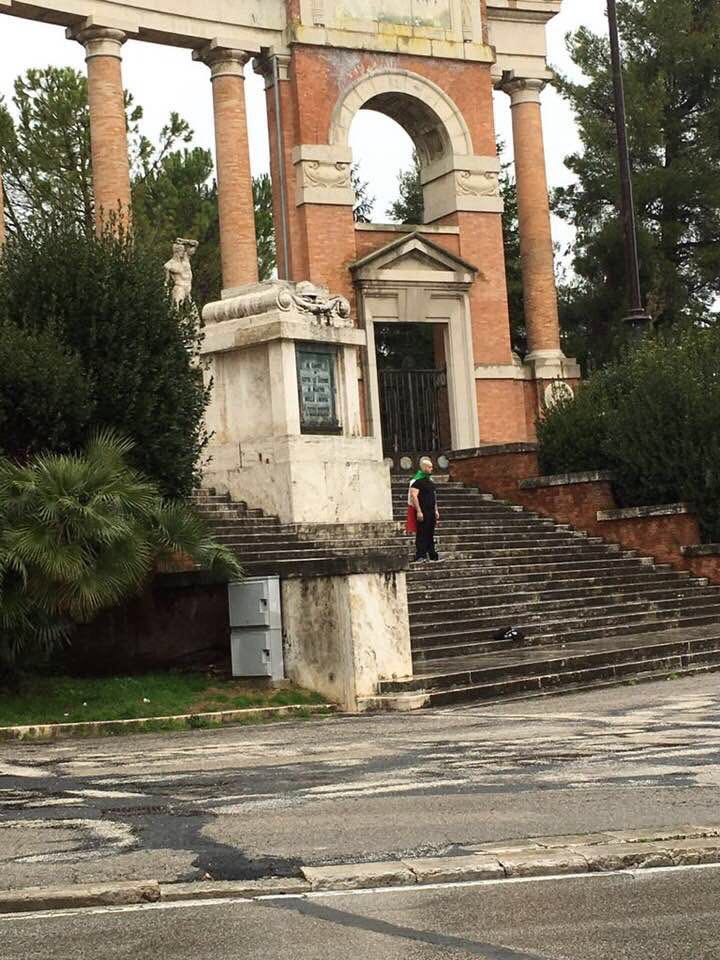 On Saturday I went to the Arcimboldo’s exhibition at Palazzo Barberini in Rome. I really didn’t want to miss it, so I made sure I went before it ended.

After the exhibition I had lunch at a restaurant and then I spent the afternoon with my eyes glued to the phone, scrolling through pieces of news and posts that spoke of the “crazy” attack of an “insane” criminal–as Fratelli d’Italia (right-wing party) leader Giorgia Meloni and some online newspapers reported–who carried out a drive-by shooting targeting “immigrants” whose only fault is to be black. That’s right, they have the same amount of melanin of the Nigerian Macerata resident, Innocent Oseghale, who’s accused of allegedly killing and chopping up poor Pamela Mastropietro, and placing her body into two suitcases. The young girl had escaped from a recovery home for drug addicts and she is the alleged motive for the terrorist act, but I believe it’s just an excuse, a cover up.

The first thing I thought when I read the news was: the hunt has officially begun. Then I thought about the Charlottesville events in August 2017, when a white supremacist hit anti-fascist protesters with his car, killing a woman and wounding many. I thought about the three Senegalese boys shot and killed (Samb Modou e Diop Mor) in Florence by Casa Pound (neo-fascist italian party) militant, Gianluca Casseri in 2011–one of them survived and was left in a wheelchair.

Later, I read the comment of Northern League leader Matteo Salvini, stating that violence is never the solution and it should be condemned, “however” –he intended in the same message–”uncontrolled immigration leads to social conflict”, and then goes on blaming them, us, the victims, because they are black and because they are in Italy, because they decided to “invade” the country. Because they are immigrants.

It reminds me of when Italy lost the World Cup qualification match against Sweden, even then Salvini and Fratelli d’Italia leader Giorgia Meloni blamed foreign players for the Iitalian defeat: “Too many foreigners in the field, from youth teams to premier league, and this is the result. #STOPTHEINVASION and more opportunities for Italian kids, even in football fields. #ItaliaSvezia we’re out. ”Meloni promptly followed up:”For many of us it’ll be the first times since they were born […] The fact is, in sport as in any other field, if you focus on foreigners and neglect Italians, you’ll pay the consequences. Now, please, let’s start from our young people. Long live Italy, even tonight”. So, Meloni, I have a question for you: ‘Who are your youths?’ Oh, I wonder because last June, when speaking of immigration and Ius Soli (the Italian citizenship reform), she stated “there’s an ethnic replacement plan in Italy.”

And what about the Northern League “moderate” candidate for the presidency of the region Lombardia, Attilio Fontana, who said a few weeks ago: “It is not a question of being racist or xenophobic […] we have to decide whether our ethnic group, our white race shall continue to exist or if our society shall be erased”?

Apologies will never be enough then, softening the tones, now, will never be enough when this kind of language has been used for years and years. They are not naive, they know exactly what they’ve triggered. And they wanted it. And here we are now, hitting the point of no return.

Ladies and gentlemen, that’s the way it is, the hunting season has officially begun. I could have been walking there with my son, or other Italians like me, black Italians. Or African tourists, African Americans, Afro Europeans, or Afro descendants, it doesn’t matter. And I don’t say so because I want to distinguish myself from immigrants and feel somehow superior, “I am Italian, an Italian citizen and I do not deserve to be attacked,” but I can’t deny that for some time I’ve been fully aware that my – more and more invisible – Italian side will not shield me from the hatred, racism and growing xenophobia which is addressed only with empty press statements.

This people play on my skin, on my safety, my son’s and my partner’s. On my nerves. On the safety and the nerves of Italians with African and other origins. On the whole country’s welfare.

I feel this tension more and more, as much as I feel the growing refusal of black bodies in public spaces, the sense of impunity in treating black people in a different, scornful manner, because in the meantime both politics and the public discourse seem to have taken this direction. And we’re not taken into consideration because here in Italy our voice isn’t strong.

Salvini and Lega Nord, Fratelli d’Italia, Casa Pound, Forza Nuova and all right-wing parties’ responsibility is undeniable. It is obvious, as well as that of other politicians, and right-wing media (Libero, Il Giornale, talk shows such as Dalla Vostra Parte – On your side) and left-wing media, which allowed fascism and the extreme right to wear an institutional disguise and invited them at talk shows. In my opinion, they didn’t do it for the sake of democracy, but to show off because of their presumed intellectual superiority, to increase by a slight percentage their show rating. Unsurprisingly, you will hardly ever see Italians with African origins in those talk shows, nor they’ll be invited to programs that haven’t got anything to do with immigration, racism and terrorism. And what about the audience? And the authors? How many Italians with African origins are involved? How can you narrate and show the whole country without involving us?

A few months ago, after the many (too many) episodes of racial intolerance experienced by several black Italians, I wrote that today walking in the streets, the cities, the public spaces, with a black body is an act of political and social resistance. I can now confirm it more than ever.

One could write thousands of words, we all know that this attack will not remain isolated, but it will happen again under various forms that don’t necessarily involve the use of weapons.

Being aware of the dark times that my country is going through won’t stop – I hope – my will to try and improve things, to continue, together with other people, to do what we are doing, to talk about arts, music and culture, and to design and organise projects and events surrounding these fields, to be light-minded and fuck around when we want. Of course, we’re afraid and pissed off, but if we give up, we will inevitably end up in a cul de sac and  it’ll be even harder to come out of it. We need to meet, talk, devise cultural strategies together. Seriously, we need to do it.

Words by Johanne Affricot | Edited in english by Celine Angbeletchy