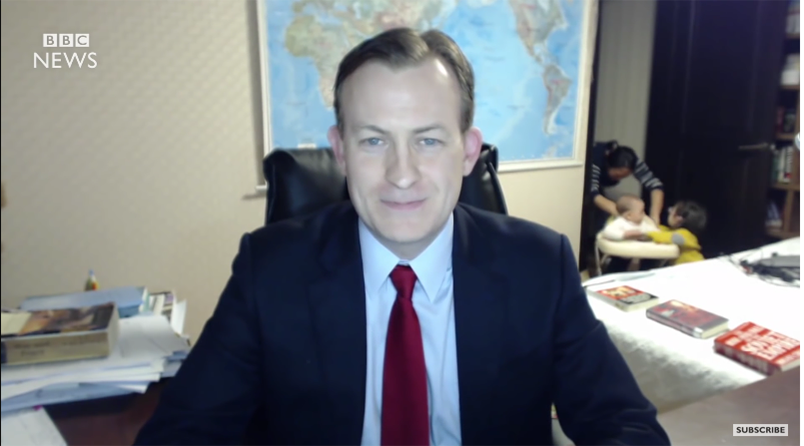 You’ve definitely seen it. For sure you are among the 14,304,626 viewers who, on March 10, were cracking up at the sight of the child busting into the room when her professor father — all gussied up in his jacket and tie and perhaps naked from the waist down for all we know — was being interviewed live via Skype for the BBC on relations between North and South Korea.

For sure you laughed when the other baby came into view in the walker. You probably nearly peed yourself when you saw the woman enter the scene like a tsunami to grab the two kids and shut the door. And we laughed. And surely you thought she was the child-minder, the babysitter, the nanny — but not the mother.

A couple of years ago, I was talking with a friend named Caroline. She has two beautiful children who go to a famous private French school in Rome. Both of them are lily white, with light chestnut brown hair. She has curly hair. Her skin colour is the result of the mix of a (“white”) French mother and a (“black”) Ethiopian/Eritrean father. She tells me that often when she goes to pick up the kids from school, other adults assume she is the babysitter. And apparently her kids tell her that their schoolmates themselves make the same assumption.

The white Roman bourgeoisie at this French school found it hard (and still find it hard) to believe that people of different races could come together to make a family. They find it hard to believe that a “non-white” woman could be the mother of children who attend a prestigious institution. They have trouble imagining her working as a manager of a big international organisation or NGO. They don’t see her as a possible teacher in an elementary school, or a university professor, or a doctor, or even as a housewife who manages the home-front and picks up her children from school.

That white bourgeoisie is the same bourgeoisie that thought that the woman in the video couldn’t have been the mother of those kids. But they aren’t alone in their thinking. No, no. A lot of people thought the same thing. People of different classes. People of different races. And probably even Koreans themselves. Even my American cousin who is married to a fine blonde-haired, blue-eyed man wrote a post on her facebook saying that when she was on vacation in Seattle, a woman told her that the children that she was taking care of were beautiful and asked if she was their babysitter. And this only because they were slightly lighter-skinned than her. (If they had come out white, maybe she would have taken her for a kidnapper?) The fact is, even I fell for it. And so the obvious question is, Why? Why did even I make that assumption? Because my eyes, our eyes are blinded by a dominant narrative. They are clouded by stereotypes, even though we live in a world that is increasingly ‘mixed’, despite the fact that we work to document this mixed world. It’s true of course that TV and movies are no longer in black and white and silent, but the hierarchy of colour and voice is the same. Little has changed. And every day we are reminded of the existence of this hierarchy.

The white person on the small and large screen is still there, omnipresent, eating up all of the roles, while people of colour — especially here in Italy— are relegated to roles like nannies, drug dealers, mean rappers, losers, criminals, prostitutes, etc. (I am not arguing, by the way, that they only play these roles, in particular when we talk about foreign programming.)

Think about the power of representation — both behind the camera and in front of it. The power to tell a diversity of stories, to give these stories a platform, to make them visible in movies, on TV, in newspapers and magazines. Images of everyday life in hospitals, schools, universities, courts, supermarkets, post offices etc.

“Yeah, but look how sloppily she was dressed compared to him.” Personally, if I’m at home looking after the kids, the last thing I’d wear are high heels and an evening gown.

“Yeah but the older girl didn’t look anything like her. She doesn’t have almond-shaped eyes and she was almost blonde.” Neither my friend’s children nor my cousin’s children are the same colour as their mothers, yet they are their children just the same.

And if those weren’t her natural born children, maybe they were adopted.

“The woman was scurrying around with her head bowed in a submissive way, like a Geisha.” Ok maybe this one passes… No! Absolutely not.

The truth is that the road is long and tortuous and that we all fall short now and again. Some more often and willingly than others. Others often but involuntarily. Others rarely but they trip up just the same. Like me. The point is to be aware of it, suck it up and to insist on telling stories with more and different colours and voices. Like this one here.
https://www.youtube.com/watch?v=egw9jEXPShU