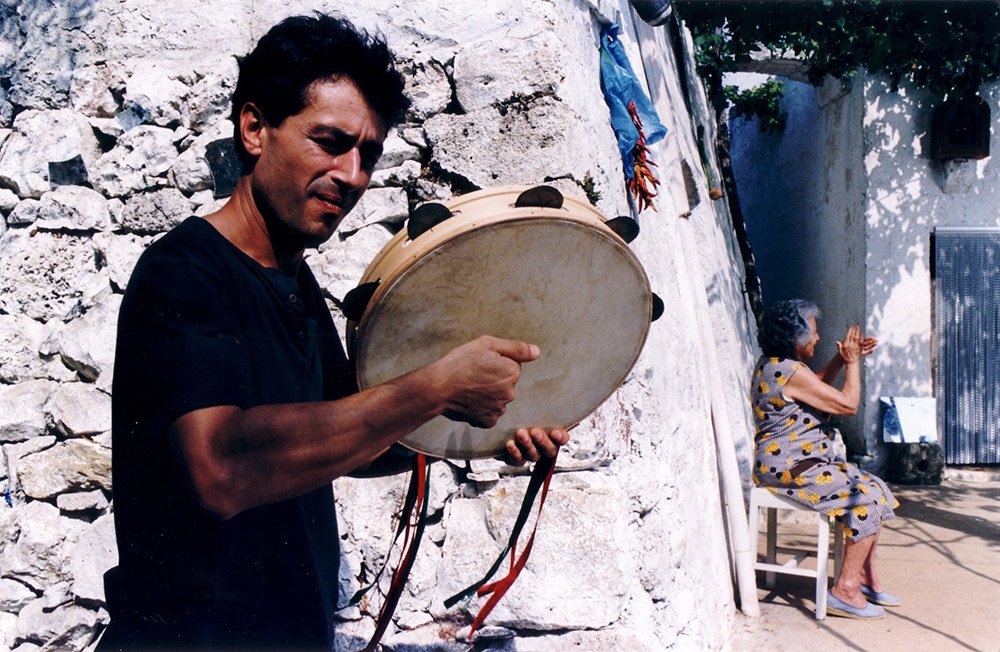 If all we had was the written word, the ephemeral mysticism of rituals would be completely lost on us. We would run out adjectives faster than the performers of a ritual — in their temporal ecstasy — ran out of breath. Eventually, the performers regain their breath, leaving the witnesses — us — lost for words, grappling to describe an event that was never meant to be contended with but to be experienced: to be felt, seen, heard, touched? It is this dearth of language that confronts all who attempt to describe any ritual, including but not limited to the Southern Italian ritual of Tarantism.

A source of fascination for many scholars and tourists alike for decades, Tarantismo has been generally described as “hysterical behavior” or a “dancing mania”. Conscious of the limits that words encounter when faced with the liminal space between a tangible rational world and an intangible transient realm, it is a relief that many have attempted to capture the essence of Tarantism in words. At the same time, it is almost certain that they have failed to various degrees because rituals typically evade such attempts with ease. Even so, a recent project by swiss cultural engineering platform Flee about Tarantism is a particular pleasure to sit with, not because it has succeeded in describing Tarantism, but because it has framed a liminal “peasant” tradition as a global aesthetic.

If anything, this last effort might be considered Flee’s mission. Tarantism: Odyssey of an Italian ritual is their second project, coming hot on the heels of another project that explored a Kenyan genre of music known as Benga. Each of Flee project is foremost an artistic and aesthetic exploration via image and sound. The output is usually niché and low key but unusually thorough and deep: think vinyl and a rare commitment to print formats and exhibitions, add hazy Swiss vibes to that equation and voila! Flee is not someone’s job, it is someone’s passion, and this shows on every single project. In this case “someone” is actually three people, Flee’s founders Alan Marzo, Olivier Duport and Carl Åhnebrink. Flee’s project on Tarantism is audacious, seeing as the ritual has been at the receiving end of commentators and cultural producers claiming a “renaissance”, which in many cases is of their own discursive making. Nevertheless, they seem conscious of the thin line they are straddling between a “peasant” culture almost completely erased from the memory of the transalpine region and a dance and music phenomenon that promises a real economic and identity stake in Salento, the Apulian home of Tarantism whose economy is pegged on tourism. As Flee rightly notes, Tarantism is the reflection of the daily lives of millions of individuals, as well as extremely complex power relations through which cultural dominance and “difference” is mediated.

By handing over the retelling of the history of Tarantismo to established Italian scholars of the ritual, the project takes a calculated risk by setting its sights onto the aesthetic and artistic re-interpretation of elements of Tarantism. The project includes a double LP featuring five original recordings from the early discoveries of Pizzica—the sonic component of Tarantism—and six unique reworks by seven artists from three continents: Bjorn Torske & Trym Søvdsnes, LNS, Uffe, Don’t DJ, Bottin and KMRU, who was also part of their first project in Kenya. An exhibition cycle is also in planning following the release of the project which will include some of the audio and visual material published in the project, as well as additional material.

Meanwhile, the impact of Tarantism remains unswayed by society’s interpretations at home and abroad. For almost a millennium, Tarantism has consistently challenged hegemonic visions of how the world functions, posing a formidable rival to both religion and science. While experiences of the sacred have become increasingly rare, they have also become all the more attractive to a world that is in many ways disconnected from its source—whatever that may be.

In many ways, Tarantism remains a proposition to transcend and subvert reality via a complex ritualistic system which, according to one of the most respected Apulian scholars of Tarantism, Luigi Chiriatti, “is structured according to its own precise rules and operating methods”. In my reading, Chiriatti’s definition of Tarantism is least limited by the aforementioned inadequacy of language in the face of ritual: It is “a projection of the individual, through an external agent—mostly the spider—into a dimension distinct from everyday reality.”