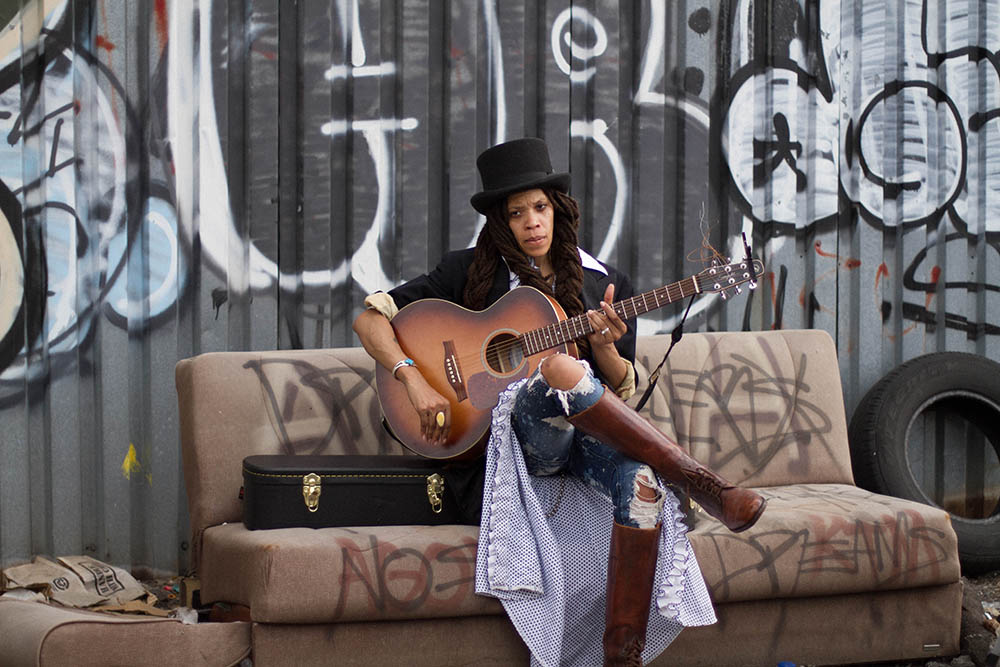 Omega Sirius Moon, a performer and musician who grew up in Virginia and then moved to Brooklyn, seems to have landed straight out of New York in 1962 – a moment of real artistic significance. This was the time where Andy Warhol’s factory was taking form, hosting and collaborating with great visual artists like Basquiat, and also musicians of all types. This relationship between visual art and music finds contemporary expression in the poetics of Omega Sirius Moon.

Few months ago saw the release of her latest work, Rebels and Romantics, for the independent label OSM Creative Suites. The album represents the most complete and unapologetic statement made by the artist. In the song Noir, Sonic Youth style dissonant guitar chords and stories of war assault the listener. In Take My Hand we feel dangerously seduced by melodramatic atmosphere before being ultimately overtaken by magical, even distressing sensations.

The video for Take my Hand, made in collaboration with the Italian videomaker Daniela “Zoe” Croci, represents the culmination of Omega Sirius Moon’s recent work. Exploring the world between the analog and the decadent, the conventions of the screen dissolve as we are taken on an often abstract journey through magical places and urban decay. Time itself is morphed into a surreal dream.

We caught up with Omega Sirius Moon and asked her a few questions.

GRIOT: You live in Bed-Stuy, a district of Brooklyn that has been undergoing a process of gentrification for several years. How much inspiration do you take from the place in which you live, and how significant are the changes that are happening there for your creative process?

Actually, we influence the gentrifiers. That’s why they are coming here: for the energy, the culture, the vibe – and the real estate. Bed-Stuy has been the source of inspiration for me for over 10 years…way before the gentrification began. It’s a place where people say good morning to each other, where neighborhoods are made up of friends.

We have the most beautiful Saturday mornings you’ve ever seen. The dopest block parties. Amazing Herbs. The dopest House parties. Super creative and beautiful black folks. We have been dope and artfully progressive way before gentrifcation.

As a matter of fact, Bed-Stuy being labelled such a dangerous place preserved the culture for a long time, because very few white folks would come through. Now the newcomers are here in droves. The culture has been diluted in some ways and enriched in other ways.

A lot of families were and are still growing their own food. And Community Gardens were an option, if you knew about them… but pre-Trader Joe’s, a lot of us were getting our fresh and organic options all the way in Manhattan, at a place called Life Thyme Market on 6th Ave.

Now Bed-Stuy is littered with places to get healthier food option but at outrageous prices. I saw a box of granola cereal that was $8, just the other day.

You are both a musician and a visual artist. In what ways do your art and your music inform each other and how significant is the visual content in your music videos?

My studio is a room filled with books, amps, guitars, art supplies, works in progress and an Alter. When I am in the space working on visual art, I draw upon multiple resources simultaneously. Firstly, everything starts with music – not even my day can start without that. So I’m usually spinning vinyl, watching a Kung-Fu flick or music videos – with the sound down. I also have BBC world news on the radio, turned down low, the vinyl cranked up loud and all my books and tools are at arm’s length.

I honestly don’t know where the visual experience begins and the auditory experience ends, or vice versa. I become at once antenna and transmitter. Receiving, projecting and documenting everything.Of course the visual side of the music videos are important. Being a multidisciplinary artist, I often conceive the entire vision.

The technological quality of my music videos haven’t always been the best but the content is an extension of the vision. In some cases it is the vision.

I feel it’s important to give the viewer an alternative experience, a shift in consciousness. Something more than lip-syncing to a track with the camera rolling. They can get that experience and more at a show. I like to send folks on a visual journey and expose and share little pieces of myself in the process. You were born and raised, initially, in Virginia, land of the Blues and then you moved to New York, a city of rock (past and present.) How do you try and bring together these two strands in one unified concept?

Aren’t they one in the same, Blues and Rock? I got two words that prove they are: Chuck + Berry! Historically we know that Rock is a derivative of Blues and anyone with a discerning ear will agree. The only major differences lies in the subject matter and the BPMs but same rhythms, same guitar riffs. My favorite rock wave is the punk scene in Tokyo and Osaka, Japan. Free, wild and contagious. Lots of screaming, vomit and mosh pits. It’s liberating.

After touring Europe and Asia pretty regularly over the years, there are countless rock and hip-hop scenes I’ve been exposed to. They all transform you a bit. After every gig you are a different person. Every song you fall in love with, afterwards you become a different musician. We are the sum total of all our experiences. Perhaps it’s also being a vinyl DJ that exposes me to so many genres and sub-genres of music from all decades, all countries.

It’s also about the process of digging through records for hours and hours, playing things I’ve never heard of, searching for gems. You slowly realize that good music is good music. Period. Genres disappear. Only the sensation the music gives you remains, regardless of race or geographical location. Music is so much bigger than these little tiny boxes many people put it in.

I know that you are about to have an exhibition in Brooklyn. What’s the topic of it?

It’s called The Tinkerings of a Cantankerous Wizard. A show about nothing and everything. The viewer is taken by the universal merkaba directly into the nucleus of my subconscious mind. Walking the corridors, they’ll find sacred geometric formations, odd vortexes, interrupted time continuums, African fractals and hidden symbols, keys and messages from ancient civilizations. It opens at World Money Gallery in Bushwick, Brooklyn, on Ocotber 23 and runs through November 6.

Rebel & Romatics is available on Itunes.