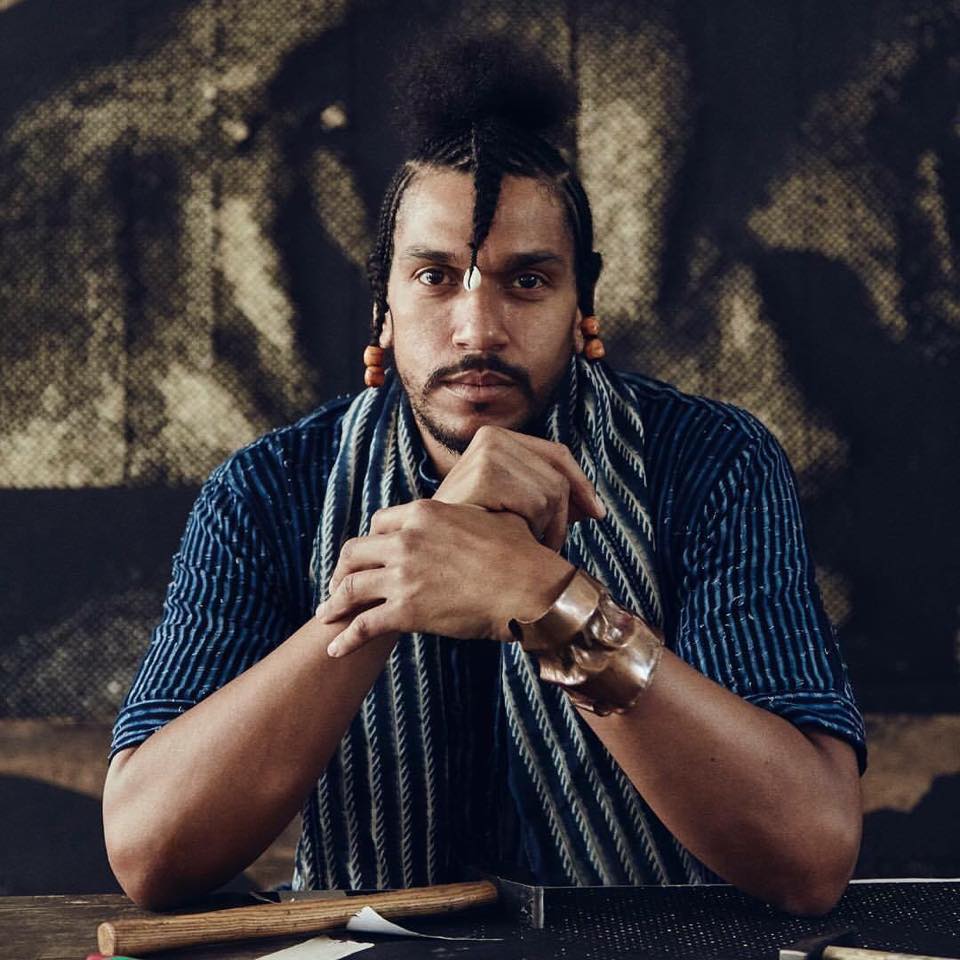 Friday, November 10, Peskine’s atelier in Issy-les-Moulineaux’s petite ceinture parisienne. While I make myself at home, I don’t realize I’ve just put my orange juice on a piece of work until he actually points it out to me.

Alexis Peskine is born in Paris – on the same day as my father (September 29, 1979) – from Brazilian mother and French-Russian Jewish father. He is one of the indisputable talents that exhibited at Carreau du Temple on 9-12 November for the second edition of AKAA – Also Known as Africa, the first contemporary art and design fair in Paris showcasing the works of African artists and from the diaspora.

6.5 ft, 15 shoe size, Peskine is a cosmopolitan soul, like his past. His eyes are very sincere and his hands are as big as the world he represents with his art. During the interview, he NEVER stops working with his assistant, he even hands me a brush to help him take off the gold leaf from the nails which are applied at specific height in a specific order, in order to give a sense of three-dimensionality to the work.

The smell of earth and coffee which he uses to age the wooden plates spreads in his two storey 43m2 studio. The works are arranged here and there with a certain taste and there’s a special set up for the arrival of the at enthusiasts on Sunday morning.

Alexis Peskine’s career begins at the age of eight, when he starts asking questions about his identity. Raised in an artistic environment, he started a BAC PRO in graphic design in Paris at 15, but after winning a NIKE Camp scholarship two years later, he kicked-off his career in the United States thanks to basketball. He began his adventure in Chicago and Atlanta, then landed at the Maryland Institute College of Art (MICA) in Baltimore, where he graduated with excellent grades in 2003.

Having been interested in painting and screen printing, Peskine realized that he wanted to find his own language which he then further developed at Howard University in Washington, the Mecca of African-American intellectuals.

In 2004, during his second Masters degree, his love for “acupuncture” began: the nails become a symbol of energy, in fact they recall the “Nkisi” fetishes of Congo, but not only. They refer to Christ’s passion, to the physical and even psychological pain of transcendence, as well as to voodoo rituals.

At the time he was only 25 and he was no longer the Parisian teenager he had left in France, the States had given him the opportunity to mature and express himself: he had become a “woke“, which translates as ‘a person aware of the African question’. “I remember I needed a place to create in New York. At that time, I did not have much money and I was looking for something. So I went to Eric Chapeau, my mentor at Hoboken, and I told him I needed a place to work. He asked me how much space I needed and I said a few meters would be enough, so he gave me the keys and told me I could work there for free. I worked day and night, it was perfect.”

Everything begins with a photo portrait that, after some retouching on Photoshop, is reused and then redesigned through various materials, including nails and wood. The subjects portrayed are all anonymous people with African origins, who well represent the Black Experiences in the US that means the experience of black people of African descent on a global level. In Peskine’s color palette, black is the only exception to the primary colors, which are used here and there in a vivid and accentuated way. The nails are then covered with gold leaf (a technique an Italian guy taught him in the US), painted or left as they are.

Old and modern techniques meet and give birth to stunning, strong, sometimes moving pictures. The figure’s eyes catch the viewers’, as if the artist could actually represent their soul through a portrait.

When he graduates in 2005, after 10 years in the United States, it is time for Alexis to return to Europe, to his parents’ home, where he starts working in his garage. “It was not easy” he tells me, “my friends used to help me all the time. I often need assistants, two at least, four even better.” In 2009, he had a five-month residence at the 59th RUE DE RIVOLI in Châtelet Les Halles, and in 2010 his first exhibition in Paris finally took place.

After crossing his fingers for a long time, a friend told Peskine he had seen him in a dream. So he made a vow and brought three bottles of milk and a packet of sugar to the mosque. Weirdly enough he was the artist selected through a public competition to have an atelier in Issy-le-Moulineaux City Hall: a free space, all of a sudden. “I often travelled back to Bahia with my parents when I was little. Almost every year,” he reveals when I ask him to talk about Brazil and his relationship with this country. “In 2013, I collaborated with the ‘Giving Back’ association and the Pierre Verger Foundation for a couple of months on a project in the Brotas district. There I taught my technique to young people and eventually I managed to bring the same project to Senegal, to Morocco, but this time without anyone’s help.”

In 2016, he took part in the Dakar Art Biennale and at the Mondial des Arts Nègres Festival, which brought 6,000 visitors in the capital this year. Needless to say, Peskine’s relationship with Senegal is very strong, and it is also the place where he prefers to work and where he hopes to buy an atelier one day. “As a Pan-African, it was important for me to know my origins” he reveals. In fact he decided to drive back from Dakar to Paris with a friend and to return to France crossing the desert by car, day and night for a week.

The artist is also very interested in photography. One of the pieces that best represents him (and his favorite as well) is Aljana Moons, the representation of masculinity, identity and paternal relationship of black man through the rites of “Diolas” Senegal and the conditions of the “Talibé”.

Peskine’s work is the look of society on everything that is different. The pop spirit and its figurative touch make us vibrate as high as the artist’s intentions for the future. When asked, “What are the projects for the future?” he cannot answer nor reveal anything for the moment, but a return to the United States is very likely in 2018.