SPAZIO GRIOT | The Body Speaks Of Identities In Sorry, But I Feel Slightly Disidentified…

Through a game of movements, gazes and disguises, the artistic duo formed by Benjamin Kahn and Cherish Menzo recounts the performative nature of contemporary society and people’s assiduous need to assert their identity, Camilla Giaccio writes. 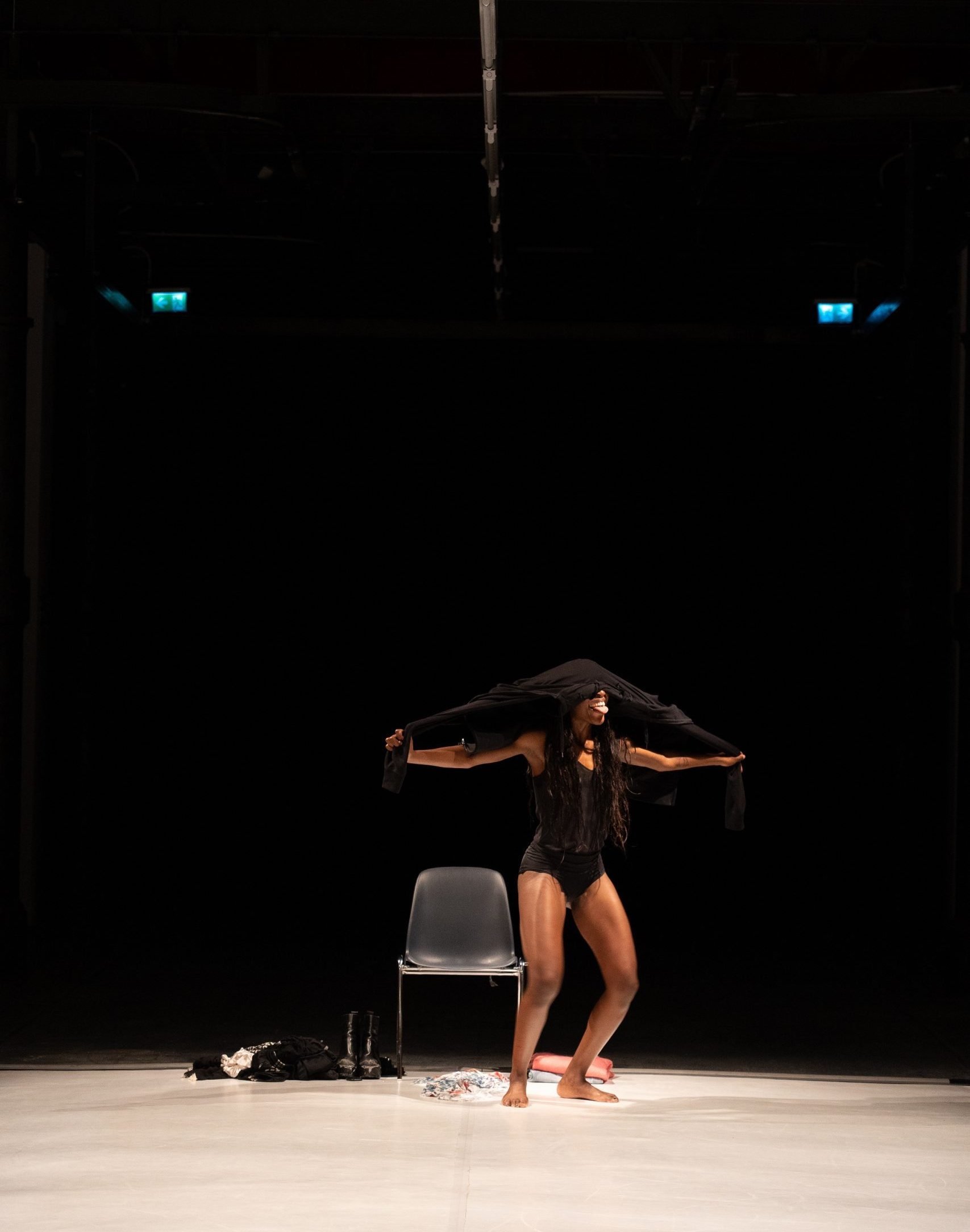 A single body inhabits the stage of SPAZIO GRIOT at the Mattatoio museum in Rome. Yet, multiple figures emerge and come to life to tell a plotless story of fleeting moments of existence. Devoid of any kind of morality, she, he, they overcome the space to the rhythm of music, while liquidly turning into a constant alternation of seemingly unstoppable movements and sudden manifestations of absolute silence.

“The main hope of harmony in our anguished world lies in the plurality of our identities, which weave together and work against one single hardened line of vehement division that allegedly cannot be resisted”, economist, philosopher and Nobel Prize economics laureate Amartya Sen writes.

The search for the self in our contemporary society and the alienation of the individual when confronting cultural stereotypes deprived of meaning and historical and socio-political values are the central themes of the solo performance Sorry, but I Feel Slightly Disidentified… by French dancer and choreographer Benjamin Kahn, for and performed by Dutch dancer and performer Cherish Menzo.

Menzo’s metamorphic body movements, accompanied by the musical sequence directed by Kahn, guide the viewer’s gaze on a journey of research and deconstruction of cultural-historical prejudice of recognizable contemporary identities. Although distant from each other, the stereotypical identities that emerge in this work—the figures—are magically interconnected by a need for self-affirmation within a social environment that surrounds them.

Throughout the performance, the gaze that rests on the dancer’s moving body is continuously constructed and deconstructed in a kaleidoscopic representation of social and cultural identities. The boundaries between gender, sexual, social or emotional identities blur in a collage of masks that establish a relationship of both understanding and repulsion, as well as surprise, eroticism and exoticization with the viewer.

The performance begins outdoors, in the Mattatoio courtyard. A human figure whose face is covered in black wears an outfit made of Arab, Indian and African fabrics and decorations that blend together in a single body merging their cultural recognizability. The figure acquires a magnetic ambiguity that eludes and nullifies the stereotypes supposedly embedded in the mind of the viewer.

The audience is invited by this mysterious presence to enter a space that is as physical as it is metaphorical. Freed from the adornments that previously coloured their body, the figure now soars upward, immediately acquiring a spiritual dimension. Between fiction and reality, a chair at the far end of the white floor that marks their space of action constitutes the moment of return to reality, the moments of silence in which Menzo rests, wipes off her sweat, breathes deeply.

Fleeing identities are revealed and displaced in the viewer’s imagination. The contemporary sense of estrangement is manifested by interpreting now a muscular, strong male body, now a sensual and provocative undressed woman. The performer’s gaze that meets ours is provocative as she conquers her space by forcefully slamming her uncovered body against the surrounding void.

The political character of the performance is revealed in the relationship between the observing eye and the body of an Afrodescendant woman. In the work this constitutes a medium through which the relationship that exists between a recognizable subject and the legacy of information it suggests in the mind of the beholder is unveiled. The game that Menzo establishes with the viewer concerns the accessibility of the same point of view, highlighting the need to release confusing socio-cultural associations far removed from the experience of those who still find themselves in a condition of marginalization, both personal and collective.

On this theme, the performer recounts the dual significance she experiences in the essential question of the search for one’s self. Through her work and life, she seeks to free herself from the judgmental gaze of others while retaining a strong sense of responsibility to her own origins at the same time. “In a utopian world, I would be fluid, constantly changing, but to this day we still need that, to affirm ourselves,” she adds later.

In a context where reality seems incapable of asserting itself, the performative character of Cherish Menzo’s body movement and the alternation of musical tracks impeccably arranged by Benjamin establish a precise rhythmic structure whose narrative content escapes at the very last moment to give way to the following metamorphosis. Our restless present is transmuted into the dissonances that distinguish one figure from the other, where the only element that seems to unite them is precisely their movement in space, and their reappropriation of the latter.

As Kahn recounts, a boy who dresses a certain way—and moves by consequently adjusting the movement of his body in a performative gesture of gender recognition—highlights his desire to exist in the world and to find a form in which to express himself. But what if, instead of seeing it as the construction of a figure, of a “fabricated” act, we sought to abandon the performativity on which the figure itself feeds? What would be left other than silence, darkness, the bare skin of a motionless body that with each breath rises and roots itself to the ground in an endless succession of empty spaces? Empty space and silence are central to the work of the artistic duo. “How long can we resist silence?” Benjamin wondered. How long are we able to be patient in moments of emptiness to discover and listen to ourselves, before the frenetic spectacle of life begins again? The figure suddenly stops, returns to their chair, and gets dressed again, this time in a salmon sweater and light-coloured jeans. A European girl, an ordinary woman who perhaps refers to the most dissonant and frightening figure of all. Like any other person, she gets up, walks toward the center, and smiles at us. Darkness.

‘Sorry but I feel slighty disedentified…’, a solo by Benjamin Khan for and with Cherish Menzo was part of SPAZIO GRIOT’s summer artistic program SEDIMENTS. After Memory. It includes an exhibition (June 30-September 4) with Victor Fotso Nyie, Muna Mussie, Las Nietas de Nonó, Christian Offman, curated by Johanne Affricot and Eric Otieno Sumba, and a public program with a final event on Sept. 1, a performative action by artist Muna Mussie at Pavilion 9a of Mattatoio museum in Rome.