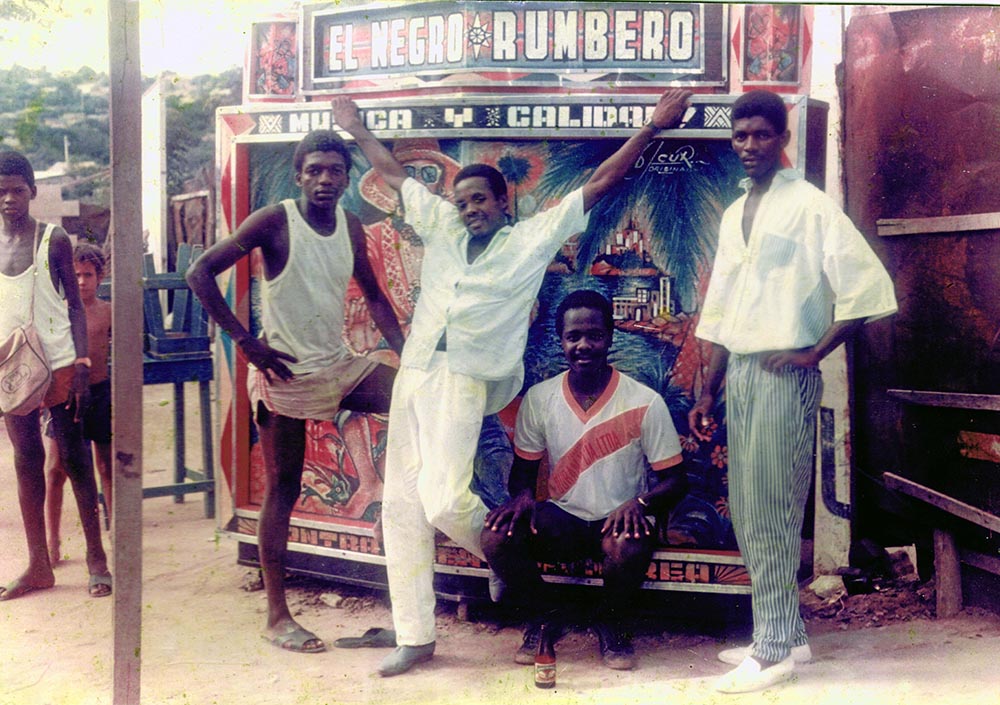 “It is truly right and just, our duty and our salvation, always and everywhere to give thanks, to whom is engaged in propagating worlds that enlarge and nurture out mental horizons”.

God, if I had to confess to a priest that I have used a part of the Preface I of the Advent – “The two comings of Christ” to thank Invernomuto rather than our Holy Lord I believe I would be immediately excommunicated. I am sure though that Pope Francis would give me a wink and welcome me in his flock. In the end, I don’t really use a made up verse from the Bible, like Jules Winnfield before killing people.

I have to admit it, Malù – The Stereotype of Black Venus in Italy, video-essay by Simone Bertuzzi and Simone Trabucchi [Invernomuto], from the Nero su Bianco exhibition, was the work I have appreciated the most. It is also true that the sounds from pico music and their colors remind me of my Haiti and its cammionnettes – or tap taps – so one could think that I am biased but really, gratitude is well deserved when you deal with artists who manage to translate (sub)cultural dynamics into stories of extraordinary interest, using a rich language of contaminations that appeals to heterogeneous audiences.

And this is also thanks to Andrea Caputo and Luca Martinazzoli from the Plus Design gallery, who captured and shared the obsession of Simone Bertuzzi for picòs, making a limited series (for a total of 15 picòs made in Colombia and commissioned to Barranquillere artisans and five others commissioned to European designers) and invited the duo to bring this culture on stage through a documentary and a festival. But the question [the thousands of questions] comes spontaneous: what is Sonido Classics – Festival de Maquinas Musicales exactly and how was it born? Is it a show? A festival? A documentary? Where does one begin and where does the other end? What the heck are these picòs? And these DJs… are we going to attend a soundclash or what? And the street, what role does it have?

This is where the nitty gritty is, because, after a long chat with S&S [not SS] I can tell you that it is not a single story but an alchemy of continents, (g)locals identities and migrations of sounds, pivoting around the will of connecting and celebrating the many street cultures from the suburbs of the world. Anyway… let’s try to get a little more in detail. “It all starts from picòs”, they say, “enormous sound machines that animate the verbenas (street parties). Their traditions date back to the 1960s and has origins in the Colombian coast, especially in the cities of Barranquilla and Cartagena. Northen Colombia is quite important for the history of migrations as it represented a dramatic entrance gate for thousands of African slaves, but through which passed technologies, cultural products and most importantly, music.”

Every picò expresses the visual identity of the DJ and owner through drawings. Dairo Barriosnuevo, Barraquilla anthropologist, in this teaser (watch it!!) he says a picò “is a Colombian drum playing African music”.

That’s fantastic. As you said, a large selection of DJs and international producers will be in command of the picòs, each with its footprint. I am wondering, speaking of stylistic contamination, what is going to come out and also how the soul of pico music will be perceived.
We believe it is going to be halfway. We are suggesting everyone to work not with one geographic direction only. Myself [Palwine – Simone Trabucchi] and Jim [Primitive Art] are having a set together and we are going to play several Colombian genres starting from the ‘60s, contemporanean remixes and global bass. We are also going to play many of those records we have bought when we went there [to Colombia].

Ckrono & Slesh are playing a little cumbia, a quite antique genre, typical of several areas of Latin America. It has several nuances and it was born with quite orchestral sounds. Ultimately, several producers of electronic music, especially from Argentina, start from traditional cumbia and created club versions. DJ Rupture has done quite some research. His musical course crosses all continents. Just think that the day before the festival he is going to play at the Frost in Copenhagen with Omar Hayat Maâlem, equilibrist and master of the Moroccoan gnawa. Palmistry, British producer and singer, is going to go deep into dancehall and singing techniques. Daniel Haaksman, a German among the first playing Brazilian Baile Funk in Europe, is one who moves around many places in the world. Sarah Farina’s set, in the yard, will be more UK-bass, very close to reggae and dance hall. Staying in the theme of sets driven by the Jamaican tradition, I (Still – Simone Trabucchi), having had a project starting from computerized dub, will propose a digital dancehall inspired by the moment between the ’80s and ‘90s, when digital/electronic technology landed in Jamaica. A very precise time and rhythm. Well, there are several musical contexts. We really like working in certain geographically peripheral areas – they are quite big actually -, spend time in the transits, dealing with these mixed objects with so many components inside. These are the elements on which we have worked to build the line up.

The most part of the DJs are from the US and Europe. Was it more complicated to involve Colombian DJs?
Unfortunately, we could not fulfill certain wishes, especially because of budgets [the festival has no sponsors] and bureaucracy. We wanted to bring dj El Rata, from Colombia and dj Lakhe, from Durban, who is very active in the GQOM but who has been denied a visa for some reason. This is a beta version, so we will see what happens.

Two locations with two different approaches. The festival starts at 6pm in the Plus Design gallery where the show is. Then at 11pm the dancing crew from Perù Nueva Creaction de Humanda Ayucucho Peru, will lead a street parade from the gallery to the Ex Cinema Aramis/Striptese, Buka’s headquarter.
Exactly. Think that Plus Design is at the first floor of a building but we rent four more galleries on the ground floor for the 13th. They are all in an inside yard. The idea is to have a block party. There will be picòs in every room. Two of these room will basically be stages and host the various DJs from 6 till 11. Surely, the sounds will be softer, but the starting idea, as requested by Plus Design, was to think about a line up to make you sweat. You know what I mean. Then from 11, the event at Ex Bazzi, a much larger situation, with a bigger sound system… a proper party. The experiment in the gallerie is the most important one as it is the most particular. We are done. Well, no. I have seen the teaser of the documentary. How was shooting in the streets of Baranquilla, how was the reaction of the locals?
As Jamaica or Ethiopia, it is quite a complicated place when it comes to certain things, like going around with cameras, tripod, gear and our white skin. It was not always so simple. Let’s say we did not have the same freedom of movement you can have in other places.
Jim, who is of Colombian origins, was of great help, fundamental let’s say. And Fabian [Altahona Romero]. It all comes from him. We have been in touch for five years. In 2007 he opened Africolombia, a blog where he collects African music –yes, African is what they call it, without any country specification – and parallely started publishing these photos of picòs. I really go into it [Simone Bertuzzi] and after finding out they made smaller-scale replicas of picòs, I asked him if he could make me one and ship it to me. Plus Design saw this object and they go into it just as well. So they asked us to conceive together the possible development of a project, the documentary we are editing these days.

Last August we left for twenty days. Obviously we had some contacts and Fabian opened up the doors fo us to meet many people to meet and situations to dive into.

As always, it is hard to have a quite specific idea before you actually get in one place. It is hard to write something and having a schedule is useless most of the times. But sometimes you find yourself in totally unexpected situations, incredible and sponataneous.

We tried to cover everything: the various artisans pivoting around the world of picòs, like the interview with Master William Gutierrez, the painter who makes most of the drawings of the picòs; the interview with the artisans who makes the sound boards and then all that world that makes them work: the picoteros, the DJs, those who make the placas, who speak, MCs basically [they record these verses that will be played in the sets with the picòs]; then we interviewed some of the historic musicians of Champeta we managed to find. Cutting close, the feedback was generally positive also because the situation has quite changed with respect to the past. In the ‘70s and ‘80s there were only street parties, of large dimensions. Now the government has put some regulations and is trying to bring everything in yards or clubs or even to forbid them. And this would be a real shame.

Line – up and event