Sculptures | The March On Washington Through The Lens Of Alessandro Rizzi 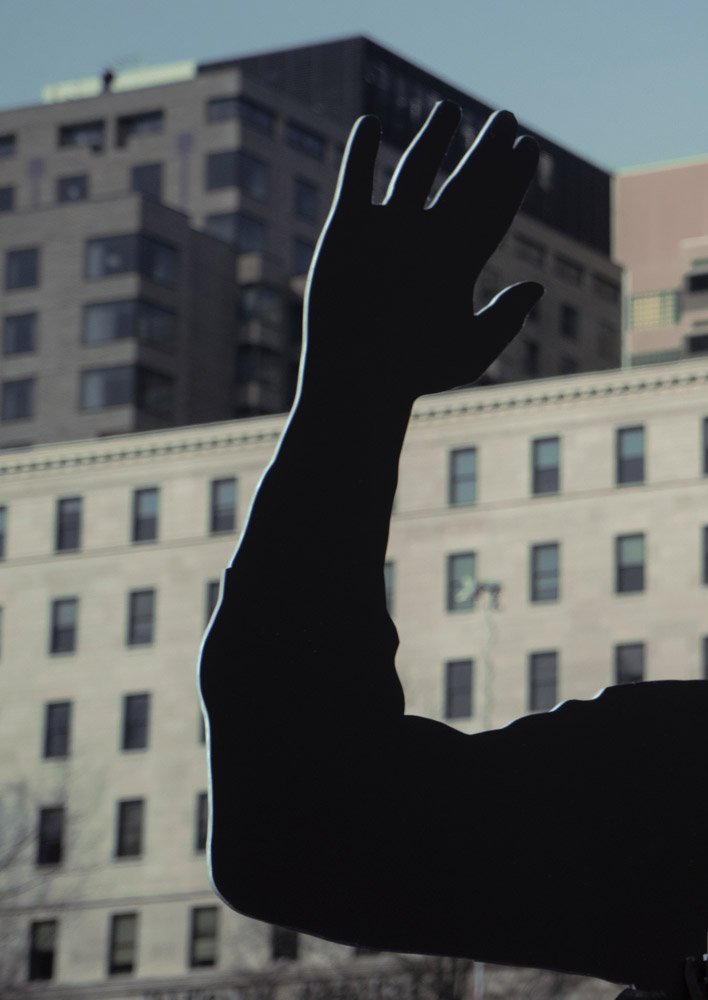 Going through the pages of Sculptures my tactile memory went all the way back in time and it felt like hearing my mother telling me “don’t put your fingers on the pictures because you’ll spoil them”. A recommendation that is well rooted in the habits of those who printed photos on paper, despite the coming of the digital dark age, almost fulfilling Vinton Cerf’s omen.

A book, an instant book, portraying the story of the march on Washington and of the thousands of people gathering to protest against police violence after the deaths of Michael Brown in Ferguson (Hands Up, Don’t shoot) and Eric Garner in New York (I can’t breathe) through the lens of a European, Italian photographer, Alessandro Rizzi. “Can a love extend until touching the deepest ropes bonding society? And can a personal story become the access to the heart of civil rights?” Two questions you asked yourself before leaving for Washington. In this project, with respect to your past works, for the first time you have worked on two levels: one is emotional and intimate, the other is social. Tell me all about it.
Both in questions and answers the two levels are always intertwined. Questions were to me the keys of all the reasons that pushed me to leave, even if the emotional level has played a fundamental role.

Why?
From a conceptual point of view this project condenses in one day only – 8 hours – a huge work I made about myself, with the idea of what I could do and that I had to be honest to photograph something that had my look on one side and that had an idea of presence, testimony and a personal history on the other.

A love story of four years with Veronica, an Italian-African-American girl, who has put me in contact with a world I had no idea of, with realities coming straight from her American family in Chicago and related to the condition of African Americans. And so I started going deeper, reading and learning more and more. When Ferguson happened – August 2014 – I was shocked on a personal level because it was a world I was detaching from – her and I had broken up in June – which was still deep within me: all the people I had met, their stories, their families. Of course, the interest was also private, as a citizen and photographer, aware of the world spinning around me.

For the first time I had felt the desire of participating without initially knowing how. I was asking myself “what do I do?”, “how do I do it?”, “what kind of photographer am I?”, “how do I want to share it?”.

When in the summer I overheard there would have been a march in Washington, I remember thinking “OK, this is the moment”. A single event allowed me to go pull my strings, working on more technical levels: a more authorial photography, private and made of details. A photography that entered in bigger dynamics.

Some images from Scultpures recall the attention on some details that represent America in the popular iconography. It feels as if you were suggesting to use them as a key to get deeper into a global vision.
Yes, indeed there is. I have called them the “epiphenomena”, small phenomena that tell a bigger story. I really wanted to show all the various present universes. There is the boy with Nikes on his feet, technical jacket and brand new accessories and the middle-aged woman, in fur, giving you the idea of a person who has reached quite some awareness about her own self. There are religious groups who have seen the march as a great opportunity to bring their message forward, thanks to the enormous media coverage and the presence of so many people, giving their own interpretation about the problems of the American society. A very radical interpretation, some time apocalyptic. Then there are photos of people, bodies, statues-sculptures, distributed in some kind of social pyriamid, expressing all its fragility. Every statue is there, taking position, but stuck in its idea of being part of a different and separated category. An aspect that really bonds with the image of blue wooden planks, conceptually expressing the impossibility of exiting a closed world if you see yourself within a closed world. All subjects and groups that ignore each other on a daily basis, staying split but that, on that day, created the same aspirational tension of being willing to be part of a same culture.

Why did you not choose a reportage? Wasn’t it maybe more immediate to share the facts?
The work a photographer can do is to shoot a photograph, a shot of an instant but loaded of precedent work. A work of analysis. I did not go there to show this event through the lens of a reportage photographer lens, who shows you his own position in the pictures. In this project there is no position. At the beginning, before leaving, I started from the idea that the book should have been called “A story of love and brotherhood” but then, when I saw the final result, other things about myself came through: I am an analytic photographer who does not do emotional photography.

The book has been gathering quite some interest, especially for the fact it is the result of eight hours of shooting. This is a detail I like to point out because in general, speaking of documentary photography, we have challenged this secular assumption of projects having to last only months, if not years, to be valid.

The assumption has been challenged because, to know something, a context, it is not just about being in the situation but also asking yourself some questions before even starting the work: who you are, what position do you have, and what kind of photography you choose to do. These are fundamental elements to me. Tell me about the audio tracks.

The book is the first step in a project on three main levels: photographs, their tracks and the accounts written on a diary. All together they form the corpus of a more immersive exhibit.

Alessandro Rizzi is presenting ‘Sculptures’ at the Labò space in Bologna in May and is holding some workshops at Link Lab in Milan next June.

All the images | Courtesy of © Alessandro Rizzi