“Studying Giotto is like studying Dante. For this reason, art history will return to schools in an important way.”
So said Dario Franceschini, the Italian Minister of Culture and Tourism, at a conference held last January to present Rai channel’s project “Italy: Journey into Beauty.”

I often hear my Italian friends complain about the art history taught in middle school, the field trips to churches and Renaissance art museums that they had to visit, often so boring that, even though years have passed, the thought alone causes hysteria and allergic reactions that cannot be cured by even the best psychologist or palliative care.

But think again, friends! Giotto could become your favorite artist thanks to Early and Northern Renaissance paintings recontextualized by Montreal-based artist Scorpion Dagger, aka James Kerr. Kerr considers himself “fairly politically inclined,” and his work lends itself to commentary on “critiques of religion and modernity.

These are Renaissance paintings gone wild: nuns behaving badly, noblewomen jumping out of paintings to take a cigarette break. The sober hand of religious iconographic paintings has been slapped away and Kerr has stepped in to rearrange the discourse with darkly comedic GIFS to tickle your fancy.

Back in 2012, when Scorpion Dagger was a fledgling tumblr site, Kerr promised to put up a new GIF every day or so, and he has not disappointed.

Initially wanting to improve his animation skills using copyright-free images from the Library of Congress’ digital collection, Kerr ended up creating an artistic genre entirely his own. His artwork is a mash-up of carefully selected elements from at least 10 to 20 paintings, using Photoshop, to create GIFS and more recently, short videos.

Now, by the good grace of a successfully completed Kickstarter campaign, Scorpion Dagger’s oeuvre is transmuting into an Art Book with Anteism Publishing.

Don’t worry! It won’t be your regular art book, otherwise you’d risk losing all the irreverence. Through augmented reality with his media partner Metaio, the book will be a collector’s item in which you can explore Scorpion Dagger’s animations through a custom app for your smart devices.

Come for the acerbic wit, stay for Jesus as Slash.

Peruse and appreciate Scorpion Dagger tumblr where it all started http://scorpiondagger.tumblr.com. 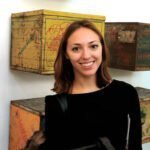