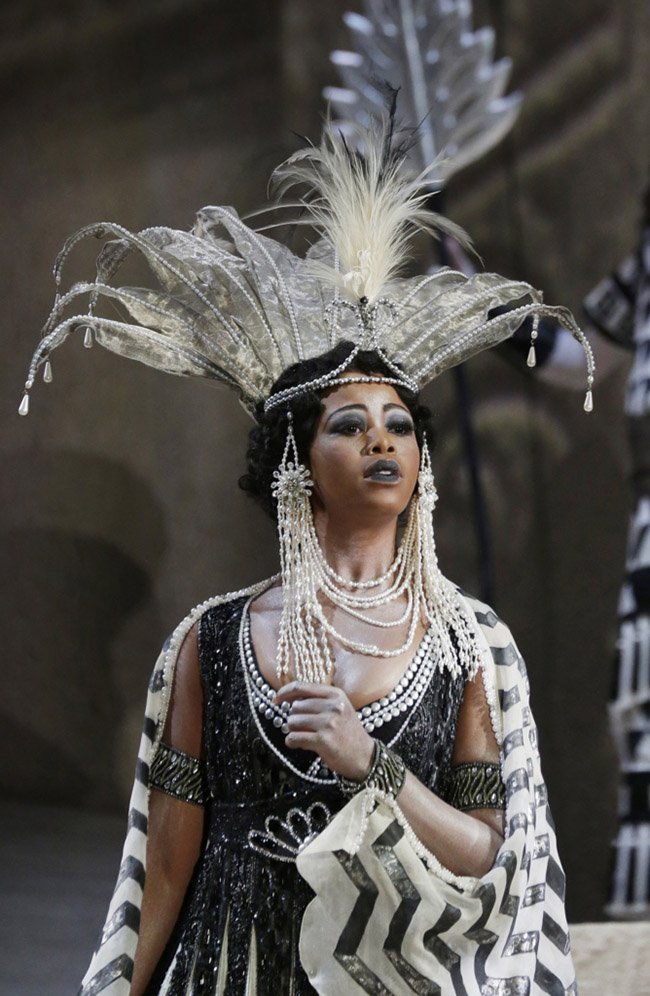 “Everywhere I go, I meet people who are so passionate and so in love with music, and they see the South African girl who’s just started this incredible journey and this wonderful adventure of music, that it seems really like watching a Cinderella story in our modern time. […] A girl who has a dream and who sees her dream being embraced by the global stage.”

Who would ever believe that a British Airways TV advert would lead a South-African 16 years old girl born under the Apartheid to become a opera star known worldwide? Yet, this is how Pretty Yende’s fabulous journey started.

Born in Piet Retief, a township situated in the Mpumalanga province, South Africa, Pretty Yende is the first-born of a modest but happy family of four children.

In a few interviews Pretty Yende explained that when she discovered opera through an ad featuring Léo Delibes’ Flower Duet, she immediately ran to her music teacher to “demand” him to teach her something “supernatural” and divine. That was what opera sounded like to her, but at the time, she did not even know that her discovery had a name: opera.

From that moment, Pretty Yende’s life utterly changed. Giving up on her accounting studies, she went against the flow and chose to devote herself to lyric music.

“I had a dream, and my dream came wholly true”

There is a sense of destiny in Pretty Yende’s journey. As if godly hands had scored and shaped her future to turn into a modern fairy tale story. As she discovered the mysteries and the power of her beautiful voice, the young soprano enrolled at the South African College of Music. Consequently, she won several international contests, among them the Montserrat Caballé International Competition of Singing, which paved her way to enter the prestigious Accademia Teatro alla Scala in Milan. There, the young woman met with the great names of opera, such as Maria Callas, Montserrat Caballé and Jessye Norman.

Making her debut in 2010, at the National Theatre of Riga, in the role of Micaëla in Bizet’s Carmen, Pretty Yende’s career takes a surprising new turn, when, in 2013, she is called last minute to replace the top of the bill, Nino Machaidze, as Berenice, in Rossini’s Le Comte Ory. This opportunity opens the doors of the Metropolitan Opera of New York. However, something quite unexpected happened while she was on stage: she stumbled over and fell over in front of 4000 people. But, rather than panicking, the soprano chose to stand up again and to keep doing what she is good at. She was there to sing, and she wanted to sing.

The least that can be said, is that her performance was a triumph. It turned her into an opera star. Nominated for the International Opera Awards in 2017, she won the Best Recording Solo Recital Award for her album A Journey. The same year, she was awarded the International Achiever Award by the South African Music Awards.

Throughout her young career, Pretty Yende was offered many illustrious roles, among them La Traviata’s Violetta. This role is among the most challenging characters created by Giuseppe Verdi. It is famously said of Violetta that it necessitates almost three separated voices: the coloratura, the lirico spinto, and the lyric soprano. For a young singer, “Violetta is a defining role in many ways,” which requires “a certain maturity artistically, but also as a woman.” For that reason, it took Pretty Yende a long time before she accepted such a role. In 2019, she was invited by the actor director Simon Stone to perform the eccentric Parisian socialite in a modern version of La Traviata. Embodying a Kim Kardashian-like character set in contemporary Paris, Pretty Yende’s performance was a beautiful, moving experience, as well as a subtle interpretation of Verdi’s work. It also proved that Violetta can be performed by a black African woman without shocking the supposed sensitivity of French audiences.

During the lockdown, French people got another chance to meet Pretty Yende in Massenet’s Manon as the Paris Opera implemented a free online access to its 2020 opera season. The role of Manon was almost moulded in the form of a Josephine Baker straight out of the roaring twenties, and the 35- year-old South African singer was absolutely stunning.

Music is universal, it has no shape or colour, and opera, although it is known for its elitism, is no exception. Pretty Yende incarnates a generation of young African women in the manner of Pumeza Matshikisa or Noluvuyiso Mpofu, who are making classical music transnational. With her voice and joie de vivre, she drags down prejudices and clichés, and inspires many young black women who thought it was impossible for them to try opera.

Through her exceptional, dreamlike journey, Pretty Yende offers a new visage and a breath of fresh air to opera music. She is the living proof that impossible does not exist.