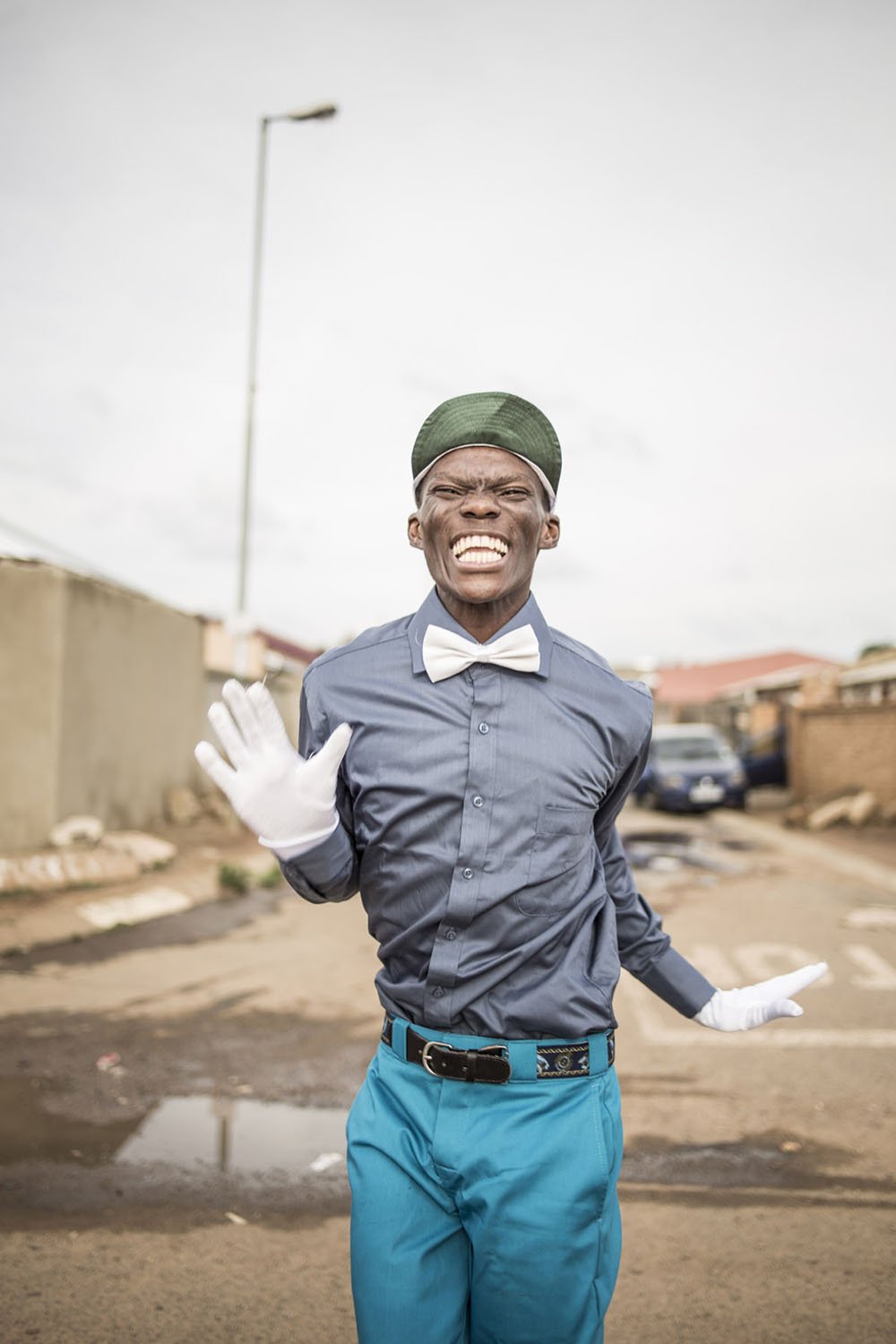 During AKAA, the first contemporary art fair in Paris dedicated entirely to African culture that takes place every year in November at the Carreau du Temple, I had the pleasure of spending a couple of hours in a café in Paris with Chris Saunders.

Represented by the NATAAL and having recently joined the La Belle Façon agency, Chris Saunders is a photographer and videomaker from Johannesburg.

Having followed the Pantsula – a movement of promising young South Africans street performers –  for five years, alongside the Pantsula dancer and coreographer Sicelo Xaba and the researcher Daniela Goeller, Saunders created Dance 4 LYF, a book and an exhibition opening on January 29 at UCLA’s Fowler Museum in Los Angeles. The pantsula community can trace its roots back to the 1940s in the legendary, multiracial Johannesburg suburb of Sophiatown. It’s a mix of contemporary and modern dance, jazz and hip-hop and everyday’s gestures. For this group, gestures, sounds, colors and clothing represent a lifestyle.

The name Pantsula has its origins in a Zulu word that means waddling like a duck, a reference to how the fashionistas of the 1970’s strutted down the streets with a posture tipped slightly forward, which can also be found in many traditional South African dances.

Pantsula dancers articulate their identity in specific poses or signature movements indeed, and fashion continues to play an important and highly symbolic role in the dance. The images, featured for the first time at 2015’s Lagos Photo Festival, capture all these components in a detailed manner.

We talked to Chris Saunders about Pantsula, what it means to him and the future of this culture.

GRIOT: You grew up in the south of Joburg and when you were 12 you moved to the north of the city. How would you describe living in such different areas?

Chris Saunders: Johannesburg is a big city, very fragmented. I think growing up in two different places in such a vast city taught me about exploration and adaptation. Two very important elements to photography.

Where and how did you become involved in Dance 4 LYF?

I started documenting Pantsula in 2010 while I was on a 1 year residency at Fabrica, Benetton’s Creative Research Facility. They were working on a Dance issue and I began my first documentation on the Pantsula dance crew Real Actions Pantsula for the magazine COLORS. I always found it ironic that I had to go all the way to Italy to fly back to South Africa to shoot an intrinsically South African series.

Why did you want to talk about Pantsula?

Pantsula is a fundamental part of Johannesburg culture, Johannesburg is the city I grew up in. It’s a very divided city stemming from the history of Apartheid, a city where many important cultures and mechanisms of recording and telling history were formed, one of them being Pantsula.

I felt that by documenting Pantsula I was documenting a form of storytelling that was the closest to the true history of the city, a culture that developed in the townships around Johannesburg where many black people were forced to live.

This culture developed there, it told first hand stories about the culture in those places and I felt it was important to capture such an immense piece of the culture of this city, the city I grew up in and later realised I knew so little about.

How did you meet Sicelo Xaba?

Sicelo is a very well known dancer from the famous crew Red For Danger. He grew up in the culture and it only made sense to co-author the book with him, he knew the history and lived the lifestyle.

Working with him was fantastic, he was our main partner in the project and a co-author of the book. Without Sicelo the project would have lacked inside knowledge and it was important to collaborate with a Pantsula dancer of his stature. It’s also important to mention Daniela Goeller. Daniela is an independent researcher originally from Germany. As a team we could tell the story from different perspectives, me visually, from the source and from a research perspective. Hence the reason we decided to co-author the book.

Is there a connection between the Pantsula & the Shangaan Electro?

They are linked in the sense that they are both modern dance forms born from a mixture of traditional practices, both are linked and developed alongside music.

However, Pantsula is an older culture with a strong heritage dating back to Jazz and Swing, it lived through Apartheid and came out as a very developed rich culture. Shangaan Electro is a very modern dance form and culture and is very much linked to Nozinja, the originator of The Shangaan Electro sound. He took a singular traditional music and dance and modernized and publicized it.

So they are different in the sense that Shangaan culture is linked to Shangaan Electro and Pantsula is very much a non-traditional practice, it has many different traditional dance forms mixed into its dance moves but is very much its own original and new culture.

As a white photographer, what was it like creating this project and what did it mean to you?

I think as a white South African it was important for me to learn and document South African culture, growing up in separated areas as children we often didn’t have exposure to Johannesburg’s vibrant African culture, but when Apartheid ended and I grew up I began documenting what I felt were Johannesburg’s most prominent and somewhat relatively undocumented modern cultures and subcultures. I felt it was important for some form of documentation to have been made and that there were resources to try and understand these different incredible cultures from the city and country.

Where do you see the future of Pantsula?

I believe that culture is ever adapting, like many modern cultures, many of the dancers share and communicate via WhatsApp and post videos online.Tons of dancers have started touring the world on their own accord. I see it as a culture born in South Africa, where it finds its inspiration but as a highly presentable art form, a mechanism of story telling, just like ballet or other modern dances.

It’s a form that will continue to develop and the dancers will as always stay dedicated to it as it is more than just a dance, for many of them but a lifestyle choice.

All that I can hope is that the public will support and pay to see original performances and work with the great choreographers that are coming from the scene, allowing it to thrive and grow.

The Pantsula book is ready to be published. You can help them to print it by supporting the crowdfunding campaign launched by Crowdbooks and ending on February 5.

All Images | Courtesy of Chris Saunders