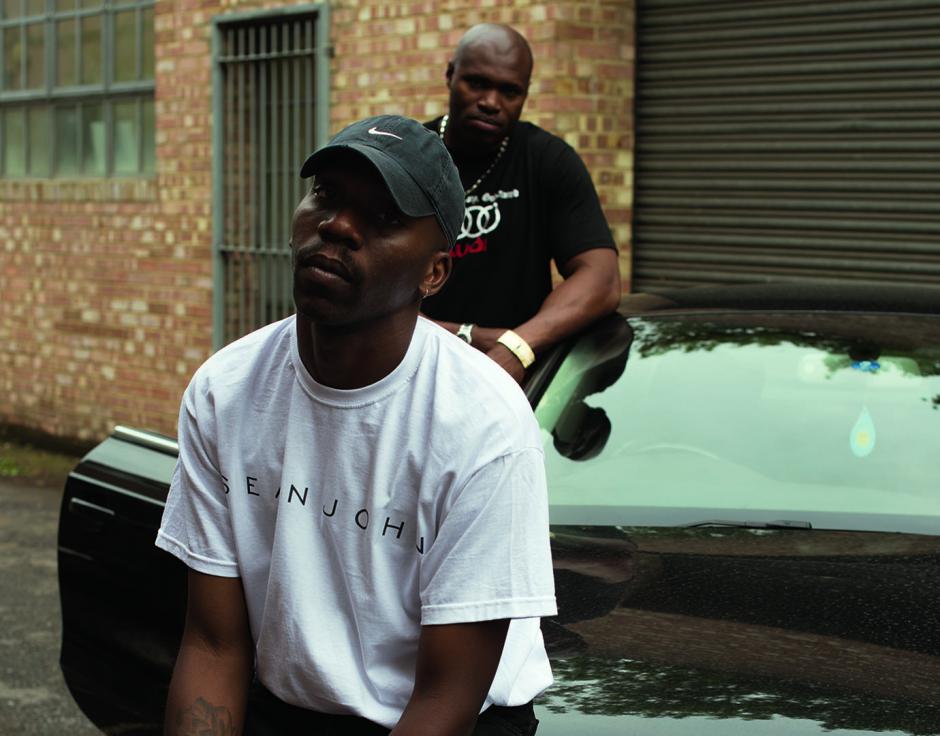 Photo by Nick Waplington via

Whether you think he’s an infallible provocateur or a misunderstood genius, the truth is: he does not care. And perhaps, this is what makes him one of the most impactful artists contemporary Britain has ever produced. Dean Blunt is the British musician whose work encompasses the whole spectrum of avangarde lo-fi, hazy, electronic sound from hip hop to opera.  He’s one half of avant-garde project Hype Williams, alongside Russian-born artist Inga Copeland (aka Lolina), as well as the mind behind Babyfather and Blue Iverson.

Scholar and founding member of the London Black Study Group, Dhanveer Singh Brar — whose research covers theorizations of black diasporic sonic culture from the mid-twentieth century to the present, the question of form in the black radical tradition, and the politics of black critical thought — has recently published a new book-length essay exploring modern Britain and Blackness in Britain through Dean Blunt’s 2016 album ‘BBF Hosted By DJ Escrow’, his first album as Babyfather. As stated by the South London-based press collective the87press which published the book, “Dhanveer Singh Brar looks to initiate a conversation that needs to be had about Dean Blunt, about Britain (through Blunt’s indifference to it), and about Blackness in Britain (through the depth and complexity of Blunt’s feeling for it)”.

In a 2017 unmoderated conversation between Dean Blunt and Gaika about microaggressions, hyper-masculinity and resistance in post-Olympics London, Blunt argues: “I’m just done with playing in the UK. It’s not like a big deal or anything, I just told my agent I’m not playing here anymore. There’s a certain arrogance that comes with accessibility to our culture, and when we give this access to certain people, there’s a look in their face that makes you wish you never… It’s less an issue about the UK and more to do with the same old white privilege I guess.”

As philosopher, poet and scholar Fred Moten puts it, with his essay on Dean Blunt’s music Brar helps us “to sense Britain—to uncover with ‘accuracy, brutality and beauty’ the complexities of its meaning—through the social music, social vision and social feel of those who refuse the Britishness that is withheld from them. Brar discerns Dean Blunt’s rightful place in a cultural field where critical discourse and sonic dream are fundaments of a dub university curriculum whose various approaches show the absolute necessity and generativity of stealth, flaw and the resistance to category. Blunt’s “love letter to the blackness of Hackney” deserves the most rigorous, gentle, erudite attention. Happily, Dhanveer Brar is here to provide it.”

Beefy’s Tune (Dean Blunt Edit) is available here. Read an excerpt from the book below.

One of the easiest things to say about Dean Blunt is that his music lacks seriousness. In fact, one of the most common laudatory assessments his work is given is that it is a labyrinthine orchestration of the absence of seriousness delivered with a veneer of solemnity. Blunt is considered something of a performance art prankster, skilled in using the most affectless deadpan to build layer after layer of in-jokes, nods, winks and sly asides. This is thought to be the cause of the compulsion-repulsion effect that surrounds him. The latter view is based on the notion that his schtick is nothing more than an elaborate method of accumulating social and cultural capital which, at best, exposes the corrupting effects of the contemporary conjoining of art and experimental music. The former favours Blunt precisely for his exposure of the flows of capital within arenas which purport to support and generate aesthetic (as well as social) radicalism.

Early on in the development of such a hermeneutic, Kodwo Eshun signalled that, perhaps, there might be a rush to judgment on both sides. His 2011 review of a set of Hype Williams releases gives conceptual purchase to a guiding imperative of their sound. What he calls Hype Williams’ “insistent inappropriateness” shapes the way in which on albums such as One Nation (2011) and Find Out What Happens When People Stop Being Polite, And Start Gettin’ Reel (2010), they use Wiley lyrics as titles for tracks which never go close to the soundworld of Grime, whilst also covering Sade and George Michael, without fully arriving at the original song. Populated with evasions of this type, as well as accumulated clouds of sound which skirt the edges of identifiable styles, Eshun hears in their work “moments of inspired incongruity.” The key to his review though lies in the way Eshun is able to transfer an assessment of the internal form and content of a Hype Williams record, into an account of the inappropriateness that imbued their outward facing dynamics:

What if the often remarked upon knowingness of the duo was designed to protect the right to fabricate songs that didn’t know where they were going? One reason why people love, hate and love to hate Hype Williams is that their disinterest in digital professionalism translates into a refusal to grow up and treat music as a serious profession for serious people. The duo’s attitude remains one of allusive insolence, insistent infantilism and sustained self-absorption, nurtured by an exorbitant sense of entitlement…. The heteronyms, the fake back stories, the aggravating YouTube video loops, the misleading song titles, the obstinate, obstreperous, obnoxious attitude: all of it seems to operate as a series of in-jokes designed to project a forcefield of irritation capable of deflecting the attention of anyone naive enough to enquire as to its purpose. (Eshun, 2011)

Eshun was not alone in picking up on these tendencies in Hype Williams. Marie Thompson also heard a deliberate aesthetic strategy in their use of irritation and subterfuge:

In Hype Williams, the signature noise of multiple mediums can be heard: the hazy, lo-fi effect of their recordings is mostly generated by analogue and digital media noise. Tracks are undercut by hiss, while tape warbles create distinctive pitch bends…. Many of their samples sound as if they have been ripped from YouTube videos: the audio artefacts and effects that arise with lossy digital compression….feature frequently. Just as it is impossible to tell what is fact from fiction about Hype Williams, the saturation of their music with noise makes it difficult to discern what sounds are coming from where—what is ‘live’ and what is sampled…. Hype Williams’ production style both generates and disrupts a sonic fantasy: their music sounds as if it could be played from ‘lo-fi’ media, and yet repeatedly reveals this to be an illusion–it is simultaneously too noisy and not noisy enough to be true. (Thompson, 2017)

Both Eshun and Thompson locked onto a dimension of the Hype Williams project which, at the time, went relatively unnoticed, and I would suggest, continues to determine Blunt’s work. Which is to say that in Blunt’s sound we hear the use of evasion and mystification, the generation and disruption of fantasy, to such an extent that the resulting irritation is deployed to carefully slip into the music a piercing and astute slice of honesty. It’s possible to spot the myriad ways in which Blunt has made use of this strategy once one becomes attuned to it. With Black Metal he reverses the polarities of Hype Williams by foregrounding the solo guitar and untreated vocals (as mechanisms designed to leave the artist exposed), to weave intricate songs which appear to tell the story of a breakup between a roadman and his ‘girl.’

The live show Free Jazz, performed at London’s premier avant-garde / experimental music venue Cafe Oto, was conducted in pitch darkness and interspersed with monologue poems sneering at Kim Gordon, yet it explored rather than mocked a historical monument of late twentieth century black aesthetics. XTASY (EDDIE PEAKE WET DREEM), a work secreted on YouTube sees Blunt locate a granular admixture of terror and joy spread across the surfaces of D’Angelo’s generously seductive performance for his ‘Untitled (How Does it Feel)’ video. BBF Hosted By DJ Escrow then, forms part of Blunt’s development of a mode initially conceived for Hype Williams. The album is a stand out work for Blunt, and is able to function as an ideological intervention, because the tactics of evasion combined with irritation in the service of a coded integrity, is remodelled, given a voice and given a name. With “BBF” a previously employed aesthetic strategy is transformed into a character.

Within the context of the album presented as mixtape, DJ Escrow (‘played’ by poet James Massiah) is our host. He guides the listener through proceedings and the conceit is that he is the one selecting the music. In terms of getting to grips with the direction of travel for the album, Escrow is its unexpected star, taking the focus of attention away from Blunt, who besides producing, appears at points to vocalise in his signature detached monotone that hints at heartbreak. As both host and lead character, Escrow serves as a fulcrum, one through which the ethos of the album is established, before it is eroded to open up a secondary, more complex rhythm for the whole work. Initially, we listen to Escrow as a caricature, a ludic figure designed to partly send up, partly nod to, the vocal toolkit of the pirate radio host.

In this sense, Escrow’s chatter becomes increasingly absurd because it appears to be incongruous with the dissonant abstraction of Blunt’s productions. As the album proceeds, Escrow is still there front and centre, holding court, giving shout outs, noting postcodes. And it becomes difficult to smirk at him, as his commentaries become increasingly reflective, musing on the political geography of London, the myriad modes of identification for diasporans, and the fraught sociality of the dance floor.