At Dakar’s Galerie Le Manège, the Senegalese artist shows two of his most notable photographic series together for the first time in his home city. The exhibition’s title, Saaraba, aptly evokes the idea of origins. 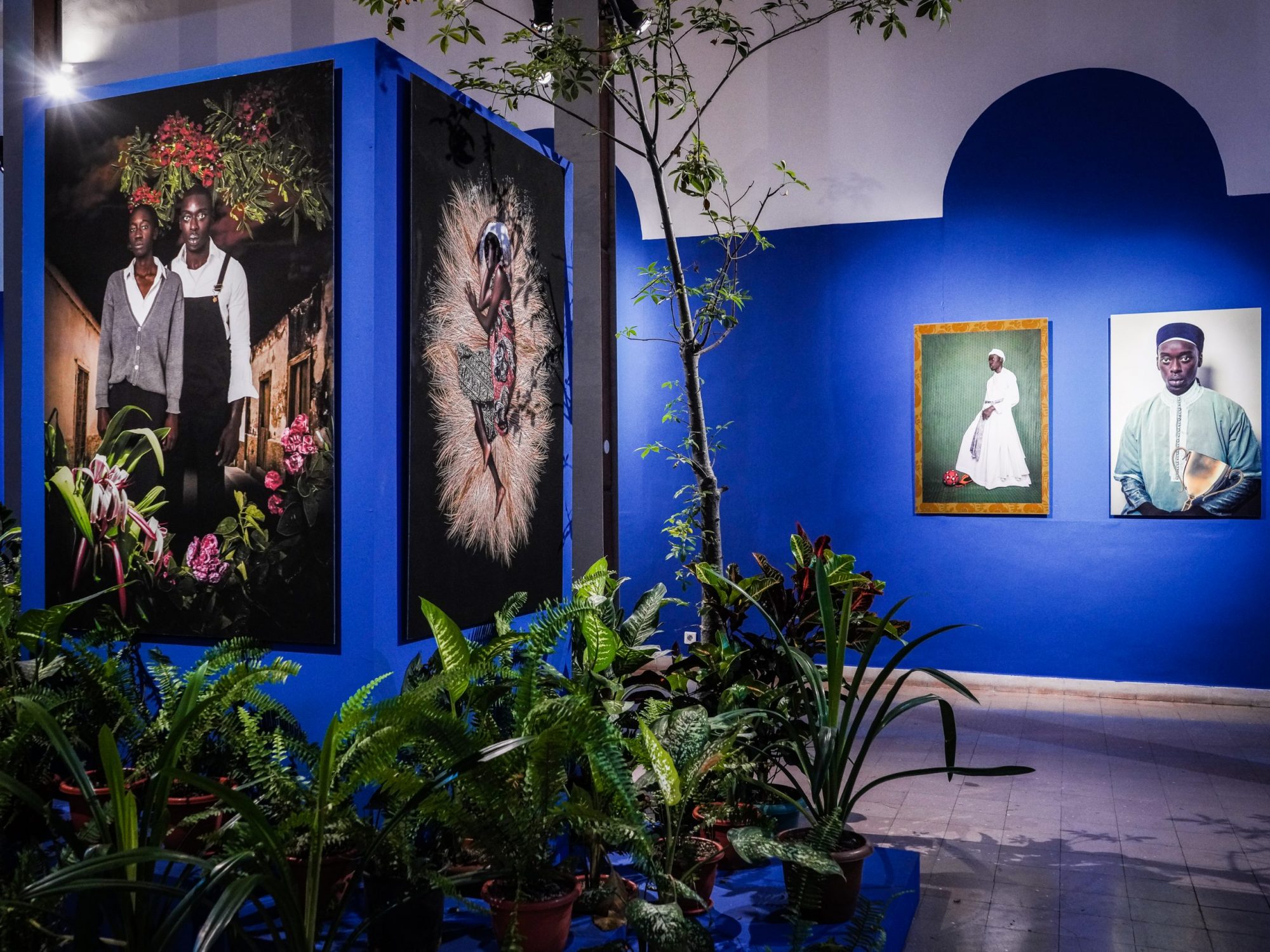 After years of international recognition and success, the two most notable series of photographs by Senegalese photographer Omar Victor Diop, Diaspora and Liberty are being exhibited in their entirety for the first time in Dakar. Diop describes Diaspora (2014) as “the memory of the Black man outside of Africa from the 15th to the 19th century” while Liberty (2016) for Diop is “a universal chronology of Black protest”.

Saaraba, a contraction of the Peulh word “Saare Baaba” can mean “the house of the father”, “the Eden”, or “the cradle”. The title of Diop’s exhibition marries these definitions by using flora native to Senegal to accompany his portraits, cultivating a bygone paradise. By painting the gallery walls in royal blue and hosting each portrait under its own arch, Saaraba recreates a pantheon for the historical figures and movements that fought for Black people’s rights and freedoms. This partly explains why Diop, speaking of Saaraba, said “This exhibit is kind of my Sistine Chapel”.

The vibrancy in Diop’s fine art photography rests on a mixture of portraiture, fashion, and visual arts. However, it is the continuity of Diop’s own image that is arresting. Apart from being the photographer, Diop takes on the double role of subject and object in both series. He uses his likeness to represent diverse figures like African American enslaved-turned-abolitionist Frederick Douglass (1818-1895) or Saint Benedict of Palermo (1526-1589), who was the first Christian of African origin to be canonized in the Roman Catholic Church in eponymous works. Diop also replicates his image to depict groups such as the civil rights activists in Selma 1965 and West African soldiers in Thiaroye 1944. When portraying the experiences of Black women in the Liberty series, such as in The Ibo Women’s War, 1929 and Nanny and Quao, Jamaica 1720, the same female model is used. By using one figure to represent stories of Black people historically and globally, Diop foregrounds a united diaspora, despite unique cultural contexts and histories.

On one end of the gallery, a world map provides a visual summary of the journey of the Black men of the Diaspora series. It shows the place of origin of the subjects of Diop’s portraits as well as their displacement. There is, for instance, Don Miguel de Castro, a Congolese emissary and diplomat who travelled to the Netherlands in 1643/4 to negotiate peace in the Congo, or Ikhlas Khan, an Afro-Indian prime minister for the Bijapur sultans of the Deccan until 1683. The short texts summarising the life of each figure raises questions about how these men slipped through the cracks of history.

These insightful passages are accompanied by the original portraits that Diop reinvented in the Diaspora series. Take Jean-Baptiste Belley (1746-1805): originally from Gorée Island, Senegal he was sold into slavery in Saint-Domingue (modern-day Haiti) but managed to buy his freedom with his savings. In 1793, during the French revolution, he became the first Black member of the French National Convention. Belley’s original portrait was painted by Anne-Louis Girodet in 1798. While Belley is painted leaning on a marble structure holding a hat in the original portrait, Diop adopts the same pose and attire but adds football equipment: a football in the crook of one arm and black football gloves and red and white flags in his other hand.

The football motif continues throughout the Diaspora series with Pedro Camejo (1790-1821) wearing goalkeeper gloves and Albert Badin (1747-1822) holding a red card and a whistle and so on. By using portraits taken by colonialists and reconstructing them with his own gaze, Diop subverts the ethnographic gaze. As the subject, object, and photographer, Diop highlights the significance of Africans telling their own story. He reclaims the skewed narrative of Africa and Africans during the colonial era by using the same oppressive tool, photography, to recast history.

The athlete has become one of the most notorious celebrity archetypes in the modern era. Particularly for Black men, athletic achievements attract esteem and admiration. This is especially true for the football player. By referencing football in the Diaspora series Diop connects to the viewers’ contemporary definition of glory and who is deserving of praise. Prince Dom Nicolau (Circa 1830-1860) for example, wears football studs and rests one foot on a football. One wonders if these ascriptions of glory and grandeur would have translated with a different sport: If Juan de Pareja (1606-1670) was cradling tennis shoes, or if The Moroccan Man (1913) carried a basketball?

The portraits of the Liberty series maintain some core themes from the Diaspora series, such as Diop’s own image and vivid colours, but differ because of their pitch-black background and the addition of flowers in and around the portraits as part of the installation. In Dakar, Liberty is displayed at the centre of the gallery with Diaspora on the surrounding walls evoking the idea of ancestors looking on to the present and future of the subjects in the middle. This arrangement highlights that these historical events and people are not isolated but can be connected through time and space.

As a representation of the fight for Black liberation globally, Liberty catalogues movements from 1700 to the present day. Ranging from slave revolts in Nanny and Quao Jamaica, 1720, emancipation marches in Selma 1965, and the Black Lives Matter movement in Trayvon Martin – 2012.  In Breakfast for Black Panther Children – 1960 Diop appears in three poses wearing a black beret, black leather jacket, and white apron underneath. Behind him, standing taller than Diop, are large, fresh sunflowers. In Dutty Boukman – 1791 Diop assumes the three poses again , wearing a straw hat with a bright red scarf and faded blue trousers, flanked by dangling pink bougainvillaea. The dark backgrounds in Liberty highlight the tense social contexts that inspire the portraits of the series. Diop seemingly emerges from the darkness, which evokes resistance and hope. However, the additional flora also undermines the darkness, as if to underline success despite the odds and the long-lasting impact of these historical moments of defiance.

Among the portraits, Aline Sitoe Diatta – 1944 stands out. Diatta was a symbol of the agricultural resistance against colonial powers in Senegal during the Second World War. France seized more than half of the crops grown in Diatta’s native region of Casamace for the war effort while imposing cultivation restrictions on traditional crops such as rice. Diatta staged effective non-violent boycotts, which lead to her imprisonment and deportation to Timbuktu, Mali where she died of ill-treatment aged 24. Diop resurrects Diatta’s image by presenting a female model lying on a bed of rice straws. Her solitary figure invokes the helplessness she suffered while incarcerated. A straw hat, sprinkled with rice and placed under her head as a pillow creates a halo effect that symbolises the religious powers her followers believed she had.

Saaraba comes together as a comprehensive, yet intimate and mediative installation on the lesser-known roots of Black history that connect the past to the present, and future of the Black experience.