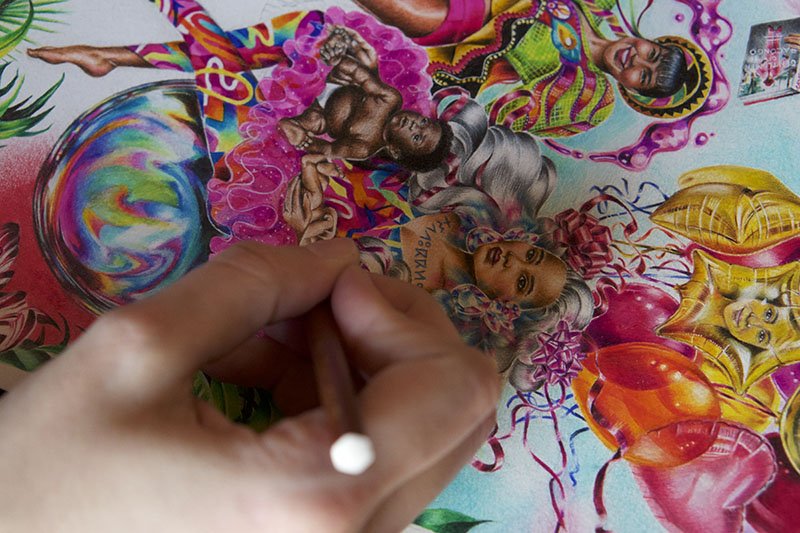 It’s late January, the weather in Milan is surprisingly warm. The Italian-Palestinian artist, Noura Tafeche, is sitting at the table surrounded by colored pencils and other tools, she’s completing a drawing full of figures which the sunlight coming through the window makes even more vivid and bright.

I can’t wait to begin our long chat: I’ve known Noura for a few years, but we’re always busy, always in a hurry, so we never have enough time to just sit down and talk about whatever we want. Finally, the opportunity has come to dig into her deep vision of art.

GRIOT: Let’s start from the beginning. What was your artistic training like?

Noura Tafeche: My love for drawing sparked when I was only three years old. At the time my family was moving into a larger flat and my parents allowed me to paint and draw on all the walls of the new house before painting them. For at least six months I had huge white walls at my disposal, and my father, who’d had this involuntarily pedagogical idea, decided to keep the drawing he liked best: a small family portrait, which he framed and hung directly on the wall.

Then, after graduating from art school, I got a degree in New Technologies for Art at the Academy of Brera, a course that taught me a lot – even if I never grabbed a pencil. I was lucky enough to have Antonio Caronia, who unfortunately passed away a few years ago, as a teacher and I discovered the profound intersection between art and technology. I also came across some interesting political visions, such as the criticism of mass communication systems, contrasting control and surveillance, and guerrilla communication. A world of games, activism, art and politics had opened up to me and I embraced it: there’s always a political message in my drawings, a thought on what happens in society.

Do you think an artist should have the freedom to take on a social and political role, or is this freedom an intrinsic characteristic of art itself?

I think it’s the artist’s sensitivity that pushes to convey a political message, but it’s not strictly necessary. As far as I am concerned, the political element is essential, partly because of the history of my family. My father is of Palestinian origin, so resistance is an inevitably recurring concept. I’ve always been very close to the word “artivism” since I started attending the AHA: Activism-Hacking-Artivism meetings, an artistic networking project conceived by Tatiana Bazzichelli at the end of 2001. The main concepts in AHA are Activism (political activism), Hacking (technological activism) and Artivism (artistic activism).

Your drawings are always so articulate and full of elements. How would you describe your work?

I don’t like definitions, I struggle to self-determine myself as an artist, sometimes even among friends. However, each of my drawings has an explanation and it’s the result of a often very long research which can be anthropological, botanical, linguistic or cultural in the broadest sense. I always worry about explaining what I have drawn, so that I can tell what is the core idea of the image.

I do it because I would like to take the drawing to another level, I would like it to become an experience similar to reading a book, which progresses in time and goes forward. We normally consider the observation of a painting or an illustration as a brief experience, but I don’t want my drawings to be considered flat things hanging on the wall or lying on a table. I want to set thoughts and connections to infinity into motion, bringing out the narrative aspect and the multidimensionality.

For example, Surveillance Kawaii is a seemingly fresh and floral drawing but, in reality, it hides a sort of fairy tale with subliminal messages about surveillance and social control. It includes a QR-code to read the story about it, I give my opinion on the subject without addressing it with the usual dark and heavy aesthetic, but hiding it behind something sweet and pretty like flowers. I often use this kind of camouflage to displace the observer and to create more interest.

Your pieces are always full of characters, who are they?

My drawings are inspired by Baroque and Renaissance frescoes. The compositional power in the works of Raffaello and his contemporaries is incredible. I take these huge frescoes, usually crowded, and miniaturize them, developing them according to the themes that I can summarise – for the sake of brevity – with the term “transculturalism”. It’s a matter of combining and merging already existing cultures – lifestyles, languages, customs, traditions, fabrics, etc. – into the design to create new languages, new cultural systems and to express concepts such as shared mutual knowledge.

I believe the view of Martinican poet Edouard Glissant is in harmony with the way I see things. He takes from the Rhizome concept by Gilles Deleuze and Félix Guattari, i.e. the ability of cultures to continue to expand and intertwine with each other, just like roots. In my drawings these relationships occur naturally, so if there is an albino person or a redheaded person, they’re not there to create a clash, but simply because they exist.

Sometimes I draw real characters. For example, in Trionfo di Bacco e Arianna there’s Boa Sr, a woman from the Andaman Islands, the last descendant of one of the oldest cultures on Earth who passed away a few years ago at the age of 85.

She was the last person able to speak “bo”, one of the ten languages ​​of the Great Andamanese. Her life story impressed me so much that I wanted to remember her including her into a drawing. The piece takes inspiration from the fresco Triumph of Bacchus and Ariadne by Annibale Carracci (Villa Farnese in Rome), I only kept the title, the composition and the concept of triumph, but I completely distorted the meanings of the figures represented.

Who are your favourite artists? What are your influences?

The Carracci brothers, Michelangelo and Caravaggio, whose works I never reproduce because they are portraits or compositions with only a few characters. I love crowded frescoes because they give me the opportunity to reinterpret in my own way the structure and composition already invented by another artist.

With regards to contemporary artists, the work of Grayson Perry really touches me, as he uses cross-dressing, ceramics and tapestries as means of expression. But I’m also very influenced by film directors and musicians, people like David Lynch or Björk have succeeded in creating amazing new worlds and dimensions. And I attach great importance to dreams, to my dreams, and to human relationships.

Is art the tool of your anthropological research?

Occasionally, it’s anthropological research, other times it’s linguistic or botanical research. I deeply study the topics that I’m interested in and I find the amount of things humanity has managed to invent incredible, from alphabets to fabric dyeing techniques, from folklore and customs to cuisines. Each culture has something to say and has fundamental values but, above all, it’s in continuous relation with the other cultures.

The real constant with your work is the technique: paper and pastels.

Yes, I always use these tools because they allow me to convey the fragility of my work. I love drawing with pastels also because of the tactile experience and the position I’m forced to assume: bent, with my neck down.

I’ve also printed on fabric, because I liked the idea of ​​carrying a drawing around with all its history, on a fiber that doesn’t deteriorate like paper. Fabrics carry meaning all over the world, from wax print in some African cultures, to the Dream Weavers of the T’Boli culture in the Philippines, who weave their dreams on the T’nalak fabric. In the Palestinian culture, fabric embroidery is an important mean of resistance too.

Do you think art can play a role in the Palestinian question?

On February 5th, your first solo exhibition Ramè will open its doors at Colibrì Caffè letterario in Milan. What can you tell us about it?

The exhibition consists of my production from 2014 up until now, about twenty pieces on the theme of transculturalism that I enclosed in the title Ramè. In Balinese it means “joyous chaos” and it indicates the Balinese approach towards life and other people, an emotional transport so intense and alive to become almost asphyxiating. One might think that I’m showing a small number of drawings, but I spend a lot of time researching and drawing, so the realization of a piece can take up to a year. Moreover, it’s mainly miniatures, so I have to constantly sharpen the pastels.

Check out Noura Tafeche’s exhibition ‘Ramè’ at the Colibrì Caffé Letterario in Milan (via Laghetto 9/11). Her drawings will be on display until March 17th.