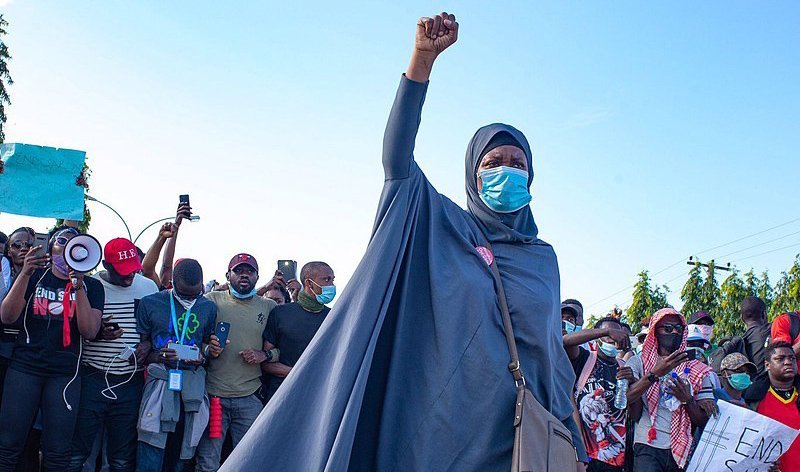 Police violence is a major socio-political issue plaguing numerous societies. Not only in the Western world, but in many African countries, where several protests have taken place. In Nigeria as well as in the UK and in the US, Nigerian youth has marched on the streets since 2017 to protest against the brutality perpetrated by the Special Anti-Robbery Squad, commonly known as SARS. Facing a growing discontent from a population who has been denouncing the SARS’ horrendous exactions for a long time, on 11th October 2020 president Muhammadu Buhari has resolved to disband the controversial police unit “with immediate effect.”

PRESIDENTIAL DIRECTIVE: The Special Anti-Robbery Squad (SARS) of the Nigeria Police Force @PoliceNG has been dissolved WITH IMMEDIATE EFFECT.

The Inspector General of Police will communicate further developments in this regard.

Abduction, extortion, murder, rape, torture and mock execution are among the accusations against SARS that have surfaced since 2014. Created in 1992, SARS originally aimed at tackling the rise of violent criminality in Nigeria. Unfortunately, they progressively turned into a dangerous and manipulative repressive force, behaving as if it was above the law. Acting with total impunity, and without any consideration for human rights according to Amnesty International, the federal police unit fuelled the anger and bitterness of a young Nigerian generation, who decided to use social media to show the world the harmful influence of the SARS in their country. As reported by Amnesty International, 82 cases of police brutality were documented in Nigeria between 2017 and 2020.

Over and over again, the Nigerian federal government has promised to reform SARS. On 14th August 2018, vice-president Yemi Osinbajo even ordered the urgent reform of SARS after realising how wide-spread the controversial conduct of the federal police unit was. Furthermore, in December 2017 the Nigerian government adopted a law which criminalised torture in the country. But, despite their many promises, it was only recently that President Muhammadu Buhari decided to listen to his people’s claims, by finally dissolving SARS. Yet, rather than convicting the rogue officers in a Nigerian Court, it was decided instead that they would be redeployed to other units. Inspector General of Police Muhammed Adamu even added that a “new policing arrangement” would be implemented to replace the unit as soon as possible.

For some demonstrators, the disbandment of the SARS marks the beginning of a true police reform in Nigeria. However, when looking at the nationwide protests, it seems obvious that the Nigerian Government does not understand the depth of the wound caused by SARS to the population. The demonstrations which took place in the country were violently repressed. Although the right to demonstrate is enshrined in Nigerian law, protests are often brutally shut down by the authorities which pretend to preserve order and stability. Many protesters posted videos on social media showing officers firing live ammunition, but also using tear gas and water cannons at young demonstrators. According to The Guardian, a female protestor said “she saw a group of six officers beating a woman with batons and sticks.” Many demonstrators reported injuries and protestor Jimoh Isiaka was shot dead by police in Oyo, while a police officer from the Southern state of Delta was killed while carrying out his duties.

According to Osai Ojigo, the director of Amnesty International in Nigeria, “the announcement falls short of demands for accountability and justice for abuses committed by the unit and the police in general. […] The police authority must state strongly which concrete steps they will take to ensure all officers alleged to have committed human rights violation are investigated and brought to justice.”

Conscious that the dissolution of SARS is not enough, protestors vowed to keep fighting until the government brings the SARS officers to court, but also for the end of police brutality in Nigeria in every shape and form.

On October 20, 2020, hundreds of protesters in Lagos were shot as rallies against police brutality continued in defiance of a 24-hour curfew imposed hours earlier by the government. Witnesses say Nigerian forces opened fire on protesters, and Amnesty International said it had “received credible but disturbing evidence of excessive use of force occasioning deaths of protesters at Lekki tollgate”. The force se