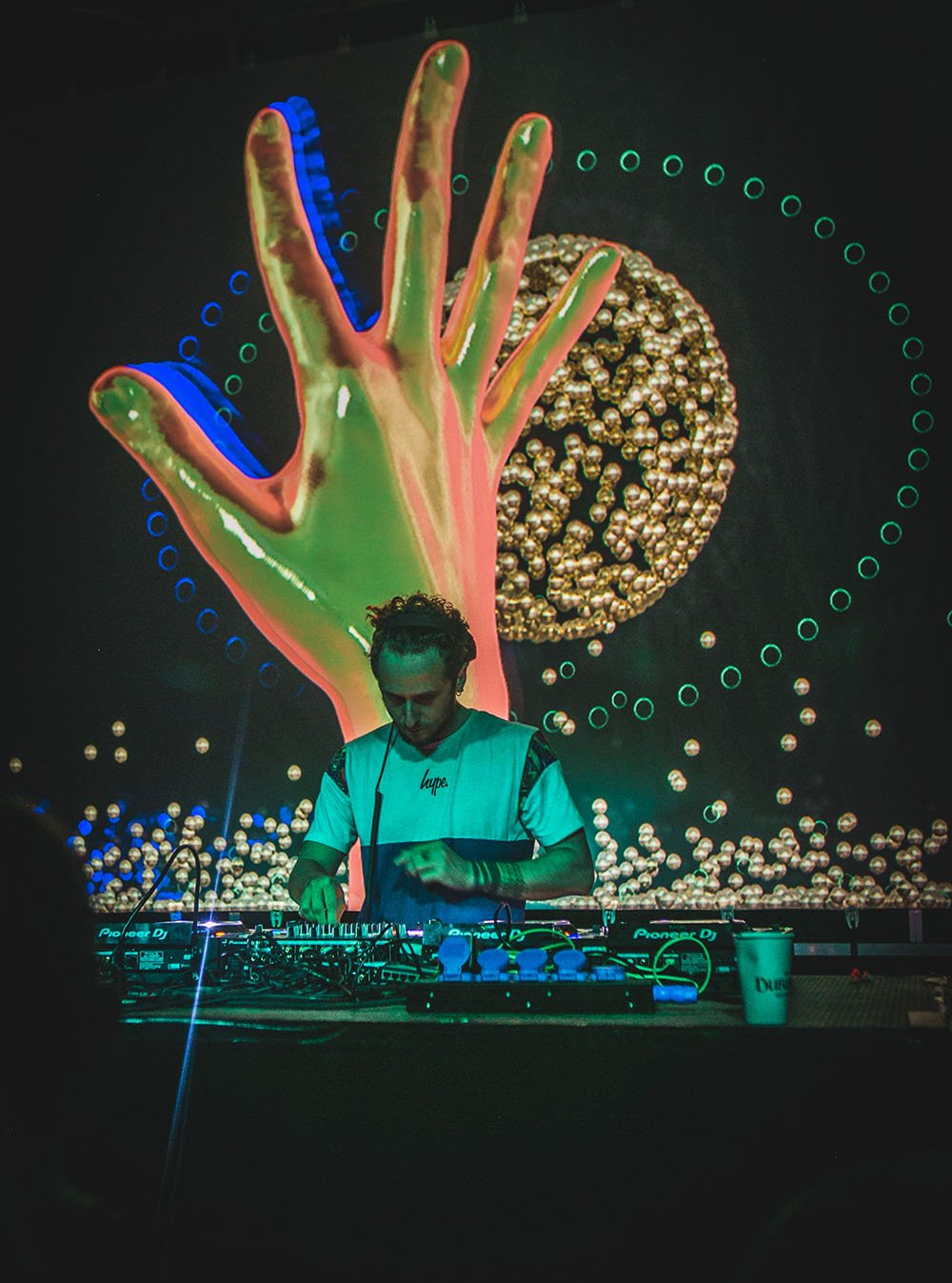 It’s Friday night, it is absolutely freezing, but the cold won’t kill the hype as I head towards North London. The Originators EP has finally come out, and I can’t wait to venture into a long chat with Italian DJ and producer Francesco “Malumz” Cucchi, aka Nan Kolé.

Most people will know him as the head of Gqom Oh!, one of the labels that most contributed in spreading the distinctive South African genre in Europe. However, his artistic journey began much earlier and unfolded in a completely different cultural background.

Rome, 1993. Francesco is thirteen years old and -like many kids his age- he’s massively into hip hop. After visiting his father who was in Los Angeles for work, his passion grew even stronger and as gift for passing his secondary school exams, he got his first turntables.

“Basically, I started messing around with those. My father definitely left an imprint because he’s always been into black music. Prior to hip hop, he had got me into Jimi Hendrix, into the afro hair myth, even my aunts adored him,” he told us. “Then in 1995 I started going to raves and that’s when I started to feel the need to produce. My family has always supported me and when I was eighteen they got me GrooveBox (Roland MC-505), so I started producing with that.” At that time the music scene in Rome was radically split between hard-techno and hip hop, but not afraid to swim against the tide, Nan Kolé used to produce both. “I had some friends in a hip hop crew [Flaminio Mafia], they used to occasionally come round to make beats and freestyle, but I would go to raves too. I was an outsider in those years, in both one scene and the other. Then, in 2001 I made my first techno record, it was some crazy 180BPM stuff, but that was my first real music production experience.”

Along his path, Nan Kolé met many people who contributed to his artistic growth, especially Riccardo Petitti and Andrea Lai, two DJs whose nights at Brancaleone brought the underground UK sound of the early 2000s to Rome. “They used to play jungle , drum’n’bass, breakbeat. I went to so many nights with all the leading artists, from the most infamous, Goldie, to all the others. Petitti and Lai guided me and taught me about club culture, as well as giving me technical training. I did a one-year course with them and with DJ Stile who taught me how to scratch,” he revealed.

Then in 2007-2008 dubstep came along and UK funky followed, an event that made Kolé approach afro-influenced sounds. On Petitti’s proposal, he started a dubstep night and at the same time he met his ex-partner Karima, who was a house vocalist and an MC at the radio station M2O.

Shortly after Pepe Soup was born, an afro-influenced electronic music band inspired by Uk funky. “It was a beautiful journey, she was rediscovering her roots – because she was born in Rome but has Liberian origins – and her dad gave us lots of Liberian music cassettes from the 70s and 80s. We listened to so much stuff, it was an incredibly inspiring period of my life.”

Together they founded Soupu Music, a label whose concept recalled food and spices. “We released Hagan, Lorenzo_BITW and many others, then we started looking at South Africa because south african house was really cool back then. We had four or five south African artists—from Port Elizabeth, Cape Town and Johannesburg—and this was one of the events that made me discover gqom music through all the contacts and Facebook connections.”

Careless of those who had advised him against it, Cucchi eventually decided to move to London after a period of personal life changes and seeing the enthusiasm in the roman scene diminish more and more. “Discovering gqom was a breath of fresh air for me. In Rome venues were closing, the approach had changed and I was still in my comfort zone. Moving to London was a leap in the dark and it was not easy at all. First of all, I didn’t understand a word of English,” he confessed giggling. “On top of that, I had to work in restaurants for a few months, but this new life style gave me so much energy. Also, when I arrived in London there was already a lot of hype around the Gqom Oh! project, which was something I hadn’t quite realized in Rome.” Unsurprisingly, just a month after the release, the compilation Gqom Oh! The Sound of Durban sold out and the rise of the label began. The Originators EP is the label’s latest release and it represents ‘the past, the present and the future of Gqom—the thunderous club sound from Durban’ with nine unreleased tracks and four exclusive digital bonus tracks showcasing the pioneering artists who contributed to the creation and evolution of gqom.

“I am very proud and happy because putting this record together was a very difficult, long journey. I did it to give gqom a sort of cultural reference at a time of radical changes in the Durban scene. As a label that aims at representing the sound of Durban, it was very important for me to bring together the artists who have contributed so much to the evolution of the genre. I worked on this release for over a year and I had to do a lot of research because the origin of gqom is a very controversial matter.”

In fact, in the fragmented South African socio-cultural context, many producers have disappeared or no longer make music, others don’t trust you and in some cases it’s impossible to determine the authenticity of the tracks, Nan Kolé explained. However, his three trips to Durban were key to shed light on these complex aspects.

“During my last trip I dug very deep and I managed to connect the dots. The Durban scene is huge and the idea of ​​The Originators was born when Citizen Boy managed to get in touch with Griffit Vigo, a legendary producer who nobody knew nothing about. Every time I went through samples with the boys in Durban, it was all Griffit Vigo and Sbucardo’s, so I felt really lucky to be able to finally spend time with him.”

Griffit, an extremely creative and humble artist, took him through the history of the Durban sound over the years with anecdotes and, especially, music. “I couldn’t believe it! He had this hard drive full of very old stuff and only then I finally managed to understand the evolution of the scene in Durban. He told me about when him and DJ Lag heard Naked Boys’ broken beats for the first time, they all went crazy and they started to make broken beats too—even though Griffit already used to produce and had a group called Hopeless Sound. He’s a very quirky character, he listens to Beethoven and Nina Simone, I’ve never seen such an artistic approach in all the studio sessions I’ve done in Durban,” Kolé revealed.

However, there are plenty of artists that he wanted to include in the EP and that – in their own way – helped to make the history and innovate gqom. “For example, Rude Boyz were the first to introduce the famous tom roll and make it viral, but then everyone started doing it, it became like a sort of competition. Apparently Sbucardo was one of the best at making tom rolls, for this reason I wanted to include his tracks in the album. Then, there’s Umshanelo (meaning broom, to sweep) that was introduced by Griffit Vigo alongside chopped vocals. I am very proud and grateful to have these artists, it was very important for me.”

Following Gqom Oh!’s tradition, the EP comes with a powerful 3D graphic displaying the iconic symbols of Durban and gqom culture, Kolé explained. “I wanted to represent the geographical and cultural context even more: the lion represents the power of music and the strength of these artists – because they all have an incredible energy; the stadium is very important, all the big events in Durban take place there; there’s the palm tree, taxis and finally the fire, because all the tracks are bangers.” Beside the label, Nan Kolé also works on his solo project. Last year Bayefal came out on Black Acre and many more projects are currently in progress. “At the moment I’m trying to find my sound, it will clearly be influenced by what I’ve done in the past two years, but I’m trying to be very careful not to take too much influence. Actually I’m trying to bring techno back in my productions, because I like it and it’s a bit of a throwback, let’s say. I also made several collaborations, a track with Hagan, one with Citizen Boy, one with Dominowe, when everything is ready we’ll see where and how to put it out”.

You can listen to The Originators and find more info on Gqom Oh! here.