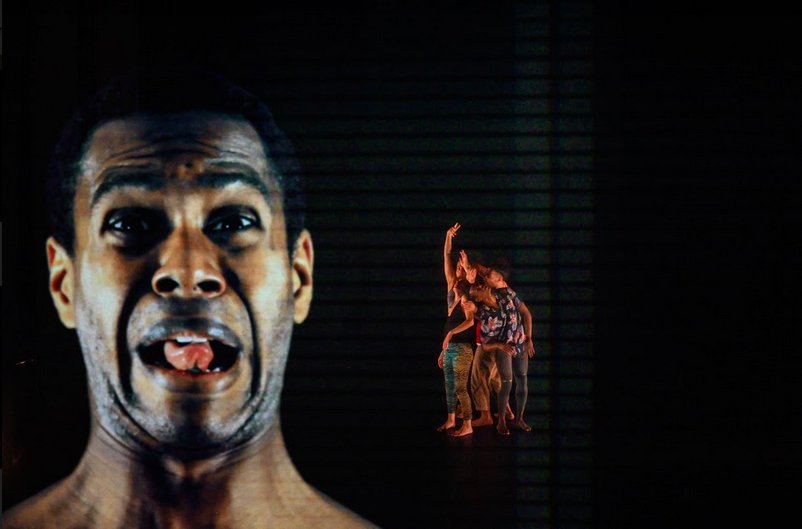 Last October, on the occasion of the ‘Italy-Africa’ Conference in Rome and the private visit of 250 guests to the African Metropolis exhibition at MAXXI museum, we presented a teaser of Mirrors. Six months later, it became a larger and more complex project, a multidisciplinary performance in which dance, music and video installations weave a dialogue which connects Italy and Africa.

The show will circulate in 3 African cities: Addis Ababa on 28th May at the Italian Cultural Institute; Johannesburg on 2nd June at the UJ Arts & Culture Theatre; Dakar on 8th June at the National Theatre Daniel Sorano.

On 22nd May a small audience was able to get a taste of the show in an open-rehearsal session in Rome.

Mirrors is punctuated by four narrative chapters: Birth, Discovery, Origin, Contamination. Each of these moments offers heterogeneous landscapes, both visually and musically, upon which different identities inhabit the original disorientation and discover inner aspirations and a sense of belonging that gradually develops thanks to the unique contributions of the young performers.

The young performers: Afro-Italian ballet dancer of Brazilian origin, Roberto Lazzari, Italian-Nigerian dancer and African-Caribbean dance specialist Ofelya Omoyele Balogun, Italian-Tunisian dancer and electro-dance, hip-hop and bone-breaking specialist Andrea Bouothmane, and the Italian choreographer and performer Irene Russolillo embody the spirit of Mirrors, which is amplified by the presence of ten additional performers on stage at each site.

“Looking in a mirror (an object or a person) means recognizing yourself in an image that goes beyond your body, but that is your body at the same time. It’s an image that speaks and listens, that seems to move away to then come back, that seeks and finds its own space in a continuous dialogue that oscillates between chaos and stillness in search of balance,” says Johanne Affricot, the artistic director of Mirrors.

Echoes and references to Italian and African music traditions feature in the original soundtrack created by the London-based Italian-Ivorian producer EHUA. From the Sicilian mouth harp and ancestral songs of Salento folklore in which guttural sounds and vocal noises recall percussive elements, to the grafting of talking drums and djembes and the
reinterpretation of electronic genres such as South African gqom, these sonic elements evoke, exalt and crystallise fragments of traditions, cultures and ideas that are part of Italy and Africa.

The video installation by the Italian artist and theater director Luca Brinchi, sees the human at its center, reverberating in different forms in order to amplify and support the aesthetics of the dramaturgy and the choreography.

Developed by roman lighting designer Daniele Davino, the light design includes technical experimentation, rarefied atmospheres, geometry and spatial dynamics mediated by luminous elements to produce a lively and sometimes futuristic environment that enhances the storytelling and the intensity of the performance.

The show, held in Italian, is subtitled in 5 languages: Amharic, Wolof, English, French.

Partnership with the local dance companies

GRIOT and the Italian Cultural Institutes of Addis Ababa, Pretoria and Dakar are also collaborating with resident dance companies such as the Destino Dance Company (Addis Ababa), UJ Arts and Culture and Moving Into Dance Mopathong company (Johannesburg) and the company at the Theatre National Daniel Sorano (Dakar) to integrate other movements of their dancers within the show.

All the dancers and students will participate to a workshop led by choreographer Irene Russolillo.

The tour will culminate in a documentary that will be directed by Jeffrey Alex Attoh to premiere in Italy in Autumn 2019.

Mirrors is developed and produced by GRIOT and the cultural association LIT in partnership with and with the support of the Italian Ministry of Foreign Affairs and the International Cooperation and the Italian Cultural Institutes of Addis Ababa (Ethiopia), Pretoria (South Africa) and Dakar (Senegal) for the 2019 “Italia, Culture, Africa” (Italy, Cultures, Africa) integrated promotion programme, promoted by the Italian Ministry of Foreign Affairs.