Meshell Ndegeocello | “Mainstream Thinking Isn’t Relevant Anymore. If You Have An Opportunity, Take It.” 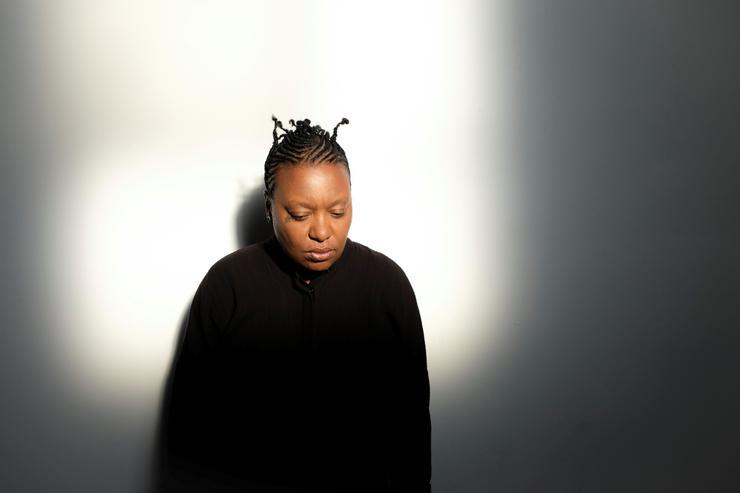 When mentioned among musicians, Meshell Ndegeocello’s name always sparks a certain sense of respect nearing devotion. Heads nod in approval and the conversation becomes a succession of examples and reasons why no one could or should say that name in vain.

Being the first queer woman to appear on the cover of Bass Player Magazine, the bassist, songwriter, political activist, composer and ten-time Grammy nominee, Meshell Ndegeocello is credited with the conception of the neo-soul movement. From Tony Allen, Chaka Khan and Madonna, to the Rolling Stones, Billy Preston and Alanis Morissette (just to name a few), she has worked and collaborated with the Olympians of the international music scene and toured the world with her albums. A pillar of the R&B and neo-soul scene, her contribution is fundamental in the evolution of the most distinctive and influential genres in contemporary music.

Talent, dedication, commitment, radical thinking and the ability to adapt to a world in constant evolution have led Meshell Ndegeocello to build an alternative path and to create new narratives, perspectives and lines of thought. In recent years, in addition to composing various soundtracks including the score of Ava DuVernay’s acclaimed series for Oprah Winfrey’s network Queen Sugar, she has been working on a project that sees writer James Baldwin at its center. Ndegeocello created Chapter & Verse: The Gospel of James Baldwin, inspired by The Fire Next Time, and consists of a helpline through which people can discover songs, meditations and chants “to relax the mind at any time, day and night, when you need it most,” essentially “a kit of 21st-century ritual tools for justice. A call for revolution. A gift in turbulent times.”

As if her political commitment and musical genius were not enough, Ndegeocello has also gotten into screenwriting. She recently scored Ahead of The Curve, a documentary shedding light on the history of one of the most influential lesbian printed publications in the 90s, and she collaborated on a new single with Robert Glasper and H.E.R, Better Than I Ever Imagined.

We linked up with Meshell for a phone conversation on the occasion of her participation in the recent Vancouver International Film Festival to discuss current projects; share ideas about the new delicate world order as well as the historical moment we are living through.

GRIOT: You scored the soundtrack for Ava DuVernay’s drama series, Queen Sugar, which includes songs from your earliest albums, like Bitter (1999), as well as later ones such as Weather (2011). What were the most exciting aspects of working on the music for this series? How did you work with Duvernay to create the perfect balance for this score?

Meshell Ndegeocello: It was actually a great experience, almost too comfortable, because it was my first time doing an actual entire score. For most of my career I only did one song in a particular scene or ending credits. So, this was super intense, but I was very lucky because the director genuinely liked my sound. Once we got the flow of each other and figured out the instrumentation and the character study and the feeling of each person, it became just like an easy conversation between her and my team. By the second season we had a nice flow where it just became—I was hoping—an extension of the show, something that you didn’t notice, but that you would miss if it was gone.

Recently you also scored the documentary “Ahead of the Curve” which sheds light on the early 90’s lesbian community and its visibility and representation through the story of the foundation of Curve magazine. What are the sounds and genres that were fundamental for you to include? Why?

Well, that became more about a period to recapture. Scoring that was about how I can recreate a certain feeling of nostalgia. That’s a different sort of gig and also what I call “emulating” or “making a simulacra of songs” where you’re borrowing textures and sounds of a period that you want to make your own. That was exciting for me, but it was also more difficult because they were far away. We’d have to communicate through emails and I find that difficult to do a score. Music is so subjective, you know, and that’s also literally just to try to intuit it.

For years I have had a little piece of paper on my wall, saying “I’m not a pessimist because I’m alive”. It’s a quote by James Baldwin that I wrote down to keep above my desk because, actually, I’m a bit of a pessimist, so it’s like a little mantra I try to repeat myself everyday. Being a Black Italian is still such a paradox, we live in a double standard in which we constantly have to almost justify our existence, our experience. Then I bumped into your website and I saw Chapter & Verse: The Gospel of James Baldwin and I want to know more about it. What pushed you to launch it?

That’s very interesting cause one of my favourite Baldwin’s books is Another Country and the complexity of the Italian-American character is the one that sticks with me all the time. When I play in Italy its an interesting experience, it always feels different than when I’m in other parts of the world. Wow, I can imagine.

I guess, Chapter and Verse is my attempt to try to free ourselves from this culturalism and bigotry by using The Fire Next Time as a manifesto of any of his writing; just using them to give people a different perspective. He’s very clear and concise with his language: no labels, no slogans, “no party can set you free”—you know—there’s no religion, no flag more than a human being. And as a person of colour that was born here in the US, he made it clear to me that I’m a “kidnapped pagan”. I wanna create a different narrative for myself, it is a selfish endeavour, I try to create this inheritance for myself and one of the ways is to make James Baldwin my orisha, someone else to look up to as my guiding moral compass and to also re-educate myself and rethink the canon, rethink the basis of civilisation. And it’s great content with itself—you know—Western civilization, content that with its position in society is beginning to be questioned and I guess I’m just trying to create ritual and information to participate in the narrative.

Young artists today feel a lot of insecurity related to the opportunities that manifest for our community and the sense of tokenisation that comes with them, especially after the killing of George Floyd. And if this is a feeling that sparks positivity and hopefulness for the future and for the inclusivity of the cultural system,  it also fuels impostor syndrome in young artists; it makes them feel taken advantage of, a tool for society’s conscience cleansing.  If so, how did you overcome them? What is your advice to young artists who find themselves navigating the complex worlds of music, art and entertainment in this slightly more “woke” but still tricky cultural frame?

Of course I do. I’ve experienced meetings where I was told this could be my time. “You’re female and you’re of colour, so you’re trendy now”. But I don’t know, personally I think there are so many blood vessels to the heart of it all and I don’t think mainstream thinking is relevant anymore and if you have an opportunity, you take it. , because at the end it’s what you make out of it. You still have to do the work, even if it is affirmative action in some way which you know people have a problem with, you still have to show up and do the work. They cannot take the work and the dedication from you, they cannot take the effort and the intention from you and that’s all you’re really responsible for. Their reasons are not your concern. But as far as being of colour, this struggle has been going on for over a thousand years, so I guess I just don’t concern myself with others’ intentions, I’m trying to take opportunities and to be as clear and as prepared as possible and you should do the same. Not to be dogmatic, but take those opportunities.

I’ve had the pleasure to watch your online conversation with Hayley Kiyoko and Brandi Carlile on music, identity and activism. You mention the fact that other than music, you have been looking at other media such as writing movies and scripts to narrate different stories. Is that something we can all get excited about?

I hope so! I mean I’m trying, I’m sharing some screenwriting books. I just struggle with the visual medium, it is so powerful, so I just want to be careful with what I make. But it is something I have such an interest in, and I really enjoy editing and doing things. If you go online, there’s this animation that I scored for the Baldwin project and I made some other little snippets of things. It’s just a natural evolution of the musician at this time, because if you do want to put out music, you have to have a very strong visual game, more so than in the nineties when the videos were important. It’s just a way to communicate, so that’s why I find myself interested in it.

You have changed your name a few times. According to your Wikipedia page, Ndegeocello references the phrase “free like a bird” in Kiswahili. What were the reasons behind this important choice?

At that time, when I was 17-18, I was in search of my identity and I was very queer – as Baldwin puts it: a kidnapped pagan. I was owned by someone named Johnson, I also had my struggles with my parents and I want it to separate from that in any way. So, I think that’s what happened, I didn’t change it when I got a career. I just always wanted to be not born with that name, so I changed it. I think at the end I’ll be like Elon Musk’s child, I’ll have a number for a name. I don’t really have an attachment to that part of myself. I’m always fascinated by that idea of “make a name for yourself”, it doesn’t matter what the work is if you make a name for yourself, you know?

This year marked American history permanently for a number of reasons and November is very close. What are your feelings and thoughts leading up to this new pivotal moment?

I think it’s very important to maintain your sense of self, maintain a peace of mind, it’s just very important not to be sucked into the news, not give in to your despair. Some days I wake up and I’m just like: it’s funny, it’s always been like this. The world is a complicated place, it feels more and more like theatre. Maybe I have more of a hindu idea where they see the world as drama, something we are acting out more so than a ceramic sort of god blowing life into people. We’re just in this intense drama that plays out and they’ll be more — trust me — and worse things, and there will also be beautiful things. There’s much… you know.