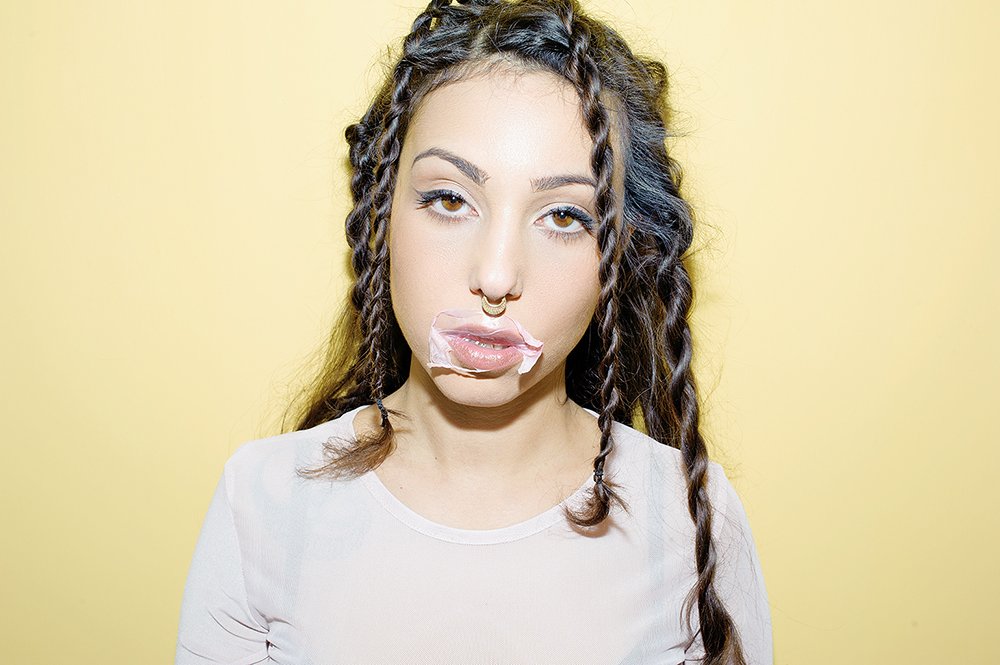 Black music in her sound, the Mediterranean sea in her blood, the Sahara desert in her eyes. LNDFK is the new voice of Italian future soul.

Her debut EP Lust Blue was released on Feelin’ Music in November 2016 and it’s just the tip of an iceberg yet to be discovered. Shaped by the sound of jazz, black music, trip hop, street culture and contemporary art, Linda Feki’s artistic journey rises from the desert and evolves in western metropolis, combining tradition and modernity.

Next Friday LNDFK will headline at Rooty, the festival exploring contemporary electronic music and the sounds of our roots, so we got in touch for a chat! GRIOT: The first time I heard your music, I thought you weren’t Italian. And it’s quite rare to hear music made by Italians that sounds international. What can you tell us about your background? And who was Linda Feki before the debut EP?

LNDFK: I was born in Sousse, Tunisia, my father is Arabic and my mom is from Naples, Italy. I’ve always been in love with jazz and black music. So I started gigging around with various bands like you normally do.
A few years ago I got into the Bristol sound, I love trip hop, and then I started researching and listening to Brazilian music, especially jazz.

That’s how I started the jazz school where I met Daryobass, the producer I work with. At that time I was learning how to play the piano and he had already started producing. He was looking for a singer, I was looking for a producer and eventually we started working together.

Is Daryobass the only producer you collaborate with?

I’m the face of the project but we have two formats for the shows, we either play as a duo or a trio depending on the context. We are jazz musicians at the end of the day, so we don’t like to play with backing tracks. It’s nice to capture the energy of the live, though we get really bored at the idea of ​​doing the same thing at every show. So I play the synths, the bass and I sing. When we play as a trio we try to create an even more live atmosphere, with various sounds, acoustic and electronic drums, synths and so on.

In your bio on Bandcamp you say that leaving your native country helped fuel the desire to reconnect with your roots through music. What do you mean?

I left Tunisia when I was one and a half and I only went back once when I was 8 or 9. It was so emotional.. I remember the warm sand on my hands, an incredible feeling… I need to go back because I feel a strong sense of belonging to Africa and its rhythms and also because of my father’s Berber origins.

When I was a child I saw a picture of my great-grandmother in which she wears her hair in braids and has a tattoo on her face. It really fascinated me and made me feel so proud. That’s how I’ve chosen my look and the cover of Lust Blue – where there is also a reference to Rothko and expressionism – because I love Rothko .

Which I believe is also the concept behind the amazing teaser for the EP. It’s super. How did you make it? And what was the message you were trying to launch?

The idea was to represent the union between tradition and modernity. The traditional image of the desert, that moves quickly to the rhythm of Catch your Breath, and the square, which is the symbol of the EP and covers my eyes, the only visible part of the body. I wanted to create a consistency between my sound and how I see things. I’m also going to release a new video I made for the song Souleyes, it will be a tribute to the photographer Richard Kern.

My ultimate goal is not just to make songs, but to communicate feelings, smells, sensations. For example Catch your Breath doesn’t have any lyrics, because I wanted to convey the feeling of being out of breath, creating a 360° type of communication.

You are half Italian half Tunisian, you lived in Paris and New York, you sing in English but you release on Feelin’ Music, a Swiss label! I find it very amusing!

Yes, crazy, right? The truth is that I love writing in Italian, I write much better than in English. But I tend to write in Italian for other people, because I don’t know how sing it. Unfortunately, because of the rhythm and phonetic structure of black music it doesn’t sound right. Of course there are exceptions, Ainé, for instance, has an acoustic neo soul project that sounds really cool. Though I believe it’s very difficult to mix Italian with this kind of music without ending up sounding cheesy. Neapolitan is much more musical, it’s perfect to write lyrics with! It’s a very annoying not being able to sing my own language… Do you know anyone who does this stuff in Italian?

See what I mean!?

New York, Paris, now you’re back in Naples. What’s the next step?

The idea was to move to Rome because we were looking for a nice place with a good vibe in Italy to produce the new album, but we also want the opportunity to go to jazz nights to keep us stimulated even though we don’t play jazz anymore.

I think it’s important for a musician to travel and explore different music scenes and environments. In New York, I literally lived on jazz, it’s like a sort of music theme park! When you walk in the streets of Brooklyn you really feel the musicality of the place, or you go to Central Park and suddenly you understand Coltrane… beautiful.

Paris is also wonderful. I initially went there in search of a masters, but I didn’t find what I was looking for because there were mainly jazz conservatories and didn’t want to go back to work on horn arrangements all day long. Then bookings and gigs started so we went back to Italy, but I’d love to go back because Paris is a dream city.

What about the new album?

I’ve got a few things in mind but I can’t say anything at the moment. The idea is to do a lot of collaborations. The sound is going to be similar but more mature, because the EP came out last year, but we had been working on it for a while. Then we discovered new influences …

Speaking of influences … I read that you’d like to be like Nai Palm and Hiatus Kaiyote. Stupid question, but I’ll ask anyway. Why? And what are your other inspirations?

She is amazing. I hear so many things in her sound, Lauryn Hill and lots of other stuff. She is an alien and the thing I admire most is her freedom. Then Taylor MC Ferrin, Rahel – who has collaborated with Eric Lau, Youssef Kaamal, all the Thundercat scene and then the new entry – which I’ve been listening every single day since the release – Telephone by No Name.

What about Italian stuff?

See, at first I was worried about the reaction of the Italian audience, because there isn’t a real future soul scene in Italy. There are lots of beat makers, as there are a lot of people making electronic stuff or jazz, but no one does exactly what I do. I must say I was pleasantly surprised with the enthusiasm I receive, because I didn’t expect it.

The thing I notice is that in Italy all the different scenes  don’t communicate like in other parts of the world, and they are kind of snobbish with each other. Instead, why not combine these realities? I grew up in the city centre, while Dario is from the suburbs in the north Naples where there’s a huge street culture. It’s a reality which I never encountered when I was growing up. Now I realize how my sound has been contaminated by these influences, because when I met Dario I would go to his place and people would start turning up with MPC and whatnot. It ‘a really rich and interesting scene.

You can see LNDFK live Friday 31st March at BUH (Florence, IT) for the third event of the festival Rooty. Before the concert, do not miss the talk on 2G artists in Italy with LNDFK, Marcello Farno (Bizarre Love Triangles) and Andrea Mi, curator of the festival. Event info here.

– Friday, April 28, talk “JapanAfrica” ​​Andrea Mi in conversation with Masaaki Yoshida and Maurizio Busia on the reinterpretation of African tradition in the Japanese electronic scene.