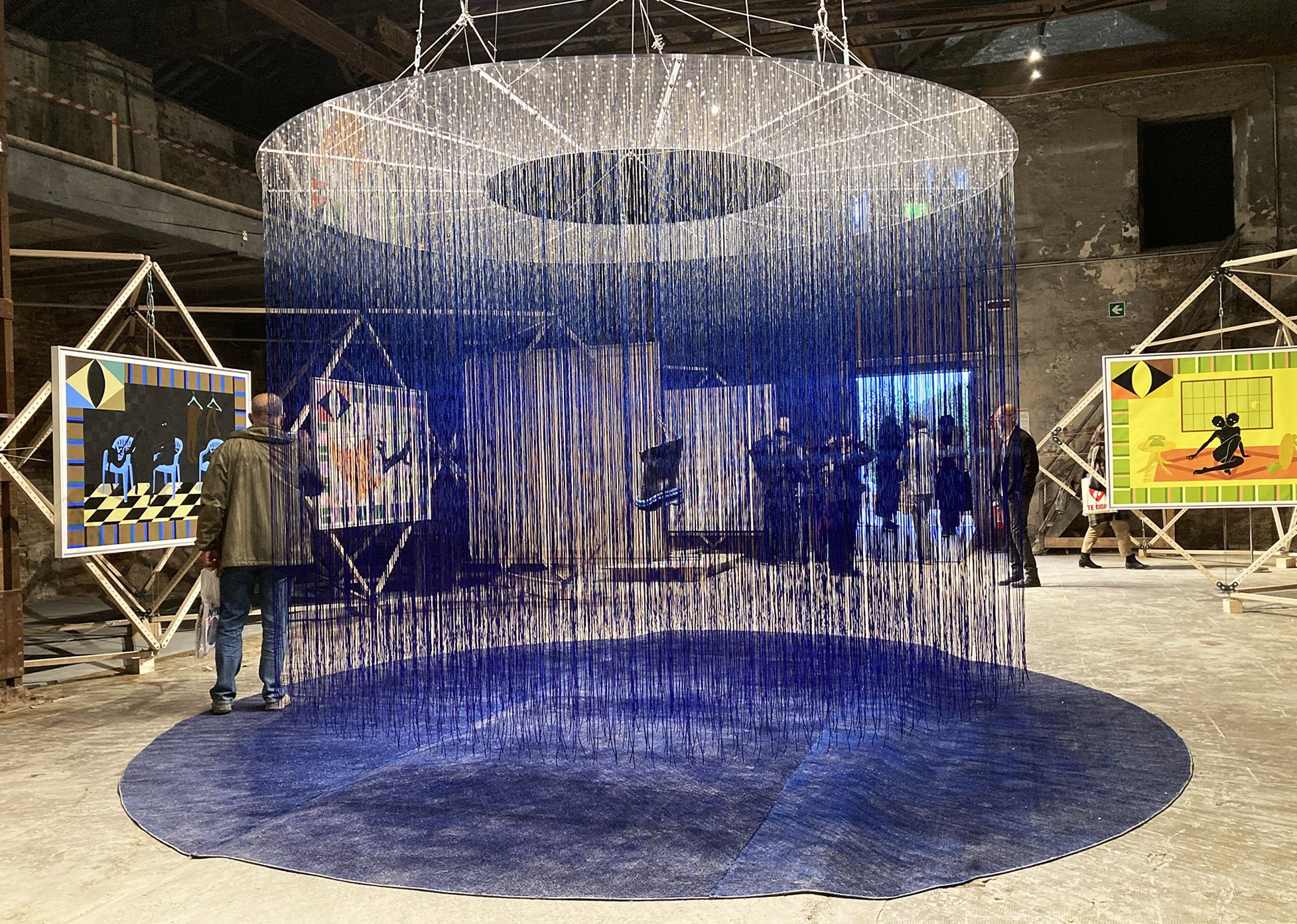 A woman sits on a pink carpet that runs through a grove of leafless red trunks, looking into the dark mirror of a bright yellow dressing table and running a red comb through her hair. Her eyes, which can only be seen as mediated through the mirror, glow through the darkness. In another painting, the figure is sitting on one of three blue chairs arranged in a row, taking off a black sequin jumpsuit loosely hanging in one of the chairs. To her left, an anthropomorphic brown suit evoking legs and arms is draped on two hangers.

“This series is part of a larger project I’ve been working on for about three years,” Reindorf tells me in front of a painting with a woman lying semi-prone on a pink cloud, fluttering in a pastel green-colored sky towards an open door, seemingly carried by the fans printed on a sheet attached to a clothesline behind her. These figures are three members of Mawu Nyonu (roughly translated as ‘god-woman’), an imaginary secret society of seven women envisioned by the artist. The Mawu Nyonu  are believed to have formed as a direct result of the 19th century disbandment of the Dahomey Amazons, an all-female military regiment active in what is now present day Benin.

Reindorf’s examination of freedom at the Biennale is arranged in a mixed media installation positioned at the centre of the pavilion flanked by seven paintings that are arranged in a semi-circle around it. The arrangement draws from the costume-tradition and performative practice of masquerade.

Practiced in various African countries and believed to be a predominantly male activity, masquerade has been a dual-gendered ritual system for long time: “I have been interested in West African masquerade for quite a while. Through my extensive research I discovered that the majority of them are male-led, but a few are female. I then thought that it would be interesting to use the idea of storytelling, which is very common in Africa—especially in Ghana—to create my own story, my own mythology, an entire world around which I could make works specifically for.”

In this mythology, Reindorf uses the stereotypically negative aspects affecting women as a way for them to escape through the art of masquerade. Although each of the women might seem to be the same character initially—the public is confronted with a black silhouette of woman’s body drawn with a thin pale line, the face filled only with white eyes—the artist uses the background color as a visual lexicon to help the audience understand and identify the essence of each woman, and the stories behind  each of them. The group of women is not a one-off storytelling device, rather, Reindorf reiterates that these women will continue to be the main characters of her work over the course of the next decade.

A recurring visual feature of the series is the abstract eye, which appears alongside elements of the regimental flags of Ghana’s Fante people that are influenced by proverbs and heraldry, known as Asafo Flags. Whether it is positioned at the top left corner of each painting or as a feature inside the painting itself— in the shape of the mirror, the balustrade, the back of the chairs, etc—it symbolizes the gaze, especially with masquerades. “This idea that you can see or you cannot. You don’t know who’s behind the costume, her identity, but the person who is in their own mask can see who you are, she’s always looking back at the audience,” Reindorf said. “But it’s also the male gaze on women.”

The male gaze is a social dynamic that the artist further explores through a large installation, made up of a cylindrical cascade of blue strings that partly conceals and protects the torso of a woman wearing two waist beads at its center.

“The choice to focus on the torso was deliberate, because the torso is where beads sit. This work is connected to the blue character in that painting. I used beads as a connection to fertility and sexuality. This character is based on the idea of a woman who is able to control and has access to her body and her sexuality, keeping the audience away to reach her,” she concludes.