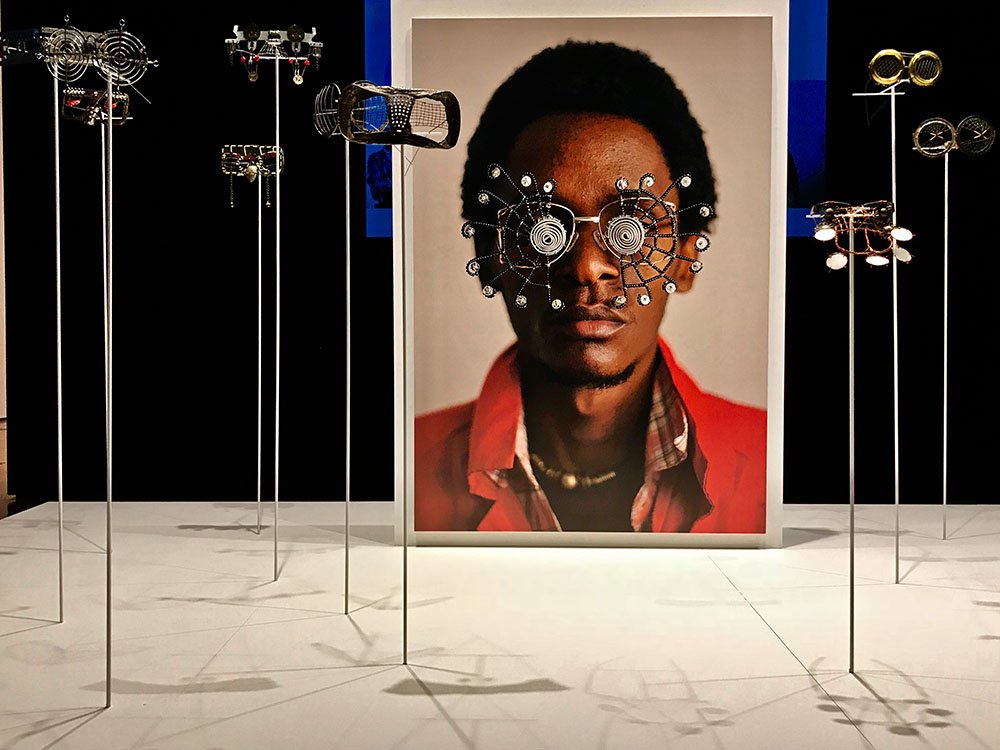 The Making Africa- A Continent of Contemporary Design exhibition, which opened in October 2017 and closed this month at the High Museum in Atlanta, was initially shown two years ago at the Vitra Museum in Weil, Germany. The inaugural exhibition might have attracted mostly connoisseurs of design, seeing as Weil (ask anyone in Nairobi, or Berlin for that matter) is not exactly conveniently located. Even so, the 2017 version in midtown Atlanta is still a (transatlantic) leap of faith: after stops in Bilbao, Barcelona & Rotterdam, “Making Africa” is showing in the US for the first time.

The exhibition opens with three questions, which are encountered upon arriving in the first section of the exhibition, entitled “Prologue”. What is design? What is Africa? and What is African design? Cyrus Kabiru surrounded by a swarm of his C-stunners, gazes at the visitor while they contemplate on that perennial “elephant in the room” that resides in most museums: the western preconception of Africa.

Art historians will note that the museum has often produced the very images of Africa which it now, in a strange twist, seeks to deconstruct. The solemn contemplation on these weighty issues occurs against the backdrop of Chinua Achebe’s words: “Until the lions have their own historians, tales of the hunt will always glorify the hunters”, and a plethora of video interviews with Koyo Kuoyoh, Ekuwi Enwezor and other household names in African Art and design.

The second part, “I and We“, examines how design can be a tool to engage with each other, and thus portray dynamisms and identity formations that would otherwise be lost. Fanon’s quote “In the world through which I travel, I am endlessly creating myself” headlines this section. Images from the The Studio of the Vanities series by Dakar-based Omar Victor Diop and by legends J.D. Okhai Ojeikere of Nigeria and Malick Sidibè of Mali are on display, alongside the first pidgin musical in the world Coz of Moni, starring the hyper-satirical Ghanaian duo FOKN Boys.

Correspondingly, the exhibition also focuses on a budding generation of artists such as Zimbabwean illustrator Sindiso Nyoni of My Africa is… and Kudzanai Chiurai who address global audiences directly in a very interdisciplinary way, shattering clichés about ‘African’ cultural production in the process. Most of these creatives break the rules of contemporary design and assert their expertise in their own specific contexts by challenging sweeping generalisations of what anything/one that is “African” is supposed to be like.

The third part, “Space and Object”, looks at the individual and their immediate environment. Cities and technological developments are a major theme here. Teju Cole, whose writing has appraised the cities of New York and Lagos in the most beautiful ways, provides the quote that serves as the headline here. It reads “The strange familiar environment of this city is dense with story. The narratives fly at me from all directions”. While this holds true for many cities, it holds especially true for many African cities. As such, work exploring Informal urbanisation and the mobile phone boom which were trending topics in 2015, is on display.

This is how Kenya’s revolutionary and ubiquitous mobile money transfer service M-Pesa finds its way into the institution that is the Museum. However, two years down the line, Mobile Money seems to be on the verge of becoming a(nother) single story. This is especially so because in 2017 the so-called Silicon Savanah, a budding tech-ecosystem in and around Nairobi, was all the hype and just like elsewhere in the world, people in Africa (like Jepchumba, Selly Raby Kané and the Nest Collective) are thinking about the role of virtual reality and technology in the visualization of African utopias. The fourth and final part, “Origin and Future”, explores contemporary African culture, its past and its future, through objects. Here, the slightly decontextualized words of the former Ghanaian president Kwame Nkurumah are a guiding principle “We face neither East nor West, We face forward”. Waxprint Prison by Ghanaian-German Zohra Opoku is on show, exploring the textile dilemma of African wax print through images. El Antsui’s Nane, made of waste bottle tops that the Ghanaian artist avidly collects, is also on display, and is rumoured to go for a seven digit sum. Looking towards the future, this section also portrays visions, such as Olalekan Jeyfous “Lagos 2081 A.D” a series of images produced for Walé Oyédijé’s male fashion label, Ikire Jones. Such visions find a suitable outlet in design, where utopias become images and things, a palpable reality that can be touched, seen or – in this case – worn.

Two years since its premiere, the exhibition has lost little of its ingenious sublimity, even though newer dynamism was not reflected. Going forward, this slope will get more slippery. For instance, some of the designers who were ‘experimental’ in 2015 have since “arrived”: Selly Raby Kane’s fashion shows are now a fixture on both the art & fashion calendars. The Senegalese designer has since opened a concept store, been the first external creative director of Design Indaba, and has landed a “pancontinental” gig with Ikea to work on its 2019 furniture collection, which will be designed entirely by african designers. Meanwhile, Vogue spotted Beyoncé wearing two pieces from Kane’s Dakar City of Birds collection in a single outfit. It will be useful to flesh these developments out a little more in future editions.

With Making Africa – A Continent of Contemporary Design, the High Museum set out to shed new light on contemporary African design. Showcasing 200 pieces by more than 120 artists from 25 African countries, the installation illustrated how design bears witness to economic and political change on the continent. The next stops for the Installation are Albuquerque (NM) (Feb– May 2018) Austin (TX) (Oct ‘18 – Jan ’19). Apparently, more stops are in the works, and the newly opened (and controversial) Zeitz MOCAA in Cape Town is probably being considered for an African debut of the installation. It is my hope that the exhibition will show in the African Cities that inspired it as much as it has elsewhere. Eventually, those “naming rights” will have to be earned.