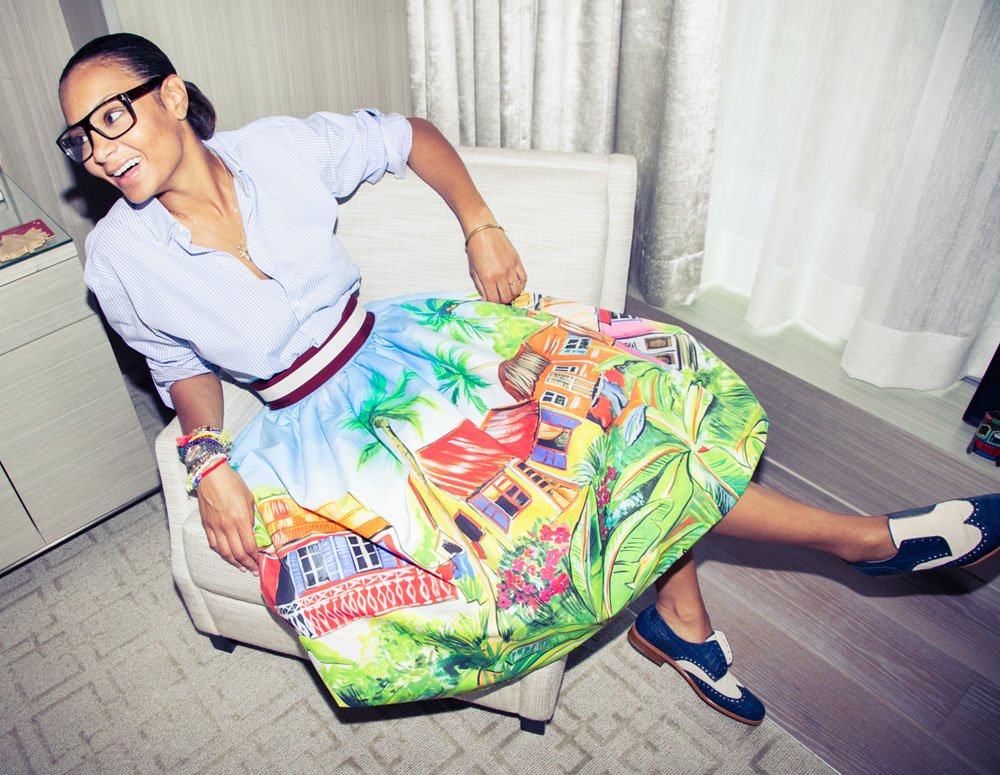 I ring the bell. The housekeeper opens the door and brings me to see Stella, who welcomes me to her beautiful house with her two splendid children. It’s a muggy, humid Saturday.

We take a seat on the terrace. There’s a great looking barbeque – the big, super modern kind. One of those that makes you feel like a serial griller with the power to feed 20, 30 people, all without sending them home smelling of charcoal and smoke.

Like the excellent hostess she is, Stella offers me a cold drink and invites me to stay for the lunch she had already organized. We sit on the wicker sofas and I start my interview, clearing the air, I say “Stella, this is not a real fashion interview, but just an informal chat among friends”.

“Sure. Also because if you were to ask me what colors I thought of for next season or the like, I would have no idea how to answer you,” she reassures me.

But let’s take a step back in order to more deeply understand Stella Jean’s talent – young Italian Haitian designer, adored and worn by stars, national and international artists, personally chosen by Giorgio Armani who asked her to present her SS 2014 collection at his traditional show space, the Armani Teatro, and find out why each collection, while maintaining a distinctive trait, is never repetitive nor predictable.

Who did you inherit your artistic side from?
My home has always had an air of creativity about it. My Haitian mother’s very refined tastes, a student at the Academy of Dramatic Arts, an excellent decorator, had a strong impression on me. My Italian father, from Turin, a jewelry designer, lover of hand-made clothes so much so that I always accompanied him to his tailor’s when he wanted to have clothes made.

When was your first experience in fashion?
I spent my teenage years surrounded by family friends from the fashion world, such as von Fusternberg. Thanks to them I started to model. But I wasn’t satisfied only modeling. I found the moments spent in the show room much more interesting, when they try the clothes on you.

You’re practically surrounded by an army of seamstresses that appear to be Knights Templar engaged in some kind of ceremony punctuated by terms and movements that lead to the creation of a garment.

I decided to leave the runways and from there began my creative process. At the beginning I aimed only at creating nice things, of Italian craftsmanship, and painting on fabric – so much so that I still work with Nadia Valli, a 87 year-old woman who in the past exhibited in prestigious museums in Paris, and with only one hand realizes all the painted images that you see on my clothes – she lost mobility on one side of her body due to a stroke.

With this philosophy I participated twice in the Alta Roma-Vogue Italia scouting project “Who is on Next” without achieving the result I was hoping for. In 2011, however, came the turning point. On the advice of Simonetta Gianfelici, the talent scout, who told me “try to be more sincere, show your uniqueness, put your stamp on it”, I got rid of everything I had done up to that point and began to visually and culturally express what was most unique about me: my double Italian Haitian identity through the collection Wax and Stripes. That’s how I won the competition. Talking about wax, last year some African bloggers wrote that Western and African American women should not wear African clothes, arguing that African culture can not be reduced to simple clothes or costumes – suggesting it was a form of wearing a “mask”- and that large chains that use them do nothing but feed the appropriation of African identity. What do you think about this?
I have to premise. I have no aesthetic ambitions, in the sense that my goal is not simply to create beautiful things. We have very large chains that offer collections every day, every week. There is now this bulimic relationship with fashion so we don’t need someone else to [just make] beautiful clothes.

When I started it was on instinct, a personal need. Fashion for me is primarily a means of communication. I communicate. I used it more as therapy, as a way of relating to others. And Italians are the first people I address.

Despite being born here in Italy, a Haitian mom, a dad from Turin, brought up in a comfortable environment, I attended Italian and French schools , etc. – today, at age 36, I find I’m still asked “Where are you from?” and I respond “I’m Italian.” “No, ok, come on, where are you really from?” “I’m Italian.”

So I started to combine my father’s striped shirts – to show my Italian side – with printed wax – the fabric that’s almost like the flag of an entire continent and symbol of Haiti’s roots – which at the time I thought was fabric of African origin.

I began to study it, analyze its codes, the cultural side and in the end, to my surprise, I discovered that while it’s true that it is a fabric linked to Africa, it’s merely a Dutch production.

The cloth was first produced in Java; Dutch soldiers took it to Europe, where it however was not a hit, and so they distributed it solely to the African market. It’s a business worth 800 million euros per year.

The “wax” is a way to recount Haiti’s African roots, the first colony to gain independence from the French in 1804. How connected do you feel to the country?
Very. When it comes up I tell people that I’m half Haitian and they respond “oh poor thing, I’m sorry,” I say, “don’t worry. Haiti has a lot to teach us.” I don’t hide the fact that there are pockets of poverty and misery across the country, but in cultural, artistic and literary terms Haiti has a large influence in the Caribbean that no other country has – except Cuba.

The only art movement of the Caribbean, recognized and emulated internationally, is the art naif, which in fact was born in Haiti.

Just think that one of the most important ministers of French culture, André Malraux, had studied this art a great deal, declaring that the island, from an artistic point of view, was the most magical place he had ever been. It is a enormous recognition, but if we don’t talk about these things they’ll never be known. I bombard everyone about this, so much so that my partner has forgotten about Italy.

And then one thing that distinguishes the Haitians, regardless of their social background, is the class, the way they dress. They care a lot about dressing well. For them it is a matter of respect. I admire them a lot for this.

Now we have to work so people stop believing that Haiti is the extension of a slum. July 10 is Haiti’s day at the Expo in Milan. Recently I was in the country with the Ethical Fashion Initiative to meet some local artisans with whom I want to create special accessories. In my latest collections, also swimwear, there is a lot of La Perle des Antilles.

If you had not become a designer what would you have done?
I would have been a diplomat. I would do the same job I’m doing in the fashion world just on a different level. Stella Jean was one of the panelist of Afro Italians in The Arts Today, a round table developed by GRIOT for the American Academy in Rome.

The conversation considered the accomplishments of four Italian creatives – Stella Jean, Fred Kuwornu, Wintana Rezene and Antonio Dikele Distefano – in various fields, assessing at the same time their status in an Italy transformed by immigration.