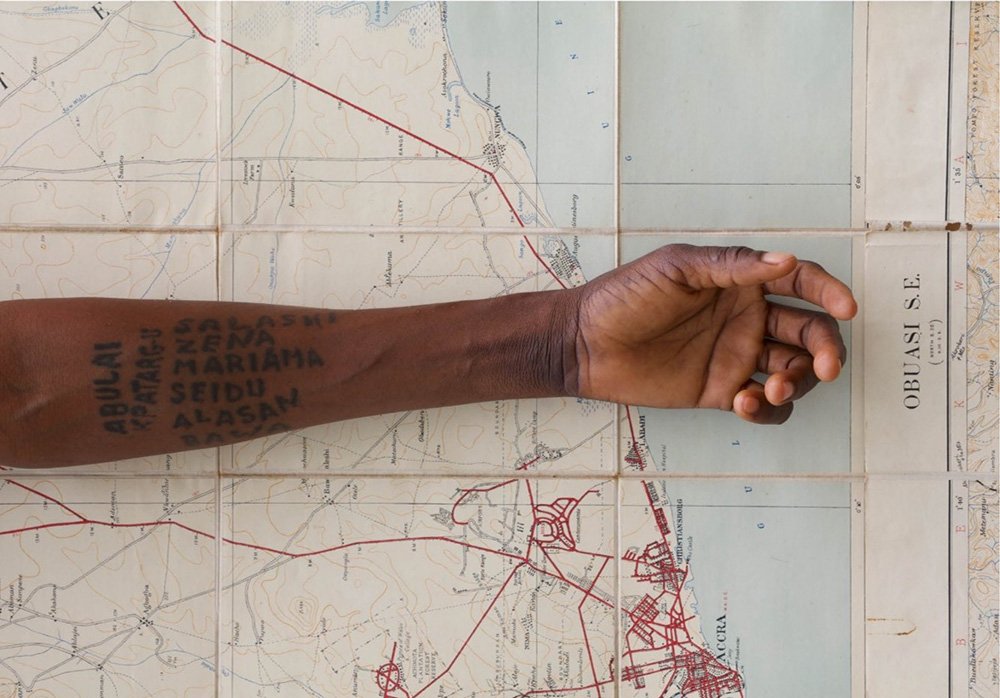 Embedded within the specific cultural and socio-political history of Ghana, the work of internationally acclaimed artist Ibrahim Mahama addresses issues of globalisation, labour, the exchange of materials and community building, ultimately bringing to the fore a more universal social condition. Mahama is well known for his wrapping of architectural structures with jute sacks. His last Italian monumental installation for the Fondazione Trussardi, A friend, specially conceived for the two neoclassical tollgates of Porta Venezia, reflected on the very concept of the threshold—that place of passage defining inside and outside; one’s self and the other; the friend and the enemy.

Originally made in Southeast Asia and imported to Ghana to transport cocoa beans, jute sack seventually become multi-functional objects reused both by local goods sellers, and for various needs in the home. Both material and commodity trajectory–with its textured skin that retains the imprint of its own history– exemplify the crux of Mahama’s practice: the investigation of the memories and decay of history, cultural fragments, the discarding and future transformation of objects gathered from the urban environment. Through his examination of the history of these objects, Mahama underlies how their evolution over time denotes the developments and changes in contemporary society.

For the exhibition at Fondazione Giuliani, Mahama worked over a long period of time with a network of collaborators, or collecting communities, to gather nearly two hundred disused sewing machines, which he has now transformed into the large-scale installation, Capital Corpses 1 (2014-2019). These machines, so intrinsically associated with the fashion and textile industry, embody a political context in which the industry, and any discussion thereof, completely ignores any taking stock of the decay of objects.

The installation also explores sound, an important yet often overlooked component to objects, and acts as a kind of linkage, or echo, of the two films in the exhibition. The two-channel film, Parliament of Ghosts (2014-2019), shows workers in Accra’s Agbogbloshie market, the largest waste site in the world, repetitively remodelling the tin, wood and steel objects left behind by progress. The voiceover to this grim labour comes from 1950s Ghanaian parliamentary debates in which the urgency of unleashing the skills and potential of the nation’s youth is emphasised with an irony that sounds pointedly possible as well as tragic. The virtual reality film, Promises of hanging living men have no dead weight (2014-2019), creates a further echo, as it transports the viewer into the inner workings and machinations of decaying buildings, abandoned silos, and other architectural scenes.

Maps of the Gold Coast (1898-2019) consist of a grouping of defunct maps from the 1920s to 50s. Produced during Ghana’s colonial past, the maps present traces of surveys executed while the English built the country’s railway system (now mostly defunct) to transport goods and minerals, upon which Mahama has drawn minimal interventions. These are accompanied by a series of photographs that depict the inner forearms of women who have travelled from villages close to where Mahama grew up in Northern Ghana to find work as labourers in the capital city of Accra. The women tattoo their arms with their names and the contact details of their next of kin, in case they should be killed or injured in the innumerable road accidents or on building sites. This crisis, Mahama believes, is an opening to starting a new conversation regarding the condition of the body in the 21st century and beyond.

Ibrahim Mahama was born in 1987 in Tamale, Ghana; he lives and works in Accra, Kumasi and Tamale. In March 2019, Mahama founded an artist-run exhibition space, research site and artists’ residency, The Savannah Centre for Contemporary Art (SCCA), in Tamale, Ghana. As an extension of his artistic practice, the intention of the artist is to invest in one’s community while forwarding the development and expansion of the contemporary art scene in Ghana.