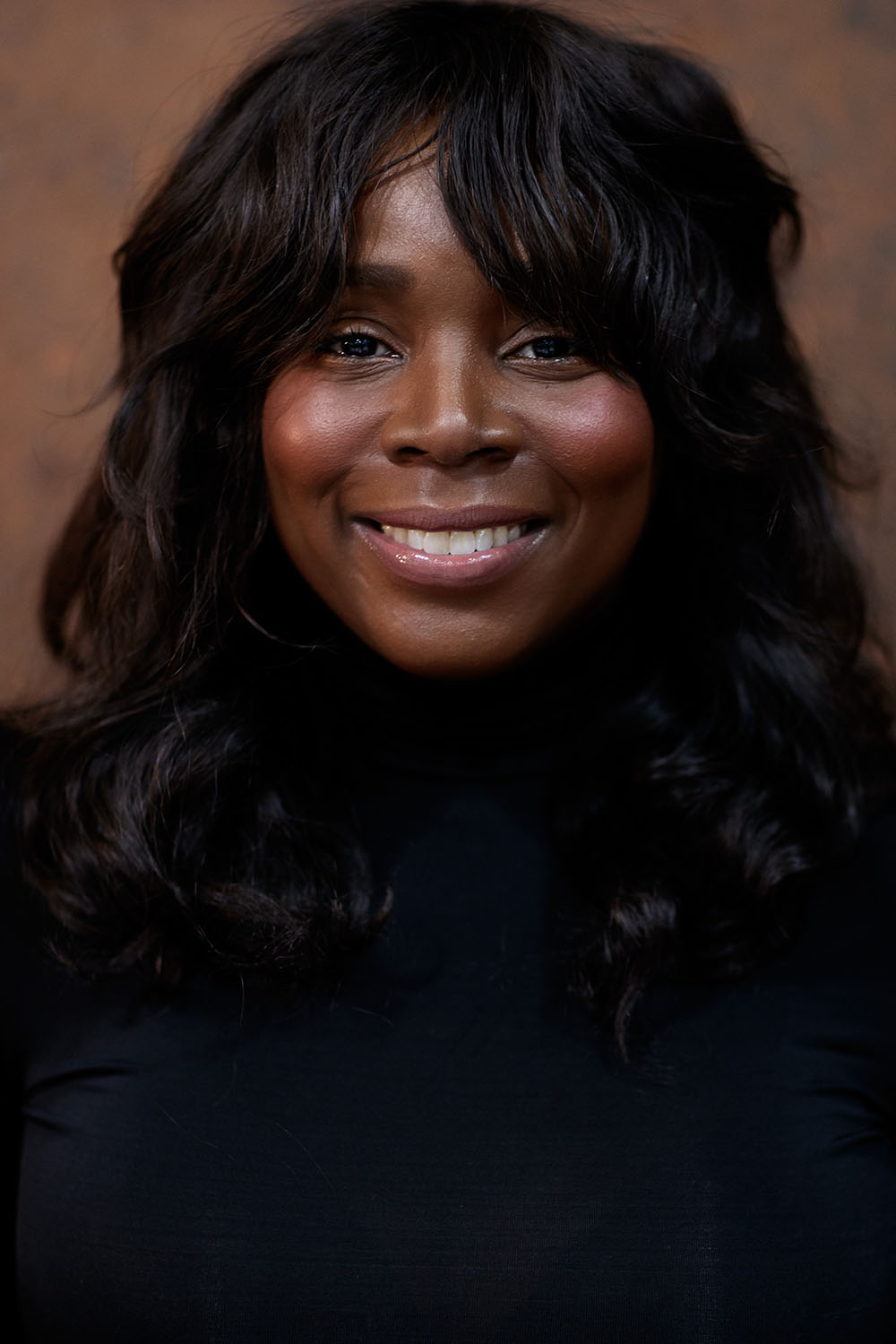 37 years old Brooklyn resident Sharifa Murdock, partner at Liberty Fairs with Sam Ben-Avraham, is one of those inspiring people you should get to know.

I’ve been following her work for the past few years, and she just blows me away with her flawless confidence and style that cannot leave anyone indifferent. So when I got the chance to meet with her during Pitti Uomo 91 in Florence, we discussed the importance of Mentorship, the challenges of being a young gifted black woman working in men’s fashion industry, Black Lives Matter and what Sharifa Says to enthusiastic and aspiring fashion gurus.

GRIOT: You’re a partner at Liberty Fairs, founder of the Brooklyn Intern, you just released the 2017 agenda “Set the Tone Sharifa Says.” I’m a huge fan of ‘Sharifa says’ quotes by the way, you seems to be almost living on a plane, and I can go on and on… So as a multi-tasker and a very busy woman, how do you manage to be everywhere and do everything?

Sharifa Murdock: I try to stay on schedule you know, and have a sort of balance. I mean I try to do everything, but I’m not always everywhere and doing all all the time but I’m always trying to make it easier, I don’t want to put too much pressure on myself and I have a very good assistant [she giggles] so it’s not that hard.

And I assume that managing things the way you do requires a lot of discipline.

How did you end up in the menswear industry?

[she smiles] I started into it actually… So my partner Sam, [founder of Liberty Fairs, owner of Atrium stores and original founder of PROJECT Trade Show] had a store called Atrium, and I worked in the store since I was 16 years old, and Atrium was a big deal back in the day.

It was amazing, it was one of the first contemporary store selling premium denim and it was the dream store to work at, I mean you worked at Atrium and it felt like you were at Gucci. That’s the level, seriously! It was amazing!

What happened was, I went away after college and I worked at a few stores like Louis Vuitton and all these other places. And then, of course, we had a joke, an ongoing joke, it said that “Anyone who works in Atrium once, works there twice.”

I was the store manager for about three weeks, and then he comes to me and says, “Listen I have a new project that I’m working on, I’m gonna call it PROJECT, it’s a trade show, a fashion trade show.” And, that’s how I ended up doing it.

Honestly, I was 23 years old, I had no idea of what I was doing and he took a chance on me and I’m very grateful for that. Because I wouldn’t be where I’m at today if it wasn’t for him.

But you also studied fashion right?

I studied Fashion Merchandising and Buying. Back then that’s all they had, you were either going to be a designer or a buyer. And basically those are the two things I studied, and I only went to school for three years. I got an associate degree, and by then PROJECT took over the world and, you know, that’s how it ended it up!

So the most important thing wasn’t really what you studied but how Sam believed in you back then?

Yes, 100%! He believed in me, and, I mean it’s funny, I never stop learning! Every time I think I’m done with something he says, “No, you have something else to learn from this!”. He’s so smart, he teaches me something new every and he trusted me with something so big! You know, I don’t know who else would do that…

It makes sense to me now, because a few days ago I read an interview where you were talking about the importance of a mentor. So your reflections come from having been mentored yourself by Sam Ben-Avraham from the age of 16. But what about you? You became the successful and stylish hard-working woman you are and I know that you started The Brooklyn Intern in 2005 with the goal of mentoring and placing Brooklyn High School students in six-month internships in the fashion industry.

Yeah! Because I think it’s important if you start to mentoring when they’re young. You can basically mold a young student into what you need them to be. If you can catch them at a certain age where they’re willing to listen and to be humble, you can mold them into anything.

How does it feel to be someone’s mentor? What is your responsibility as a mentor?

It’s just guidance! It’s just about guiding them in the right direction, helping them and understand them, teaching them how to articulate themselves and seek the way they need to find. It’s a process, it’s an ongoing situation. I’ve had mentorees that I mentored  years ago, but they’re still calling me, “Hey, how should I do this, how should I do that…” It’s important to just continuously being supportive to someone. “Liberty is freedom, it’s space without boundaries,” so we can read on your website, but what does that mean? What makes Liberty Fairs different to any other fashion fair? Tell me the story.

It’s a discovery. Basically Liberty is freedom, it means that you’re free to do whatever you want both as a designer and as a person in the fashion industry. You are a creative. And we believe you’re free to do whatever you want to do creatively. We don’t care if you might not be cool or if you’re not on point with what’s going on, we want to see the best that you can be. That’s what we’re willing to accept. Take a moment and understand it, because we believe in you as a person.

The ongoing project Born in the USA launched in 2015 at Pitti Uomo 87 is the main reason of your frequent trips to Italy. Could you tell me more about this collaboration? How did it start?

Basically, Pitti told us they came to one of our first Liberty’s shows, they saw what we were doing and they loved it, so they thought it would be amazing to have some American brands in their shows and do a collaboration. So they asked us to come and bring American brands over to Pitti, in Florence. This is how Born in The USA started and we’re now at the 5th edition. You’ve been coming to Italy about twice a year actually, tell me what your Italy is?

What’s my Italy? I’m honestly gonna say my Italy is Pitti and Pasta. Pitti and Pasta [she chuckles]  because I don’t get to see much while I’m at Pitti, but I get to eat some really good Pasta and I get to see amazing shows at Pitti.

You kind of have a leading position in the menswear industry, how does it feel to be a successful woman in a man’s world?

It’s a phenomenal thing, and I honestly believe that I have leadership in that environment. People would respect me as a woman. I mean it’s definitely difficult because we are in a men’s world, but once they figure out and know that I know what I’m doing, they respect me even more, so it’s a good platform for me. I love working in the menswear world.

What advice would you give to a young black girl who would like to follow your path?

If you meet with your 20-year-old self, what would you tell her?

Speaking about black people, in the US and beyond, it seems difficult to fit in a society where discrimination and racism are still very present. I’ve lived in Italy for the past six years, a country with a poor reputation with regards to those matters. I, myself have fortunately never experienced racism here, but I’ve clearly witnessed it, and felt a bit of frustration among certain Afro-Italians I’ve met here. Probably because of the lack of recognition towards them as “true” and capable Italians from their own country, Italy. Italians without Citizenship. So, about the race issue, what’s your view on the Black Lives Matter movement? At some point in your life and career have you ever felt like you had to do twice as much to get what you deserved?

A hundred percent. I mean, I definitely feel Black Lives Matter it’s an important program they’re putting on. I definitely feel like it’s a movement that we should believe in, because of all the stuff that’s going on around the world. We just need to learn how to deal with it in the most impulsive way. We’re not reactive, we’re proactive.

I’ve been in that position, as a black woman, I had to work extremely hard. And that’s why I said if I were to bump into my younger self, I would just say, “Keep pushing” because we’re always going to be in that position, and it’s ok, as long as we know it and we accept it. And we know we just have to continue to work harder than anyone else, then it wouldn’t matter. It starts to not feel like that. You understand what I’m saying?

So that’s the whole process of being more proactive than reactive. I always tell young African Americans who come to me to looking for mentoring them that their mums and dads know no one. That’s how they have to face their life. Your parents know no one and you’re starting from scratch, and it doesn’t matter if you do know someone, you’re still starting from scratch, you have to work harder than anyone else. And that’s the reality behind it.

What makes your job special to you?

What makes it special is having a passion for it, I love what I do. The people I work with are phenomenal and inspiring. As long as I keep learning it becomes special and it educates and improves myself. The people around me or that I meet make it more exciting. That’s the job on the daily basis.

All of my travels are definitely surrounded by brands that I like, every city we go to. So it depends on what city I’m in. In LA for example I’ll say Cotten Citizen & John Elliot; when in Japan 1LDK; in Milan, Delikatessen and Corelate; in Paris, YMC and Art Comes First; in London, Matthew Miller, JW Anderson and T-Michael; and in New York it would be Knickerbocker, Rochambeau, Deveaux and Pyer Moss. There are so many but I can start with these.

Liberty Fairs opens its doors today at Pier 94, NYC, and it will then head to the Sands Expo – Venetian in Las Vegas (February 20-22)