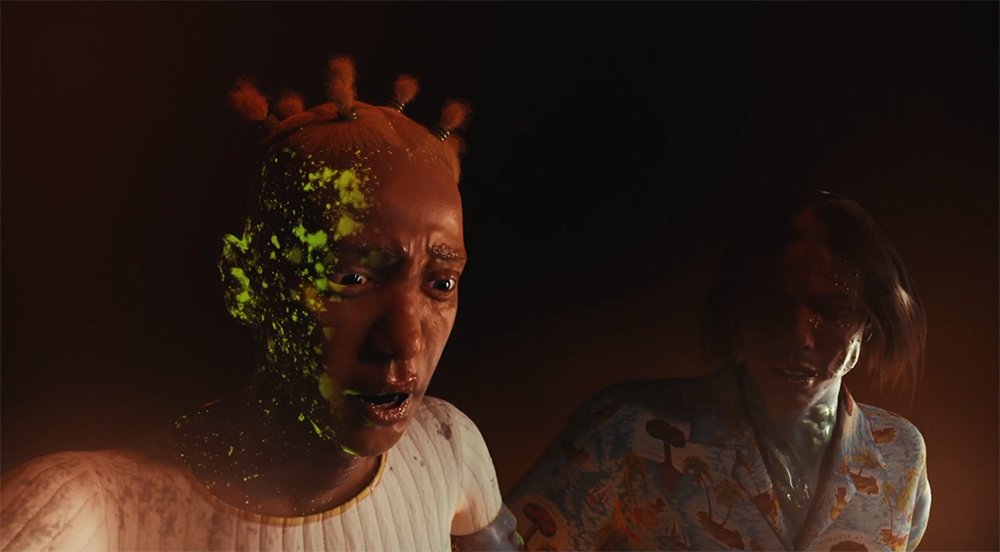 Entering QuinzeQuinze’s creative realm is like taking a deeply emotional stroll into a surreal, dystopian ancestral dimension where no knowledge or preconception are of any use. Creating bridges between the beautiful and the dark, the Paris-based collective QuinzeQuinze has recently come back with a new EP, Le Jeune.

From their infectious sound informed by futuristic electronic sounds, traditional percussive instruments (to’ere, steel drum) and South American and Caribbean influences (candombe, calypso, moombahton), to their 3D radiation-altered characters and landscapes, QuinzeQuinze evoke images and metaphors in the form of authentic or invented legends, forging a unique narrative style by crossing anachronistic and incompatible universes with historical facts which project the listener into an unexplored fantasy world.

Born in 2013 as a multidisciplinary collective then turned into a music act, the collective consists of Ennio, Julia, Marvin, Robin and Tsi Min. Ennio and Tsi Min are originally from Tahiti and met Marvin and the other members of the collective when they joined the Amiens’ School of Art and Design (ESAD). Since their first school project, creating the identity of a fake music band, sound became as important as images and their journey started: “All of us amateur musicians, enthusiasts of graphic and digital arts, we naturally found ourselves at the end of our studies in 2013.”

Two years after their first EP Nevaneva (2018), which was showcased as a breathtaking musical short film depicting “the genesis of their ‘climatic’, colourful and insular music” QuinzeQuinze released Le Jeune, their second EP last December. Shedding light on 30 years of nuclear experiments carried out by France in Tahiti between 1966 and 1996 both sonically and visually, this incredibly original EP recounts the legendary tales of radioactive characters inhabiting idyllic, yet devastated post-apocalyptic landscapes, giving us yet another superbe glimpse of the exceptional storytelling skills of this collective.

As they are currently working on new songs and wrapping up the video for the track Boléro, we caught up with QuinzeQuinze to further explore their stories and heritage, their visual and sonic universe, as well as the artistic scene in Tahiti.

GRIOT: How did you start working together? What does QuinzeQuinze mean?

QuinzeQuinze: Originally, the QuinzeQuinze collective – which means Fifteen/Fifteen in French – was born out of a desire to remain productive and creative even after school. We gave ourselves a simple rule: offer sound and visual content every two weeks on our website. The music was shared via the different entities of the collective and the projects  were voluntarily protean as we wanted to be able to express ourselves freely. It  could be a simple video clip, a mini web experiment – which we like to call “digital  candy” – or experiments using programming software such as Arduino or Pure Data  which led us to create interactive installations, such as musical instruments with new goals. In the latter case, the idea was to introduce an uninformed public to music and on the other hand to present the universe of the collective.

After two years of experimentation, we focused on the self-production of La Luge’s EPs Gamineries, Ta’a’s Poisson-volant and John Pdf’s album Fa’ama, and then joined forces and played these tracks live. But what was officially the birth of  QuinzeQuinze as a group remains the short musical film Nevaneva, written and directed by Katlas Production in 2018.

How did you evolve artistically from a multidisciplinary collective to a musical group?

The first performances took place in spaces not dedicated to music. We soon realised that the impact we could have with an “interactive installation” was much less (interactive) than a concert in its simplicity. In reality, we still have a multidisciplinary practice, but over the years our work has mainly been at the service of music, the medium that we believe has the biggest effect on our emotions.

What were the main steps of the creative development of your narrative style, both through music and visual art?

At the start of most of our works, and in particular with Nevaneva, we evoke images or metaphors in the form of authentic or invented legends. This roundabout way of approaching music allows us to structure our songs around considerations other than aesthetic and stylistic ones. Once these images have been digested, sound research often comes around the different narrative elements of the theme. The last step is to make the whole thing “approachable”, i.e. pleasant to listen to,  without taking into account the constraints we had imposed on ourselves. Finally, the videos are created with the intent to amplify the meaning and to clarify the notions that words and music alone cannot convey.

Le Jeune is your latest piece of work. The sense of multidimensionality created by your unique sound exceptionally mirrors the many layers of meaning concealed into each track. Walk me through the ethos of the EP. Where did you draw inspiration for this project?

The best way to talk about this EP is to give the first mental images that came to us.  With Pa’ipa’i, who introduced the EP as a spin-off of the Nevaneva project, we imagined a parallel island where humans were growing like vegetables. These men would then absurdly throw themselves off a cliff. The story continues in the thoughts  of one of them, Ta’a. This character, played by Tsi-Min, gives us his impressions recurrently during the different episodes of the EP. During the creation of Le Jeune, we tried to cross anachronistic and incompatible universes such as legendary tales mixed with historical facts where ordinary people suddenly find themselves projected into a fantasy world. The general spirit is that of a joyful apocalypse, of a search for paradox in everything.

The visually striking aesthetics is another key element of the EP. How did you create it and how does it link to the sonic dimension?

For the conception of the visual universe of the EP, we wanted to illustrate nightmarish themes with means that would allow us to apprehend them in a sublime and fantastic way. Just like sometimes in our songs where emotions mix, our visuals try to create bridges between the beautiful and the dark. The use of 3D seems interesting to us because it allows us to create entire universes. Moreover, the usual uses of 3D are so connoted that it is enough to use them in an unexpected way for the viewer to feel a loss of reference points. We are currently finishing the clip of the song Boléro in which we are staging ourselves in a rather singular aquarium. Without revealing too much, we have tried to present a complete psychedelic and Quinzequinze-like universe, in which you are invited to enter as if you were in a desirable nightmare.

The action takes place in Tahiti during the spread of nuclear tests carried out by France in the Pacific. A disjointed narrator presents the surroundings and its history through a series of paintings that oscillate between post-apocalyptic atmosphere and paradisiacal landscapes. Between 1966 and 1996, France carried out almost 193 nuclear tests in French Polynesia. This video aims to present the Tahitian and Polynesian origins of two members of the group through this sometimes forgotten episode, whose themes are less sugar coated than the usual representations associated with the cultures of the Pacific. An attempt has been made to make a visual tale: the story is told and embodied by the members of the group. They look altered by a radioactivity whose appearance is sublimated. We thought it was interesting to use magnificent and surrealist representations that nevertheless illustrate this fatal theme. Each scene presents a different stage in the spread of the nuclear explosion. These scenes are inverted so that the spectator understands the origin of the worrying alterations shown on screen (the radioactivity of the characters, the cataclysm of the landscapes) only in a second time. Beside your artistic project, you also aim at spreading and talking about Ori Deck, an electronic style close to moombahton, which is very popular in Tahiti at the moment. Tell me about the genesis and history of this style?

“Ori” refers to a dance or dancing in Tahitian; “Deck” means “platform” or  “turntable” in English. Originally, the Ori Deck is a dance performed by the Tahitians, borrowing the postures of traditional dances, but also those of the tupapa’u, the spirits of the night. Possessed by the sound, the dancers walk on a deep and aggressive moombahton, as if they had shaped it by their ample and jerky movements until it became endemic to the island.

What’s the artistic scene like in Tahiti? What are its characterising sonic vibes?

In Tahiti, art draws much of its source from Polynesian culture, with which Tahitians are still renewing ties today. Ancestral customs and traditions open up to the different horizons brought by new practices and technologies. Several local artists  are trying to redefine culture in its original form and with what it offers today. For example, the visual artist TAHE questions this reality by using different modern codes, borrowing for example certain characters typical of American popular culture and the opponents of materials specific to Polynesia (coconut fibre, bones, shells, pearls, mother-of-pearl, iron wood etc.) giving shape to objects, sculptures or paintings marked by this rivalry between tradition and modernity, very characteristic of Tahiti. The music follows a similar pattern. Although it is influenced by the major current musical trends, a significant part of it is an extension of the cultural heritage of Polynesia, notably the Heiva, which mixes traditional dances (the Tamure) with percussion ensembles known as To’ere.

What are your biggest musical influences? How have they evolved over the  years? What about references in the art world?

Even though we each have our own particular musical influences, the English scene  remains a common point of interest. We can mention Micachu and Jai Paul among others, whether it is in the sound textures, in the way they mix different musical styles or in the way they work on the mixing of their tracks. There is a form of  honesty and almost radicalism in their offering that is greatly appreciated. On the other hand, we are also very excited by multi-faceted artists like Björk, Flying Lotus or Arca, who cleverly navigate between music, performance and visual arts. What we like about all these artists is that they are in constant evolution, unexpected, but  due to their particular artistic sensitivity, they always manage to keep their own identity. We are in awe of the great freedom they enjoy.

The world as a whole has been going through some complicated times. The sense of jeopardy and chaos — both physical and with regards to moral values and  basic human rights — which has spread across the many levels of people’s existence has put us all to the test somehow. What has guided you as a group through this year, personally and artistically?

As we try to use music as a means to get away from today’s world, it is unlikely  that recent events will have an impact on our artistic production. On the other  hand, the brutal changes at work in social and political interactions must influence every human creation at some level (consciously or not). At the moment, it would be too complex for us to try to predict the nature of these changes…

What projects are you currently working on? What lies ahead for you or  hope for in 2021?

We are currently working on a series of tracks to listen to alone in your room…  The best thing you can wish us is being able to go back to the studio as soon as possible.