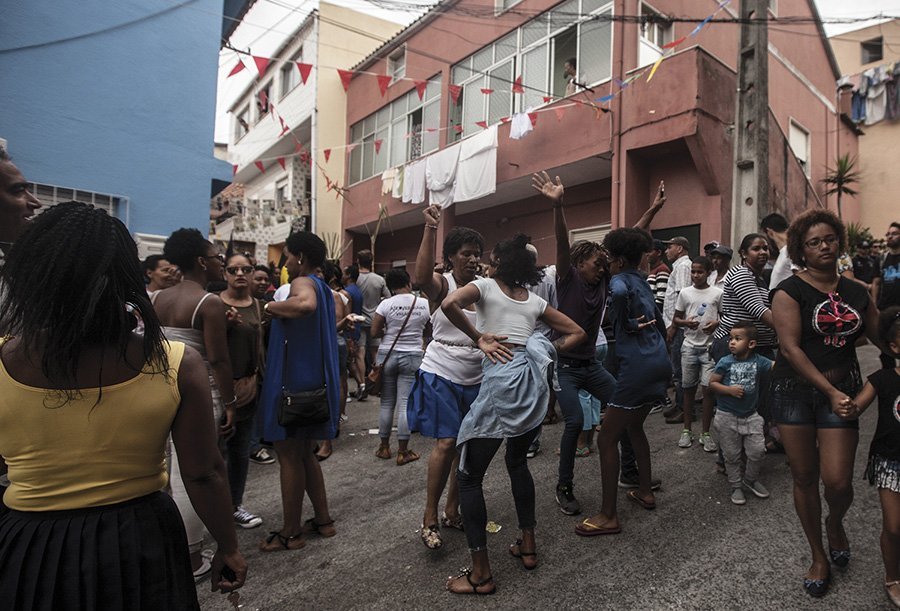 Most self-respecting Euro-Atlantic capitals or large cities contain a specific area, a sort of enclave whose name, when given, escapes the official toponymy but inhabits the main body. We can find them in Rome and Milan, Paris and Brussels, London or New York. In Lisbon, “Rossio is the place where Africans meet, regardless of whether they are arriving by boat from the South Bank, by train from the neighbourhoods around Sinatra, or by bus from the suburbs. Rossio cannot escape the African other. It is the focal point for chromatic visibility in the city, and it has been this way for long time.” Little Guinea, the enclave which gives its title to the story of Rossio, is where one of the thirty-nine texts of the fourth issue of Indie anthology La Rampa plays out.

Founded by researcher and photographer Chantal James, a Canadian of Guyanese and Welsh descent, and Portuguese art and cultural historian Inês Beleza Barreiros, La Rampa’s first three issues were devoted to Haiti, Cuba and Brazil as a ” counter-atlas”, an anthology that amplifies new perspectives, narratives and counter-histories. The stories in the current issue show the complexity of contemporary Portugal, with its colonial wounds, its disputes over what may and may not be seen, and who should or shouldn’t speak on behalf of the country.

Although it appears as the fourth text, Little Guinea caught my attention for the way its author, the writer Jean-Yves Loude ingeniously describes it. He combines those familiar national symbols such as churches, culinary traditions, historical places of gathering and socialization, with the stories of people who are often deemed alien but who have lived in that space since the sixteenth century. By doing so, he provides a first interpretation that is accessible for those not familiar with certain topics or historical events, or those who try to ignore them.

Browsing through the pages, one finds the chromatic visibility described by Loude, in Rua Poço dos Negros (Blacks’ Pit Street), a text by historian James Sweet; in the poetic, celebratory and evocative images that restore, restitute dignity to reviled bodies, stories and places; in essays, stories, poems, artworks by academics, musicians, artists, activists who overturn North and South. Page by page, the echoes of the former colonies hit, contextualizing the present of a former Empire that insists on looking at the world through a lusotropicalist gaze while the descendants of the colonized, ravaged by the racist legacy of lusotropicalism, struggle to get out of the margins.

The collection of such polyphonic voices by La Rampa highlights Portugal’s difficulty to reflect upon its colonial legacy, as well as its inclination to whisper acknowledgment; “yes, but…”, where “but” turns into a celebration of the enterprise, a sugar coat on the colonial past that reduces its vastness and social impact. Large parts of Portuguese society appear to be content with history books that host the singular voice of the ‘winner’, and monuments that glorify  ‘The Discoveries’, such as the 1958 Monument of Discoveries, or, sick with nostalgia, attempts to erect a Museum of the Discoveries—to celebrate ‘great men’ and ‘great dates’ as academic Patrícia Martins Marcos points out in her essay History and Narcissio’s Reflection (A História e os Narcisos ao Espelho).

“Monuments are not generally built to commemorate defeat; the defeated dead are remembered in memorials,” author and professor Marita Sturken indicates in Monuments and Memorials. However a “Memorial and Tribute for Enslaved People”, long fought for by the descendants of the ‘defeated’ (Djass – Association of Afro-descendants), will be built to combat historical revisionism and to honour “the millions of women, men and children enslaved by Portugal”, to “celebrate the humanity and resistance denied to enslaved people” as professor and activist Beatriz Gomes Dias writes in Skeletons in the closet (Esqueletos no Armário). In this new context, in which public memory of slavery is institutionalized, demands for financial and material reparations for slavery and the Atlantic trade are resurfacing according to social and cultural historian Ana Lucia Araújo.

Dona Vitalina, Dona Mimosa, Dona Tota and Dona Mariazinha, whose intense portraits speak of displacement are the survivors, the reason why Memorials and reparations are necessary. But like the inhabitants of Cova da Moura, who steer a festive procession of Kola San Jon through the streets of the neighborhood, they are haunted by the living ghosts of the Portuguese colonialism, which forbade the traditional festive processions because they were perceived as too ‘African’ or too ‘sexual’.

“Reparation means the negotiation of recognition. One negotiates the reality. In this sense, it is the act of repairing the harm caused by racism, by changing structures, agendas, spaces, positions, dynamics, subjective relations, vocabulary, that is giving up privileges,” interdisciplinary artist Grada Kilomba notes in Denial, Guilt, Shame, Recognition, Reparation (Negação, Culpa, Vergonha, Reconhecimento e Raparação).

It is surprising to see that the Municipality of Lisbon and the Lisbon Tourist Office are among the main sponsors of this anthology. La Rampa is something between a book and a magazine, a travel book and a tome of History—but also an art catalog to keep in one’s library. It is certainly an enlightening celebration of the stories and cultures of African and Afro-descendant communities in Portugal, moving us through the tunnels of a dark colonial history, reviving hidden histories and connecting the dots that constitute contemporary Portugal.