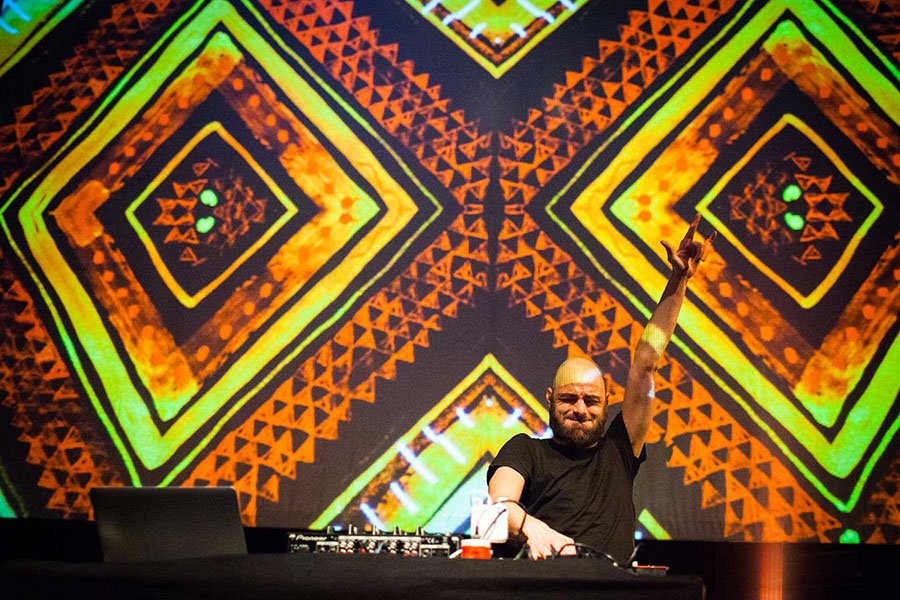 Cristiano Crisci aka Clap! Clap! aka Digi G’Alessio is everything you don’t expect.

Jazzist, performer, producer, DJ, singer, researcher, filmmaker. His extremely diversified flair includes sounds ranging from jazz, punk, chicago footwork to tribal and world music. These together with a bubbly and eclectic personality create an artistic profile quite rare to be found these days.

He’s had such a great international success in the last few years that Paul Simon wanted him to co-produce some tracks for his latest album.

After having had a long chat with him, I have no doubts on the reason why. We talked about his artistic journey, his international experience and his fascinating world’s instruments research and field recording projects.

Clap! Clap! is a real force of nature and behind the energetic performer lies an intriguing curious mind that thrives through music in all its forms. You can enjoy his music at Jazz:Re:Found Festival (Turin, 7-10 December.)

GRIOT: So, I’m talking to Clap! Clap! at the moment, but you’re also known as Digi G’Alessio. What are your ongoing projects? Which ones are over?

Clap! Clap!: Yes, I’ve tried to work on both for a while, but Digi G’Alessio is paused at the moment. Clap! Clap! is going really well and having an incredible amount of work all the time and a family (I’ve a got a one year old daughter), I can’t work on both. So I’m focusing on Clap! Clap! I do  live sets, mixes, collaborations and I work a lot on production for me and for others. Digi G’Alessio was something for the dance floor, to say “let’s just smash it!”, but as Clap! Clap! I try to stay stylish.

So, you smash it with electronic music, but you’re a jazzist. Tell me about your musical background.

Yes, I come from jazz and I still play it. I play the saxophone. Actually, I started with one of the first pop crews in Florence, the 3CK. I used to sing with them at the beginning of 2000, then I started playing sax and performing standard jazz in various clubs in Tuscany.

After that I started experimenting and, like all teenagers, I fell for the inevitable punk hard core craze. For a couple of years I was in a punk band made of double bass, sax and drums called Trio Cane. Then I went back to electronic music but I’ve never really mixed it with the saxophone. The sound was too “cheesy house”, perhaps because I’ve never been good enough to combine the two in a cool way. I then joined another trio, A Smile for Timbuctu with whom I often played in London between 2003 and 2004. That’s how I got to the solo project Digi G’Alessio in 2008.

Your music encompasses various sounds, cultures and genres. What about your creative process? How do you combine so many different things?

Well, it all started for a laugh the day I was finishing my Ivory EP for Lucky Beard Records. I just wanted to create something to make the dancefloor go crazy, so I thought of combining some electronic drums with samples of tribes from central Africa. The outcome blew me away so I started researching these sounds and experimenting with them.

I didn’t really know where to begin from nor how to do it, so I created the project Clap! Clap! which is based on researching music from all over the world. My aim is to mix together various sounds to create something new. For example, there are only a few african percussions in Tayi Bebba and it’s weird because that’s the warm feeling you get at first impression. Actually most of the percussions are from Siberia, which is a very cold place. I find it absurd! No matter how freezing it is, the sounds represent the tribal and rural side of life. This curiosity that I have took me to the most disparate places, even in Italy. In the south there’s a huge musical heritage that some researchers try to study and record back in the sixties. This is also something that we’re trying to do at the moment, even though there’s no funding available and it’s a suicide to do it at your own expenses.

I’ve seen you perform live and… how can I put it… you sing, you dance, you jump from one deck to the other. How do you do it? Where do you get your energy from?

This is the way I am! I need rubber walls in my studio, because I could tear the place down any moment if I don’t pay attention!

(Watch this Boiler Room live set to see for yourself!)

How did you find your experience abroad as an italian musician, producer and Dj?

Well, it’s difficult to generalise. We have our amazing folkloristic traditions in Italy but we also have lots of bad habits. For sure we’re a little behind for certain aspects and it’s easy to notice when you travel abroad, but you can’t have your cake and eat it. I feel the way people party has changed, in the nineties there was a complete different atmosphere at nights and festivals around Turin or Bologna, it was more vibrant and lively.

Now I feel most of these vibes when I’m abroad. I was in Leeds a couple of weeks ago and it was mad! Leeds as well as many other university towns in the UK are absolutely crazy. In Italy people enjoy themselves of course, but there’s more closure and discretion on the dancefloor. I’m sure this is going to change once the new generations start clubbing.

Why is that, do you think? Is there something that italian clubs used to offer in the past that is now missing?

Perhaps! I don’t really know to be honest! Maybe this generation is particularly feeling the difficult times we’re going through, I mean politically and economically. It’s in the air in Italy and this might influence people’s mood and attitude to clubbing or to the nightlife in general.

Having said that, the most brilliant and exciting festivals I’ve ever been to are in southern Italy. The vibes are just terrific! A few years ago they also started organising boat parties the italian way, so the boat stops offshore and people bathe in the Mediterranean sea while listening to incredible live sets. The lineups are amazing as well!

Which are the best places to go perform then?

I don’t think there is a place. You can find both positive and negative sides in each country. Perhaps you go somewhere and the equipment isn’t great on stage but then you have the best food, you go to the beach and so on. So I think each experience is unique and I love my job, so I accept it with good and bad sides.

However, I’ve travelled to Japan a few times and I have to say that I really enjoyed myself there. People live the nightlife in a complete different way over there, maybe because they still have boundaries for certain things. They just go mad when they club, I love it,  it’s amazing to perform there!

What has changed in your life since you’ve had this great success abroad?

Well, it has definitely changed the way I work. Before I only used to work in Italy and I was alone, I didn’t have a manager nor an agency to help me out. Now a whole new perspective has opened up for me about the world of management and booking as well as the music industry itself. I find it very interesting.

What music are you listening to at the moment?

This is a very difficult question because I’m concentrating on my research projects at the moment, so I’ve been binge-watching documentaries, listening to choirs, laments, howling and stuff like that.  So it’s very hard to say! I listen to weird music, that’s for sure!

So do you watch documentaries to find sounds to sample?

Yes, but I also watch them because it’s something that I really like to do. Speaking of which, I have started a field recording project in Sardinia (Italy). There are a lot of native instruments in Sardinia.

For example, Pinuccio Sciola is a sculptor and he invented the “sounding stones”, huge stone sculptures that when rubbed produce amazing unique sounds. You can hear that igneous stones produce a very  low and warm sound while granite stones have a very high tone as the rock’s fibre is tighter.

So we are recording audio tracks to create awareness about these instruments, and also talking to Pinuccio’s family. Another really cool native instrument from Sardinia is called launeddas, a sort of bamboo flute. The only school in the world to learn this instrument is in San Vito and it’s becoming famous worldwide. My objective in this project is also to record all the lullabies and rhymes that grandmas used to sing and nobody passes on anymore. I believe it is an incredible heritage that we shouldn’t lose.

When is this documentary going to be released then?

We don’t know yet but we’re working on it. So as soon as the material is ready we’ll publish the first edition. It will be a sort of archive collection, with high quality sound, which is amazing because the only recording of these instruments were done in the fifties.

What are you working on at the moment other than this?

In February my new album A Thousand Skies will be released on Black Acre with Warp publishing. The double LP will come with a story that follows the same concept I created for my album Tayi Bebba, but this time I’m talking about a journey through the stars. I wanted to try and give people some good vibes and positivity, but given the times we’re living I don’t think I’ve done a good job.

Yeah, things are tough these days. Where would you go if there was a third world war?

Well, I think WWIII started a while ago! I don’t know where I’d go to be honest, because I Iive between Florence and Sardinia, but the city that I love the most in Italy is Turin. So I don’t really know. I’d probably move to another planet if I could, or go find Atlantis, I might have a good chance!