Ivan Forde On The Politics Behind What He Makes 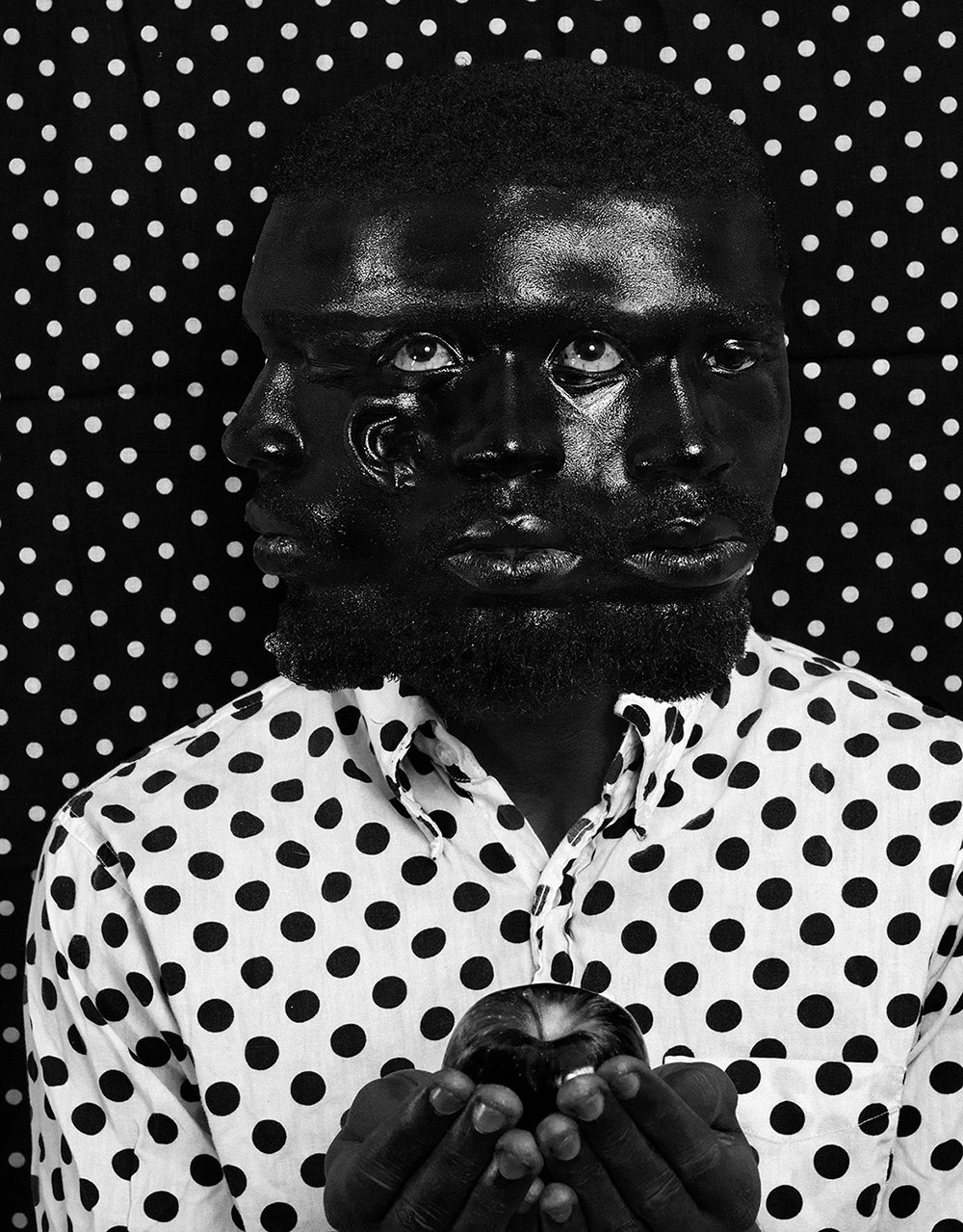 Ivan Forde, The Fruit, 2012 - COURTESY the artist and Galerie Number 8

Talking with photographer Ivan Forde, you realize he is constantly pitching himself into an unknown future that he makes up as curiosity dictates. He’ll tell you that he came to photography by way of literature – 17th century English poetry to be exact. Then a nagging interest in medium and process led him to an MFA program at Columbia University where he is studying printmaking, sound, sculpture and ceramics. Next up, he says, is more experimentation with video, animation and performance.

As you can imagine, that keenness of mind and inquisitiveness translates into photographs that are mesmerizing. Like dreams, they are a combination of things seen and unseen that push a lot of emotional buttons.

There is a mystical, sci-fi feel to his work, with certain contrasts and tensions making regular appearances: manmade and natural, human and superhuman, black/white and color, modern and ancient. There is always a lot going on.

A quick Google search of the Guyana-born, New York-raised artist reveals a career that is young but rich, already marked by distinct periods of experimentation and growth. The search also pulls up the names of several awards and accolades that he never mentions during an hour-long chat. So add humble to the list of his character traits.

Forde recently took a break from creative pursuits to talk about everything from Sun Ra to surrealism to what happened when he put himself in front of the camera.

GRIOT: Talk a bit about your path to photography.

Ivan Forde: My sister gave me a camera when I was 16 so that locked me into having a deep interest in seeing the world critically. Then I participated in a teen photography residency taught by Russell Watson at the Studio Museum in Harlem in my senior year of high school. I was meeting artists like Deborah Jack, Hank Willis Thomas, Saya Woolfalk and seeing how a museum works. That experience showed me that a career in photography – and even the arts – was reachable.

Then at university I studied literature and not photography because I felt I wasn’t as strong of a reader as I could have been. I had the privilege to study John Milton’s poetry with Milton scholar Robert Stein. He opened my eyes to poetry in general, especially 17th century English poetry. Really weird shit but it was super visual! And during my time invested in theory, reading and responding to those stories, I began writing my own poetry.

I was shooting this whole time –friends, spaces, myself –and my senior year I came back around to photography and incorporated it into my studies to create a project exploring Paradise Lost and its visual universe. Things just kept going uphill from there.

How does being Guyanese play into your aesthetic? And what about growing up in the City?

I moved to New York shortly after my tenth birthday. My Guyanese identity hasn’t surfaced in my work in an apparent way yet. But I think my interest in nature [comes from my childhood there]. My Dad worked in agriculture and my school wasn’t that far from his job. I’d visit on his lunch breaks and we would walk through these gardens and he’d show me different plants. I see that early relationship to nature in the work.

Right now it’s the duality – and it’s not a contest – between growing up in Guyana and its super natural landscape with abundant nature and New York with its multitude of differently natured people. I’m confronting these two aspects of myself, and representing them by multiplying my body or adding colors or textures.

In your silkscreens like Coming Of Enkidu and Encounter, what’s the significance of the blue cyanotype treatment of the image?

I think it’s beautiful. Cyanotype was originally used by Anna Atkins to study plants for a scientific reference book. But in these works I’m thinking about skin color. When I was younger, especially when I moved to New York, I became socially aware that I’m dark-skinned. In my earlier works, like Paradise Lost, the figures are extremely dark-skinned to the point where they reflect light. And now with cyanotype I see it as a response to the saying, “so black you’re blue.”

High contrast black and white photography was something that I saw a lot of photographers doing in 2012 – 2014. But I wanted to go deeper, investigating alternative processes and particularly what it means for my flesh to be represented in a vibrant blue tone.

Blue has equivalences to our sky and oceans, things that are complex, layered, and mysterious. But how does that read when ascribed to human form? Do viewers still read the subject politically as a black person within the context of black portraiture?

Several of your pieces, like Incursion of Paris, have an older, historical feel to them as compared to earlier works that seem sleeker. What is that shift about?

Incursion of Paris has an older feel to it mainly because it’s from the time that I entered a printmaking practice. Incursion is a photo-polymer etching. Whereas with inkjet prints the ink sits on top of the paper, in an etching the ink or paint rather is in the paper and that gives it a more immersive feeling – you want to get closer.

So it takes this futuristic digital collage process and then renders it with this older medium, which brings it into the historical reference space. I like that because I’m interested in disrupting world-historical narratives and asserting my body in times before or after institutions – what spaces were cultivated in those eras, what aspects of culture or how people relate to each other would be possible without the apparatus of the state around us?

How would you say your work has changed over the years?

I’ve become a lot more vulnerable and open in my process and the work in not granting access to my body in a direct way, but through photographic and print processes, digitally transforming, or multiplying it for the invisible audience behind the camera I perform for. This is not exactly self-portraiture—yes, I’m making them and they do have implications in my personal life and history – but it’s coming to terms with my body as “all I have” and what do I do with that. How do I use it in the world? How do I use it to read, to resist, to work, to ask questions, or relate to people? How do I use it to love?

Going back to when I was a teen I used to take pictures of friends and then I’d have these ideas for images or I’d see something and want to recreate it right away. So rather than waiting for my Brooklyn friends to come uptown [to Harlem where he lives,] I thought, “OK, let me just do this and get in front of this camera to make this thing happen.” Before it was just fun and spontaneous whereas now its still fun but I’m more conscious of what I aim to express, which is self-love.

Who are your musical influences? What – if anything – do you listen to when you work?

Music is huge and that’s in part why I’m taking the time and space in grad school to study digital music more so than visual art. Sun Ra showed me that music can be immersive and historic and cool with lights and costumes. Right now I’m also listening to a lot of Kid Cudi, Miles, Sa-Ra, Prince and Alice Coltrane who is huge on my list right now.

I’m not a musician but so many of my close friends are who I’ve collaborated with. I’m interested in entering that space [making music] as a visual artist making sounds for the images and drawing out this world that I want to help surface.

I can make good images, I’m confident in that, but what would they sound like in an immersive exhibition space? How can people not walk up to these images but walk into them and be there? I don’t necessarily know what I’m doing always but I know that right now I need to learn certain skills and dig deeper in order for this thing, this whisper trapped in a bubble at the bottom of the ocean to surface.

How would you define success for yourself? Or is that even on your radar?

I feel successful when I know that I can make an experience happen for a viewer, even if it’s just for 5 seconds. That someone can walk away from the work and feel “Whoa ” – not strictly about the work but particularly about the world, or the person they are with, or where they are going or what they’re pursuing. Also if I can work at something and learn it to the point where I can teach it, that’s huge for me.

Overall success means if I can get to the point in my work where it is sustainable and I’ve built enough relationships to set up an artist’s residency or exchange program bringing international artists to Guyana. So many artists like Theaster Gates, Dustin Yellin and Rick Lowe are incorporating this kind of tactic into their practices.

It would be a space where young people can learn hard skills, literacy, and develop a broader sense of art and a critical view of the world. Because when I go back to Guyana and say to people that I am an artist, they ask, “Oh yeah, you paint houses? Or you make music?” Its funny, but that’s how art is viewed by some people there.

Do you see yourself as a part of any particular artistic tradition?

In terms of photography, I don’t know a tradition that I can say I’m a part of or want to be apart of. Earlier maybe I would have said surrealism. But that’s not where the energy is right now for me in terms of art. The more powerful stuff that I respond to is not necessarily surrealist. I’m more interested in the politics behind what one makes. The body as material and subject. I’m not saying that surrealists weren’t doing that. But some took a lot of shit that they just didn’t reference. I’m interested in stating my references.

I identify as a photographer because that is the language through which I first approached contemporary art and art making. But right now I’m thinking a lot about the language of print production and distribution in relation to black bodies and what does it mean when – or how – we make a print, whether from objects we find, from objects we make, or acting on material with our bodies.

In my constellation of influences are artists like David Hammons, Rauschenberg, and particularly now, Belkis Ayon, an artist whose work I recently discovered. She was making powerful collagraphic prints in Cuba during the 1990s, dealing with myth, representation of the body, and abstraction. Her palette is black with tones of gray and her materials are varied but resourceful.

I’m more so interested in conversation than reinforcing tradition. I find the conversation around these artists most stimulating, and that’s what I want to be a part of.

You can find Forde’s most recent work at the online art gallery Gallerie Number 8, and at Affordable Art Fair, Bruxelles, February 16-20, Booth D4.