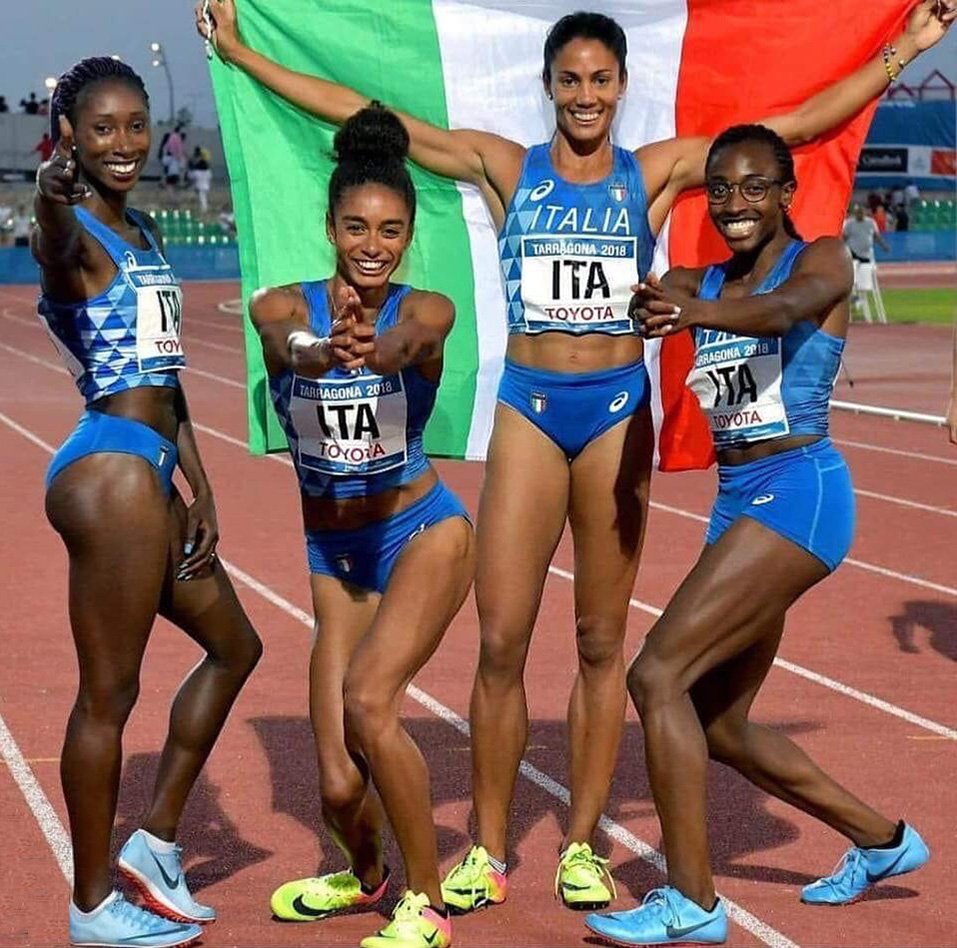 The gold medal won last saturday by the four Italian athletes who competed in the women’s 4X400 relay at the Mediterranean Games is not just a sporting victory, it is a cultural and political victory which contrasts the toxic atmosphere that we are breathing at this current time in Italy.

Over the weekend, the picture of the four Italian gold medalists Benedicta Chigbolu (born to an Italian mother and a Nigerian father), Raphaela Luduko (born in Aversa, Swiss, to Sudanese parents), Ayomide Forolunso (born in Nigeria to Nigerian parents) and Libania Grenot (born in Cuba to Cuban partents), has gone viral. For me, and many other Italians, it represents a glimpse of light in one of the darkest times that our country has lived in recent years. As divisions within our civil society are fueled by the “hyper-present” and “truly-absent” politics and become ever more marked and clear, this quartet is the prompt response to the xenophobic ideas increasingly spreading amongst people.

Many are sharing this wonderful image on social media using the hashtag #apriteiporti (#opentheharbours), while others consider it exploitation; but, at the end of the day, I think it’s a matter of political coincidences. It’s a fact, black people always have to do more. We must prove more, we must behave better, we mustn’t make mistakes, we must win in order to be recognized and earn a position that in theory we should already have in society.

There are plenty of examples, especially in the sports world. Just think of the boxing champion, Leone Jacovacci. Born in Congo in 1902 to Italian tfather and Congolese mother, during fascism he fought hard—in every sense—in order to be recognized as Italian and compete for his country as he had no citizenship. It was only thanks to his talent and the number of European titles he won, that he eventually acquired the status of citizen. Mussolini hid him and people wondered why he was not being asked to compete in tournaments. In reality most people wanted him back on the ring because even if he was a black man during the peak of racial inequality of the 1930s, he was the best Italian boxer they had. They thought: “If he’s a winner he’s one of us!”

In present day, the most obvious example is Mario Balotelli: when he scores, he’s a national hero; but when he loses, everyone blames him – as if he was responsible for  his entire team. And when it comes to naming him the captain, innuendos about his skin color are not wasted. So, why rush to say that it’s “radical chic” to use skin color to boast—as the Italian politician Giorgia Meloni did—when she was the first to talk about ethnic replacement?

However, this new women’s athletics victory makes you feel more Italian and happy to be so, it makes you scream out loud “Dajeeeeeee” (Gooooo!), without the fear of being out of place, like when during the World Cup or the European Cup, you find yourself watching matches in the middle of a crowd that almost denies your right to show your attachment to the Italian team, because you know, there is—and there will always be—some genius saying “there are no black Italians” or looking at you in amazement, as if you were an alien.

This is not just a sporting victory, we all know. It is a social, cultural and political victory that contrasts the toxic atmosphere that we are breathing. It is also a victory that shows to those who don’t want to recognize us and have us around, that this is the present—and the future—and that we are here to stay. The time has come to stop spreading hatred and terror.

Finally, it is a victory against the cowards who call us the ‘N’ word from speeding cars while we are on our way back home. It is a triumph against any race clichés which redefines the black body and makes it shine—in green, white and red (the colours of Italy’s national flag).

Of course, this will not transform Italy overnight, but from here on, we can start again. Today, this image makes me breathe, it makes me rejoice, it attenuates my worries and my fears, it gives me a sweeter vision of the reality in which we find ourselves. This is a new beginning.