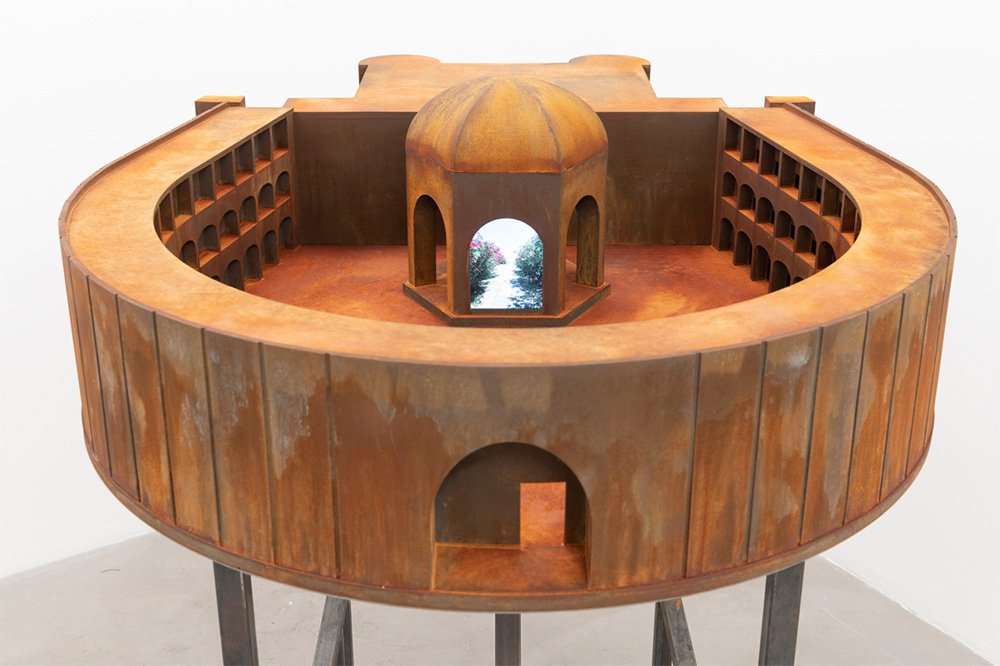 According to nineteenth-century criminologist Cesare Lombroso’s 1876 work Criminal Man—original title, L’Uomo Criminale—the tattooed XIX century man was ancestrally predisposed to crime. The protagonists of Entanglements —a solo exhibition of the Roman-born, San Francisco-based contemporary artist and anthropologist Fiamma Montezemolo curated by Matteo Lucchetti at Magazzino—include prominent Italian political dissidents like Sandro Pertini and Altiero Spinelli who were confined and jailed in the panopticon-type penitentiary on the island of Santo Stefano. Another protagonist is the contemporary migrant body, which seems to have merged with the Mediterranean Sea and with its perpetual motion/resistance interrogates the monochromatic whiteness of the Italian flag and its national identity.

In Montezemolo’s new video installation The Serpent (2019) at the exhibition, one is immersed in the darkness that is alternately lighted up by a series of Oaxacan barro negro skulls. A snake tattooed on the body of an imprisoned man (Lombroso assumed that tattoos could be used as identifying signs to observe criminal subjects) clears the human body of prejudice by turning into the Mesoamerican deity of the wind, protector of knowledge and art.

In Project Perucatti (2018) named after Eugenio Perucatti, one of the last directors of the penitentiary, Montezemolo inserts a screen in the control tower which is positioned in the center of the prison showing various images chosen and created by the artist by reading the diaries and letters of the dissidents, who wrote about open skies and landscapes, about children playing and other evocations which substitute the sight of control with the projection of the inmates’ desires. Perucatti strongly fought for the abolition of life sentences and for the transformation of the prison experience from a punitive into rehabilitative one. The work was realized in collaboration with architect and designer José Parral.

Green White Red (Mediterranean Blue) (2018) shows the migrant body, physically and socially imprisoned in meagre interpretations and strategies of political capitalisation and cultural and social consensus. Of the three works in the exhibition, this is perhaps the most complex one. The contemporary migrant body is deemed alien, and despite its singularity and plurality, struggles to escape the monolithic definitions of citizenship, borders and migration, thereby losing rights and identity.

In general, through this show Montezemolo displays multiple entangled directions which reflect imprisonment, identification and identity, giving the bodies represented a new voice, while questioning and suggesting the biopolitical Focauldiant social theory behind the supposed otherness, and overturning historical, geographical and political distances.