Hurricane Matthew And #PrayForHaiti | But “pray” For What? Send Help, Please 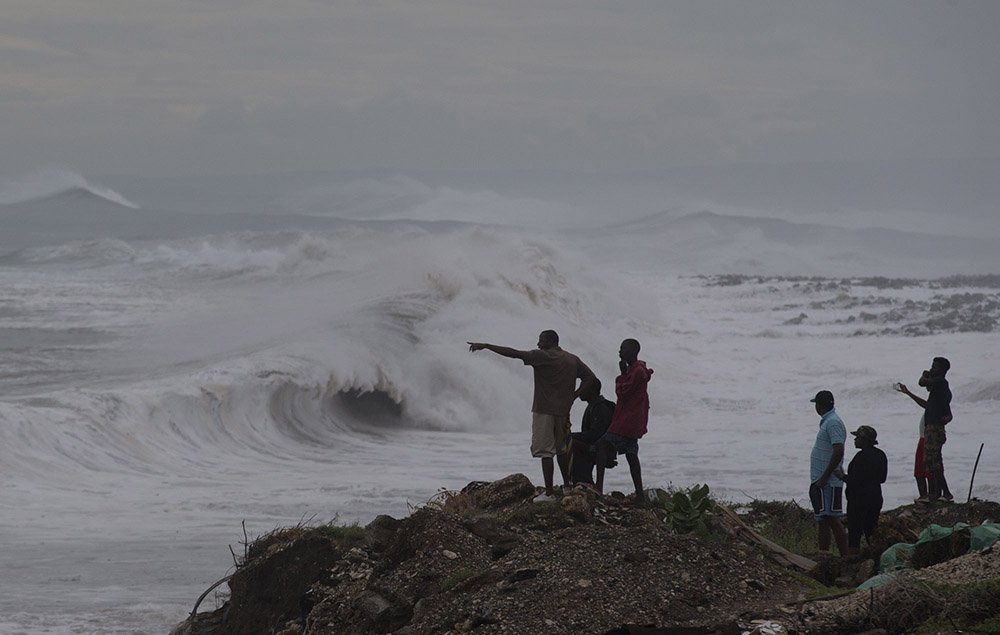 Talking about Haiti is always very difficult for me. Whether talking about natural or man made disasters. Often the former are a result of the later especially in a country where so much deforestation has taken place – on over 97% of the land since the 1960’s. Above all I can’t understand the ruling class of a country moving around the streets in huge ostentatious SUVs, showing no remorse whatsoever for the effect this behavior has on the people.

In 2008 Hurricane Hanna hit La Perle des Antilles. The official death toll rose to 537 lives lost. Taken. I was in Sicily at the time and my friends who’d bought the newspaper told me what had happened. One of them had a satellite phone. My mother was in Haiti on holiday. Fortunately everyone was OK but what a shock, which in turn gave way to a continual state of anxiety.

A year later I decided to go to Haiti and thanks to a friend photographer we went to the affected areas, like Gonaïves. We took some pictures of the prison and the detainees. We visited the local hospital and the sick. It’s heart wrenching to see firsthand a society that is forced to live a way of life that does not represent them in the slightest.

When the summer was over I came home, to Italy. Less than 4 months later the nightmare returned. This time it was worse. It was bigger. More destructive. January 12, 2010 an earthquake measuring 7 on the Richter scale shock the island. By chance I was still up absent mindedly flicking through the TV stations when I heard the reporter on TV say “Haiti.” and the words devastating  earthquake. More deaths again. More rushing to find out if my relatives were OK. 4 hours of trying to contact them in vain. All the lines were down. Finally, from the other side of the world I heard a voice telling me everything was OK. That everyone was fine. No damage to the house but the situation wasn’t good. In fact it wasn’t good at all. Then, after a few weeks, the numbers started rolling in again: between 100,000 and 160,000. Between 220,000 and 316,000 dead. But are numbers important?

In the summer of 2010 I went back to Haiti to do something. To help the Italian Red Cross, who were in some way active in the field.

Then we get to last week. Again Haiti faced the wrath of Mother Nature, this time called Matthew. To date there are 1,000 victims but naturally this number will go up as many areas are still inaccessible. We don’t know how much these numbers are likely to increase. But are numbers important?

Speaking about it is difficult because just 2 months ago I was there on holiday. Also because every time a disaster occurs in my other land, I am engulfed by feelings of sadness, anger, helplessness, incredulity, resignation and, finding no consolation, cursing the swine who don’t do anything to help, I loose myself in thoughts about the supernatural and divine fury. It hurts less.

On social media I have seen a lot of solidarity but also a lot of futility. People who complain about the fact that the online mainstream press gave greater importance to Florida over Haiti and instead sharing useful information about how to help immediately and effectively, they wrote “click baiting” headlines. There are also people complaining that Facebook hasn’t created a profile picture overlay with the colors of the Haitian flag. Do you need a flag to show your solidarity and to keep your conscience clear?

I have two biggest fears. Cholera – so health and sanity – which appeared a few years ago carried by contingencies of Nepalese soldiers from the Minustah (at least in August Secretary General Ban Ki-moon has admited that the United Nations played a role in the initial outbreak. Better late than never) and had almost been wiped out. Security. In a country that in the last few months has seen, in the Petion Ville area and the capital, a series of senseless murders you can be sure that things are likely to get worse. And just think, in 1982 Haiti was considered one of the safest places in the world.

The value placed on a life changed after the earthquake, after all those dead bodies were left in open graves. Years ago, as soon as someone died the police came to cover the body with a sheet and dispel prying eyes. Today people take pictures. My relatives told me as they are there. They also tell me that Haitians are a resilient nation. That, I already knew. I can see it in some of the photos online. Notwithstanding everything, ocassionally you can catch the glimpse of a smile. But this time around, the umpteenth time, they say that the lives of many will become a gamble as uncertainty grows. And it’s sure to grow fast.

Here is a list of local organizations that are collecting aid. I wouldn’t go anywhere near the big NGOs. There was so much money collected worldwide for the earthquake and there are still people without shelter, living like stray animals. The decision, however, is yours.

I’d like to finish by saying, yes Pray for Haiti but also, help if you can. Please.