Houston We Have A Problem | Burning Man Is Infested With Bugs 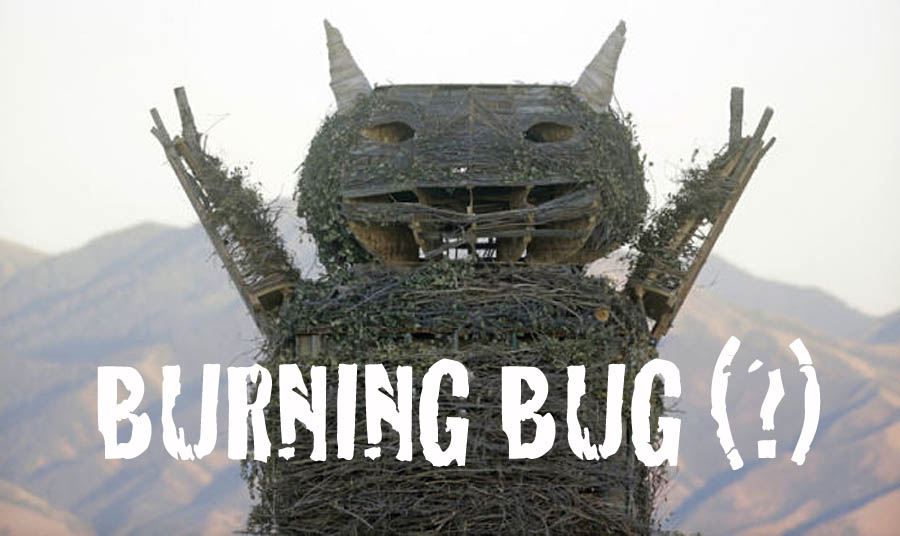 Only ten more days until the 24th edition of Burning Man- this year’s theme is Carnival of Mirrors, and rumor has it the Playa is infested with tons of bugs of every type and according to a blog posted by the Burning Man website “rumors are all true…bugs are real. They’re everywhere. They bite. They crawl all over you. They get up and in you”.
https://twitter.com/CLoungebrc/status/633789214987956224/photo/1?ref_src=twsrc^tfw

“Twin Peaks, who’s leading the construction of the Center Café, was talking about how bad they are when she jumped a little and pulled her t-shirt away from her body. A good-sized green bug fell to the ground. It had crawled into her bra”.

“Metal Shop Heather wears a welding mask most of the day. Bugs have crawled up inside her visor and nestled around her eyes. Cammy and Stinger needed some help from the medical team to deal with the infestation; Stinger’s back was covered with nasty red welts from the bites”. Those who have already planned to go to the Playa might be wondering what’s going on.

“We don’t know. We don’t know how the little critters survive in the heat and the sun. All we know is that if you pick up some wood, you’re likely to uncover hundreds or thousands of the things. They’ve blown up inches deep against the sides of the Commissary tent. They’ve covered the carpets at the Depot. They’re all over the Man Base. So it’s not a localized occurrence, it’s everywhere,” John Curley says, photographer and blogger who’s now in Black Rock City.

“We’ve been blessed by fair skies so far during the build. For the first time in the past several years, there’s been no rain or lightning or hail or high winds to bring things to a crawl. But maybe we are making our way around the various plagues, and this year it’s time for pestilence”, goes on.

“Marcia said that one had flown into her mouth gotten lodged between her teeth. She reports that they are quite bitter to the taste. We don’t know how long it will last. Cobra Commander said at the morning meeting that high temperatures will be with us again today, and the hope is that the heat and the dryness will knock down the bug population. “Because otherwise we’re gonna have to nuke the city” to get rid of them.

If last year, after having purchased a ticket for Burning Man (which are not easy to come by and I’d been dreaming to go to for years), buying plane tickets, renting a jeep, spending money on necessities for the trip and chipping in funds for the art installation for the camp where I was to stay, the Campi Camp, I had been informed that everything was pretty much out the window…well, I can’t say exactly how I would have reacted.

Dan Fox recalls “We got eaten alive the first few days of the Trojan Horse build in 2011, especially once we got up to the belly level. Then it faded away to nothing. 2011 had about the best weather I have experienced out there, So maybe the bugs are a good omen…”

We hope Dan. We hope.