On the occasion of his exhibition A machine that Makes at Guts Gallery London, conceptual Artist Glenn Lutz speaks to GRIOT about his new book There’s Light: Artworks & Conversations Examining Black Masculinity, Identity & Mental Well-being and how the themes of the book tie back to his art. 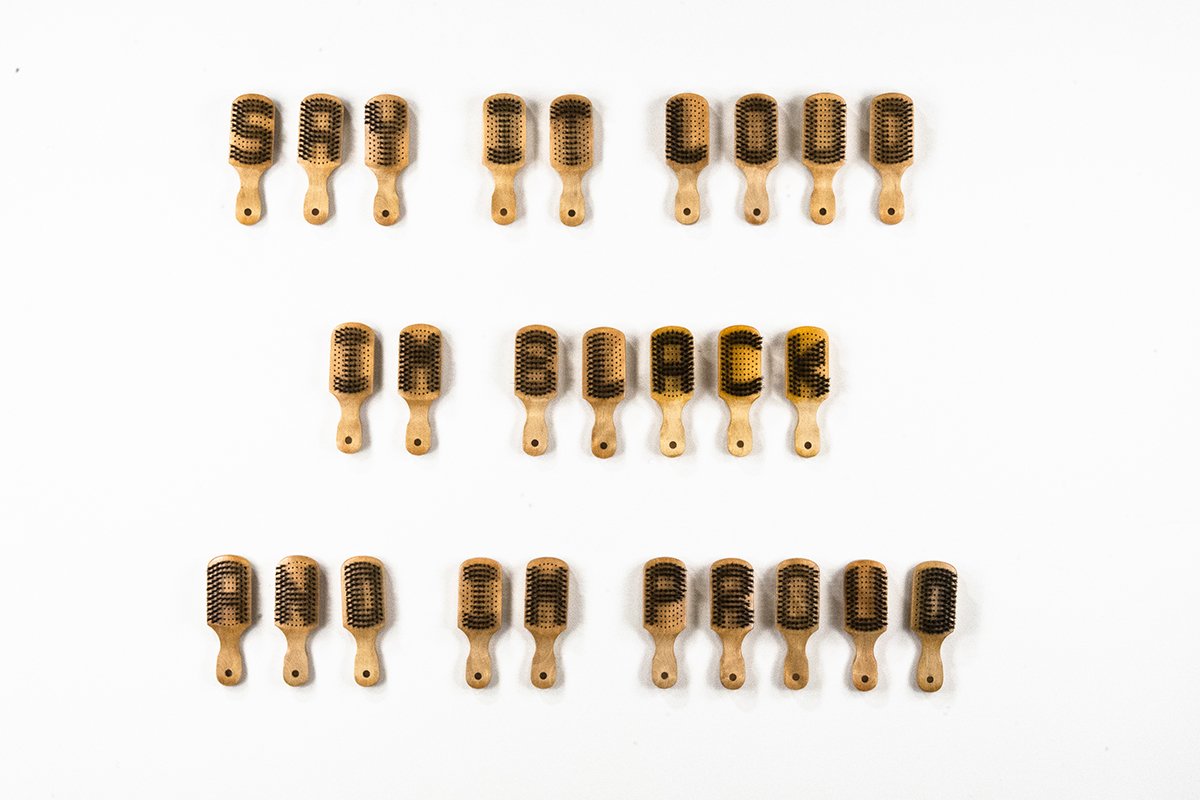 Glenn Lutz: access to the internet and social media and the speed with which we get information has exacerbated a lot of mental health issues. Maybe people’s brains weren’t moving as fast in the past. We know that depression and anxiety is fuelled by not being present, ruminating about the past and thinking of the future. These issues are much more prevalent and people are talking about it. It’s good that people are being open and discussing it because there’s peace in knowing that other people are going through similar things. There is also a much more focused effort on promoting therapy which is important. A lot of people suffered in silence for a long time and even today, when people commit suicide you hear their friends saying ‘I just didn’t see it, we were hanging out the day before’. The more we talk about these issues and share our stories, the more we are going to pullback on that. So I think these conversations are a good thing.

For the book, you chose a conversational format that is interspersed with artworks. As an artist it is quite clear why you would do that, but tell us about this exceptionally wide range of  contributors

I was recently talking to my sister about the format, and this idea of it being conversational and very open, and even though the subtitle of the book reveals a clear intention of where the book is leading, it is still very open, and different people can take so much from it. That was important because of the polarization. There’s so many opinions and so many books and thought leaders or authors or political figures that each have a very specific agenda. When we are presented with different stories or just different perspectives, we are enter those conversations with the very set stance, from where we’re coming from. With the centre of There’s Light being storytelling, sharing our stories but also exploring ourselves not only as black men but just as human beings, I wanted the conversations to be open.

As an artist, I was thinking about ego, because we are dealing with identity: we are who we are and it’s ok and it’s a beautiful thing and we should stand in that. But how do we move in a space of empathy and a place of open-mindedness? I presented There’s Light as an offering. One can look through it and get what they get.

There are abolitionist perspectives alongside perspectives of people who were in the military or who worked as correctional officers in the prison system. Through the conversations and the artworks, we as Black men and other people that engage with the book can begin to think about how we are experiencing our lives in different geographies. Ultimately, the main focus is on self-exploration and the book being a tool to begin to discover things within yourself. If a conversation or an artwork opens up something, there’s space to explore that.

We have known you as a conceptual artist and author. With There’s Light, you venture into publishing with your own company and imprint, Lioraffe. There’s Light is the inaugural title. What role does publishing play in your practise?

When I was conceptualizing the project I didn’t think I was going to publish it personally. I presented it to different publishing houses and people I had worked with in the past and I think it was such a lofty goal. The publishing industry is looking for a specific answer, they are interested in things like ‘what are we getting to in this book? What is the thesis?’ I wanted it to be more open than that, like an open sky, where you can find a picture in the clouds. After I had the conversations, I realized it was coming together, so I set out to publish it in that way. It was a real learning experience. For instance, there are some hurdles in distribution for up and coming publishers.

As a part of my practise as an artist, I think about Sol Lewitt, Chris Burton and other artists who used the book to create certain works. That is what I am interested in doing with the publishing company. It’s not that I necessarily want to be a publisher or that I’m excited about that space, but there was an obstacle and I got to the point where I had an intention to finish. I am interested in collaborating with other publishing companies to put out the books so that it has a wider reach, because that’s ultimately what it is. I want people to see the book and to hold the book, to find the book organically in a store.

The first pages of the book are quite striking. They feature a series of artworks that you have been making since 2020. Could you give us a sense of this series by describing them and the connections to the book.

Those artworks will be shown at Guts Gallery in London in October along with a couple other artworks. The ones in the book are these lightbox heads, their bodies are not attached. They are from a series called A machine that makes. For me conceptual art is like a puzzle. There were a lot of things that went into those artworks. The title A Machine That Makes is a reference to Sol Lewitts definition of what conceptual art is, so the work of being a machine that makes and this process, but taking that as a synonym to this side of our minds and how our minds are a machine that can create light. We have the power to control our thoughts and to create healthy habits and how we can begin to move forward. I thought of it as a machine that can create light, a machine that is in harmony with our mind. Body and soul can begin to attain some kind of enlightenment in our lives or at least to live a life of being worthy and honourable.

Using the medium of a light box for me is really a synonym of the medium of consumerism and capitalism, and how we are inundated with lightbox imagery. We are being sold these different things. To me, it’s also connected to the commodification of the black man and the black experience, our music and our culture, whether that’s hip hop, fashion, art, or our masks that we have created for rituals and how they’ve been used, like when Picasso brought it into his practise and hip hop and how that is translated into k-pop and how we have seen that. The work is a mirror of that. The other side is that these men were educators, and those photos were taken in the early 1900s. They were living in in America at that time and seeing a different future. I want my work to engage that dialogue, I want people to feel something and I would imagine that a lot of people would walk in and not like an artwork like that.

I’m curious about something that changed or switched while you were making the book and that affected how the book turned out eventually.

It was more so maybe a weight lifted off, to be honest, because it was a lot of work and doing it independently there was also just financially and all those sorts of things creating something that I really believed in and want to make. There was  a bit of relief in actually being able to see the book as an actual book once it was published.