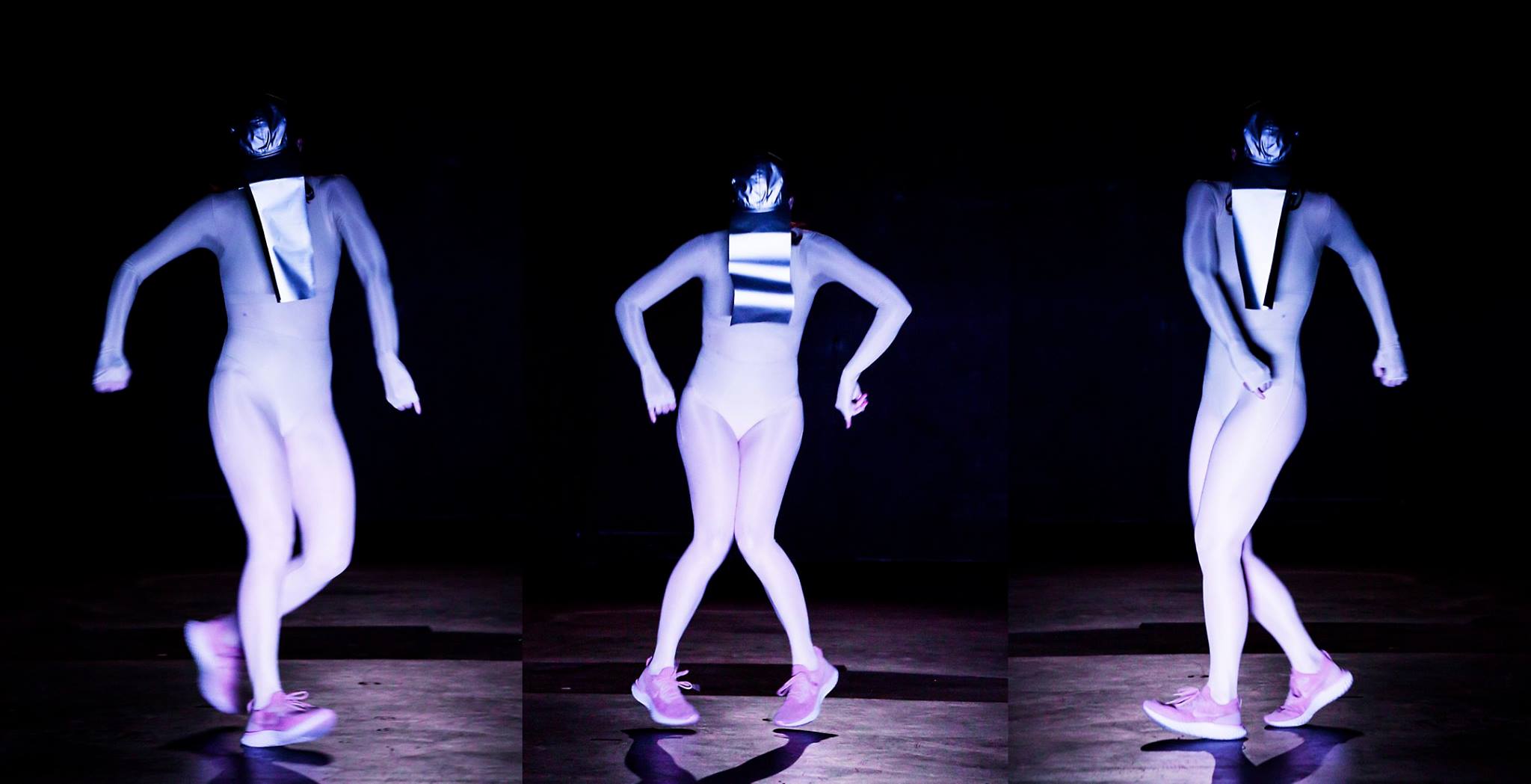 Incorporating the sonic legacy of disco, techno and house, footwork is a musical genre and dance style born in Chicago in the 1990s. Created and promoted by pioneers such as RP Boo, DJ Rashad, DJ Spinn, Traxman and Clent, it has become a musical culture in which sound and movement merge into a unique dimension, like two sides of the same coin. Barokthegreat, the performance group formed by the dancer-choreographer Sonia Brunelli, the musician Leila Gharib and the London-based director and designer Simon Vincenzi, analyses and investigates this fundamental aspect of Chicago footwork in the performance GHOST- Lucifer wants to sell.

After ten years since its formation, venturing into such analytical research is nothing new for Barokthegreat, as Sonia and Leila tell me during a Skype call from Verona. “Our works always have original music and choreographies. We get together during the development phase and try to find a dialogue between the disciplines. Through the years we’ve investigated different dynamic relationships between the choreographic gesture and the music within an environment that had to be built: from the movement of the lights, to the scenography, to the costumes. We have been joined by many people that we felt an artistic harmony with: visual artists, playwrights, dancers, performers and other musicians who took care of the sound with Leila,” Sonia tells me. “The group was born in July 2008 when I was invited to collaborate with a director and a musician for the project Sujets à Vif at the Avignon Festival,” she continues. “I chose Simon Vincenzi, whom I had seen at the 2005 Venice Teatro Biennale with the work The Invisible Dances, and Leila Gharib, that I’d met at a theatre festival and thought was the right person to collaborate with.”

Born from the union of individual paths, Barokthegreat’s name is linked to a baroque garden that Sonia and Leila went in search for and never found during a trip in Nuremberg; a moniker that has never abandoned them, even during the Avignon experience. The group has always had a very strong focus on individual exploration and all their projects are rooted in their respective musical and choreographic research, even though the starting point is different each time. If their previous work, Victory Smoke, found its genesis in Leila’s readings on the psychological dynamics between humans and animals, GHOST was born from Sonia Brunelli’s passion for the Chicago footwork culture, a street dance style that she has been studying and teaching for years. “Footworkers come from Chicago rarely come to Verona. I took some classes with King Charles, the only Chicago Footwork exponent who regularly comes to Italy. I studied the fundamentals with him and then I started an analytical research of the steps through Youtube videos. I created an archive of more than 200 steps that I saw, recognised and reinterpreted in my own way — because obviously I don’t know Chicago footwork like the people who practice it there every day,” she explains. “When an opportunity to create a new production came up, I took all this study material and introduced it to Leila, who—like me—immediately got into it and started researching the drum machine, the instrument used in Chicago footwork.” In the process of creating GHOST, Barokthegreat found themselves in front of new stimuli and technical challenges, first and foremost the speed of the beat. “I realised that the duration of the videos is about 20 seconds, because in those few seconds you have to use all your energy and intensity. We had to deal with a duration of 50 minutes, so we went back to the origin of the step with Simon Vicenzi, starting from the basics until we very slowly got to use the 10 basic steps of Chicago footwork,” says Sonia. “We were able to develop the dramaturgy more efficiently also thanks to an actual function of the drum machine, which is the possibility to control the BPM: the speed of the beat,” continues Leila. “The 160 BPM range is very important in Chicago footwork and we decided to use the speed knob in an instinctive way, bringing it to its two extreme ends of 40 and 300 BPM. This solved the dramaturgical development by creating a gradual progression. At the beginning it was just like enlarging a canvas to see what’s inside, because by slowing down the steps we were finally able to see them.”

And here’s where the concept of “ghost” enters the game alongside the fundamental creative work and direction of Simon Vicenzi, that Sonia defines as “a magician of the invisible” thanks to his long research work on invisible dances. “We wanted to work with Simon Vincenzi again to celebrate these 10 years of Barokthegreat. He is also a magician in being able to work with the repeatability of movement and with movement that generates itself. As a director, he doesn’t give you a script to learn, it’s the experience inside the show that makes you develop a language — I’ve always been fascinated by his ability to not give you any information on how to move. In this case, we were inspired by footwork, but we realised that a lot of information goes missing with the speed of the steps. This is a dance style that—as they say in Chicago—challenges the eye, you only perceive a snapshot of the step. It’s an indecipherable language if you don’t know it. So we thought he would be the right person to bring in to start investigate what appears and disappears in Chicago footwork. We also discovered that the word ghost is a step and that often during battles people shout ‘Ghost! Ghost! Ghost!’ when they notice that a fellow dancer is going so fast that it seems as his personality and soul are coming out of their body,” Brunelli explains. During the development of the show, which Leila instinctively commands from the control room, something happens with the high speed of the beat that the two artists can’t really explain. Sonia’s body is lost at the mercy of music, a new alien and phantasmagorical dimension manifests and you can no longer keep up with speed, says Leila. This unexpected condition for both of them, makes the choreography and the musical composition assume new, different  traits each time, Sonia points out. “We have a language and various steps that we always combine in different ways, so GHOST evolves in diversity, there’s something that keeps the whole show alive. I think the ghost is right there, in the fact that it can manifest itself at this time or maybe a little later, or in 10 more minutes.”

Going to the social roots of Chicago footwork, an inclusive movement often fuelled by the sound of dancers turned beat makers in which the sonic and the kinetic world merge, GHOST is a very perceptive performance that deeply strikes the spectator. “The show can be violent and delicate, it turns emotional states upside down, it’s our nature. If you close your eyes during the performance, you are struck by the sound of Leila and the constant beat of her drum machine,” says Sonia. In fact, at each show some people are impressed by the virtuosity and the difficulty of the performance, some let themselves go into an imaginary world of pure psychedelia, some burst into tears terrified and others want to learn the steps and learn all about the footwork culture.

GHOST isn’t the only thing Barokthegreat has been focusing on lately. Sequoyah Tiger, Leila Gharib’s musical project, has become an extension of Barokthegreat. Born as a solo project, it naturally evolved into a form live performance choreographed by Sonia. “The challenge was to reimagine the song in a performative way and I think we succeeded in bringing contemporary dance to popular and non-experimental music festivals,” says Leila. “At the moment I’m writing a new album that I hope will come out next year. Then we’ll see if we want to continue with this type of live performance or if we want to come up with something new.”