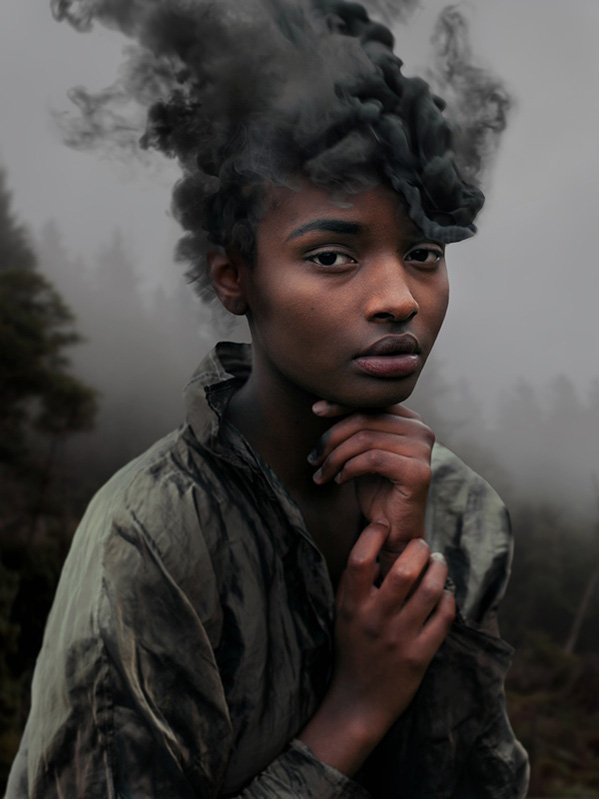 It’s only a few days until the opening of Akaa – Also Knonw As Africa – the first and only art fair in France devoted to contemporary art and design from Africa. There’s great excitement among the galleries which will welcome a huge number of collectors and art lovers (in 2016 AKAA first edition was attended by 15.000 people.)

38 galleries will exhibit the works of 150 artists from 28 countries inside the beautiful Carreau du Tempe. Galerie Number 8, an independent gallery that already caught our attention last year is one of them.

Founded by Marie-Gomis Trezise, former art director in the music industry, Galerie Number 8 represents both European and American photographers with African descent and since its establishment in 2016 it has been able to carving out a space within the jungle of the art giants.

“It’s a great honour for a young up and coming gallery like mine to be invited to Akaa. It’s so exciting, I’m thrilled for the artists that I work with to be given the opportunity to show their work at such an important event. I think it’s a big self-confidence boost, both for the artists who are showing their work and also for me as the curator of my gallery,” Marie told me.

“It also marks the first anniversary of the gallery…I will have a glass of champagne to myself and have a toast for all of the photographers I work with. I have learnt a awful lot in this first year and I feel it’s just the beginning. But it’s definitely given me the self-confidence, awareness and understanding that what I want to do and what I believe is right for me. And I cannot wait to start the second year and start building something meaningful!” an enthusiastic Marie revealed.

David Uzochukwu, Samia Ziadi, and Campbell Addy are the three photographers whose works will be showcased at AKAA.

David Uzochukwu is a Austrian-Nigerian self-taught photographer. Born in 1998 he began shooting very early. Starting from self-portraits he then got into portraying other people that were interesting and that he could recognize himself in. Despite his young age, he has already shot many editorials, realized projects with Adobe Photoshop and last year he was chosen by Nike to shoot its global campaign led by British-Jamaican singer FKA Twigs.

I Will Always Belong Into The Sky [I am Under III] is a photograph, a story of a dramatic moment Uzochukwu lived in the past, a self-discovery, a rebirth.

“I will always belong into the sky is part of a large body of work that has a lot to do with me finding my self worth, other views of me and shaping my view of myself. The title was actually taken from a Marina & The Diamonds song. And so, I found at some point that I did have something to say. This came as a very liberating piece because I hadn’t been creative nor posted online for half a year or longer, because at the time I was figuring out how to cope with social media. I started getting recognition online, and all of a sudden I received a crazy amount of interviews requests. And before I stopped making work I felt that I was slowly beginning to create in order to be able to share something on Instagram or Tumblr, rather than creating for myself. So after a year I started making this piece, almost spontaneously, again a kind of self portraying therapy. He was very liberating and I remember how insane I was when I finished the piece within a few hours. I showed it to my family and I was like: “This is insane, I can actually still create!” and my mom just looked at me and said: ‘What are you talking about David? Obviously you can create!’ There are a couple of images that tie together with this one. It’s kind of a making point for me because I really figured out and nailed this dramatic, real moment, dark, but hopeful moment. And I felt very naked but also invulnerable and very powerful in a way.”

Samia Ziadi understood the power of art in front of Le retable d’Isenheim, in Colmar, her hometown. In Marseille, where she arrived a little later, she worked on the decoration of film sets, then in the world of fashion, before starting mixing design, photo and video in her own very personal way.

“Following the terrorist attacks of November 2015 in Paris, I was tired of hearing about young people, immigration, their religion, their ghettos… So I realized the illustration and the design of La Robe Lumière with the effigy of the Virgin Mary and I chose to have it worn by young women with immigrant backgrounds or from disadvantaged neighborhoods.

In the piece 13 Avenue De La Paix the model is a young woman of Senegalese origins and Muslim confession. The dress is a symbol of peace, the tricoloured flag floating on the roof of the building symbolizes the belonging of these young people to the nation,” she revealed.

“It was also important for me to add color to these tower blocks because they are often left with little concerns by the local authorities.”

Campbell Addy is a British-Ghanaian photographer, he is considered one of the photographers of the ‘Next Generation’.

Former Central Saint Martin student, he founded Nii Agency and Nii Journal, the latter is a publication that embraces and encourages diversity, highlights the representation (or lack thereof) and the hardship that certain groups have endured along with their triumphs and inspiring life stories. “We are living in a generation where our differences are being positively and negatively broadcasted at a rapid rate and ideals and viewpoints are being reshaped constantly. Niijournal’s main objective is to ‘educate, not irritate.'”