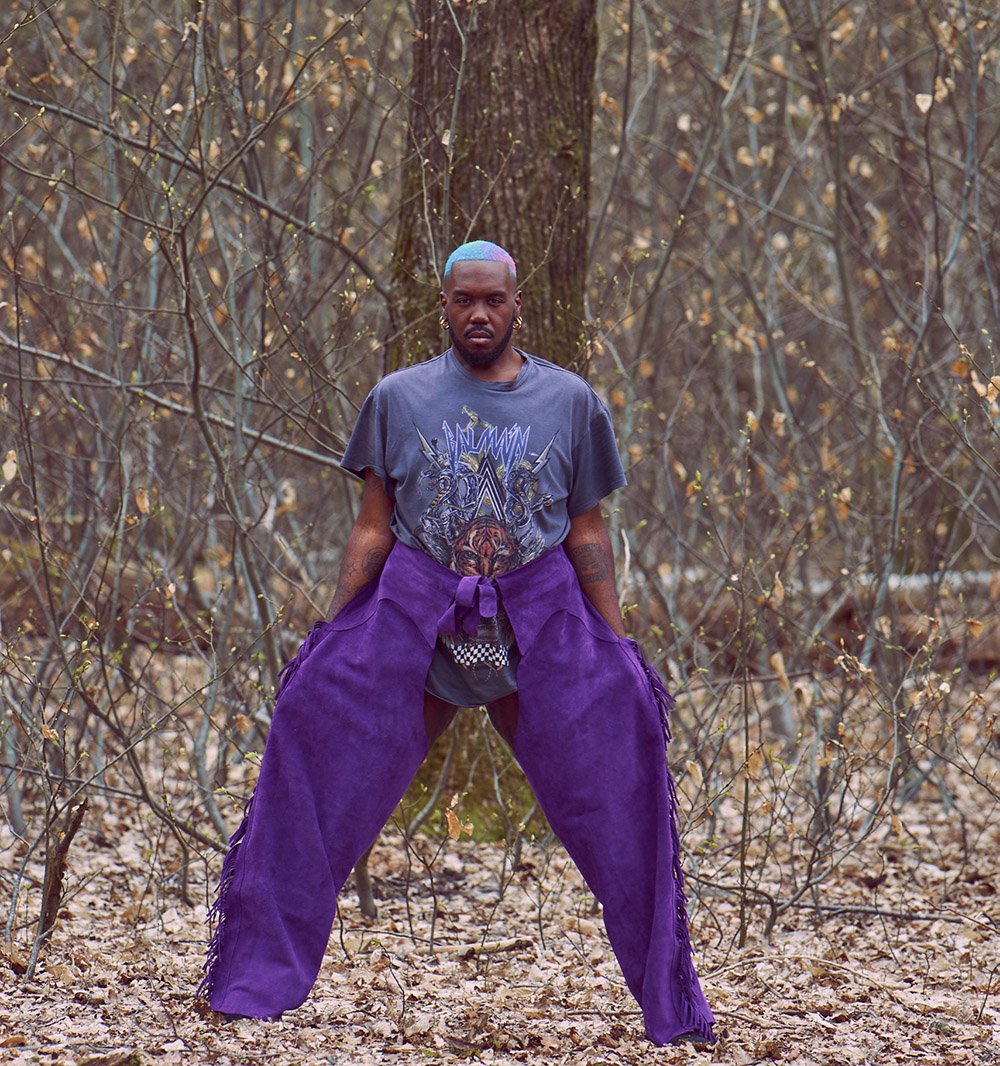 Pierre Hanffou, aka Kiddy Smile, is one of a kind. Gifted and talented to the core, his unparalleled talent has made him an icon across the French ballroom scene and has gained him the title of “French prince of voguing”.

Bold, proud and unapologetic, Kiddy Smile is a full-fledged artist: producer, DJ, singer and fashion designer, he started his career as a dancer landing some pretty big roles, such as Yelle and George Michael’s music videos. After meeting Beth Ditto from the Gossip, who became a sort of mentor, took him on tour and invited him to perform with her at Coachella where he met his first record label, he realised that making music was going to be the way forward. “I started about ten years ago, before I was a dancer and I really wanted to do more. I’ve always wanted to be able to tell my story through music,” he told us. And it clearly was the right choice, given the numerous achievements Kiddy Smile has earned in the past ten years, like last summer’s epic performance at the Élysée presidential palace for Emmanuel Macron — just to mention one — where he wore a t-shirt boldly stating: “Son of immigrants, black and gay – I wouldn’t exist with the asylum and immigration law” (Fils d’immigrés, noir et pédé, avec la loi Asile Immigration je n’existerais pas). We had a very interesting chat with him to find out more about his love for music, touring, his life since his debut album One Trick Pony, misrepresentation on the big screen and the pros and cons of being a role model.

GRIOT: How did you end up gravitating towards house music? Was it a natural choice when you started producing or is it something that you specifically wanted?

Kiddy Smile: I think it made sense for me to do house because I really wanted to do club music. At the time I was listening to a lot of jersey and baltimore club and I liked it a lot, but I think it wasn’t really pushing me production-wise. Then I realised that what I wanted to do was something that would be respected by people with taste in music, by people that call themselves “underground”, but I also wanted to touch the masses and to me the only music that succeeded in doing this, except for hip-hop, it’s house. So it made sense and I like that you can sing over house music, you can rap, it’s hot if you do not speak at all, it could have no vocals. I really like the freedom of house music.

It’s been exactly one year since the release of your debut LP One Trick Pony. What do you think this record has brought into your life?

It has been a full year, I didn’t know it was going to be so busy. I’ve done a lot of touring and I had to deal with a lot of health issues. Now that I’m feeling better I can appreciate the things that has brought to me, like the opportunity to play big festivals. I would have never imagined I would play Glastonbury—for example—or Solidays, which is one of the biggest festivals in France. I’m always surprised to see people show up in France, because I always feel like not a lot of people care about what I do, I’m always nervous, thinking: are there going to be people? If they’re here, are they going to stay? Are they gonna like it? I’m very interested about these things now.

We went on tour before the album came out and it was very different compared to after the release, because people didn’t know the songs and we had to go and bring them on board and make them discover the music. But now people know the lyrics, they sing, they dance, it’s very different. You know, you try and think if something is really going to work, but when you see people dancing and singing, you feel like maybe you’ve done something right.

This summer you released the video for your song Moving On Now showing the very best of your tour life. Was this video also a way to celebrate the feeling you just mentioned?

Yeah, completely. This year has been so rich and the video is made out of Instagram stories. We realised that there was so much happening on tour while doing the video and it was a 10-15 minutes long video, so there’s so much that we left out. But it’s also because I was touring with my friends and with people I care a lot about and I wanted to show the people that were on my tour and that you don’t see: the tour manager, the sound engineer, the lighting engineer, my management. I wanted to give a shout out to everyone who helped me be Kiddy Smile.

Last year you played a part in Gaspar Noé’s “Climax”, you contributed to the soundtrack with your song Dickmatize taken from your album,  and you made history by breaking the dress code and absolutely smashing it on the red carpet at the Cannes Festival. Is acting and working in cinema something that you would like to do more in the future?

I’d like to do it again, but I’m very realistic about the opportunities that could be offered to me. I received an offer that I declined because I thought that it would only portray me in one dimension and I’m aware that as a black person the versatility of the characters that I could play is very limited. Also, because of the fact that I’m a musician, people won’t expect me or won’t give me the chance to play parts that are different from what they know about me. If you’re an openly gay musician, your going to get the part of the gay man or because I’m black it’s going to have to be related to something about colour. Not that I would refuse something like that, but it needs to be interesting. I would love to do more in the movie industry, but for now I live in France so it’s very complicated and I don’t think there will be more possibilities for me, unless somebody writes something for me — but I doubt that’s gonna happen.

You’re known as the ‘French prince of voguing” and you’ve broken so many boundaries in terms of representation. Do you sometimes feel the weight of the responsibility of being a role model?

I’m happy that people can relate to my experience and to the things I’m going through, but I only speak for myself, I only speak about my experience and if people relate to it, that’s good. I don’t like to present myself as somebody who speaks for other people because that’s not what I do. I do music, I express my life through music and if it touches people, I don’t think that makes me an advocate. What I find a bit annoying is—of course I’m talking about the oppression that I’m facing and that I’m living because my being is intersectional—if I talk about what I suffer and experience, it’s gonna be challenging the system and then my music becomes political. For me it’s just my life, but for other people who don’t face that oppression, they see it almost as politics. While, I don’t think about myself as an advocate, I wouldn’t go and do a show only to speak about those issues, it has to be related to my music. Also, I don’t want to accept it because it’s a bit disrespectful to people who actually dedicated their life to making things change, I think they’re the real advocates, the real icons.

Over the years the LGBTQAI+ community has found new ways to include, protect, advocate, build community and create safe spaces, which is something that the balls have been providing through the years. In your experience, how has western societies’ hyper technological era, changed or affected the ballroom-culture?

Eight years ago when I arrived in the ballroom scene the Internet was already here and I had already seen clips of people dancing, balls and stuff before I was introduced to the movement and to the culture. But I think the Internet has done a lot of damage everywhere, I think it did. At the same time, it has also provided accessibility: it would have taken me longer to find out about ballrooms and also, as somebody who lives in Europe, it would have been very challenging to be able to see and to experience the culture. That’s what I like about the Internet, it breaks the boundaries of certain privileges such as having money or physical ability: what if I was someone in a wheelchair, black and gay and I want to know about ballrooms and there was no internet and I had to travel? The internet gives this proximity, it helped propagate those cultures, but it’s also hard because we’re still fighting to keep ballrooms safe places, but just the fact that straight people know about it and can come to a ball… is it really a safe place? I don’t know.

What can you tell me about your next projects, are you going to release new music soon?

I’m working on releasing a deluxe edition of my album and I’m also working on new videos which will come out in Autumn.