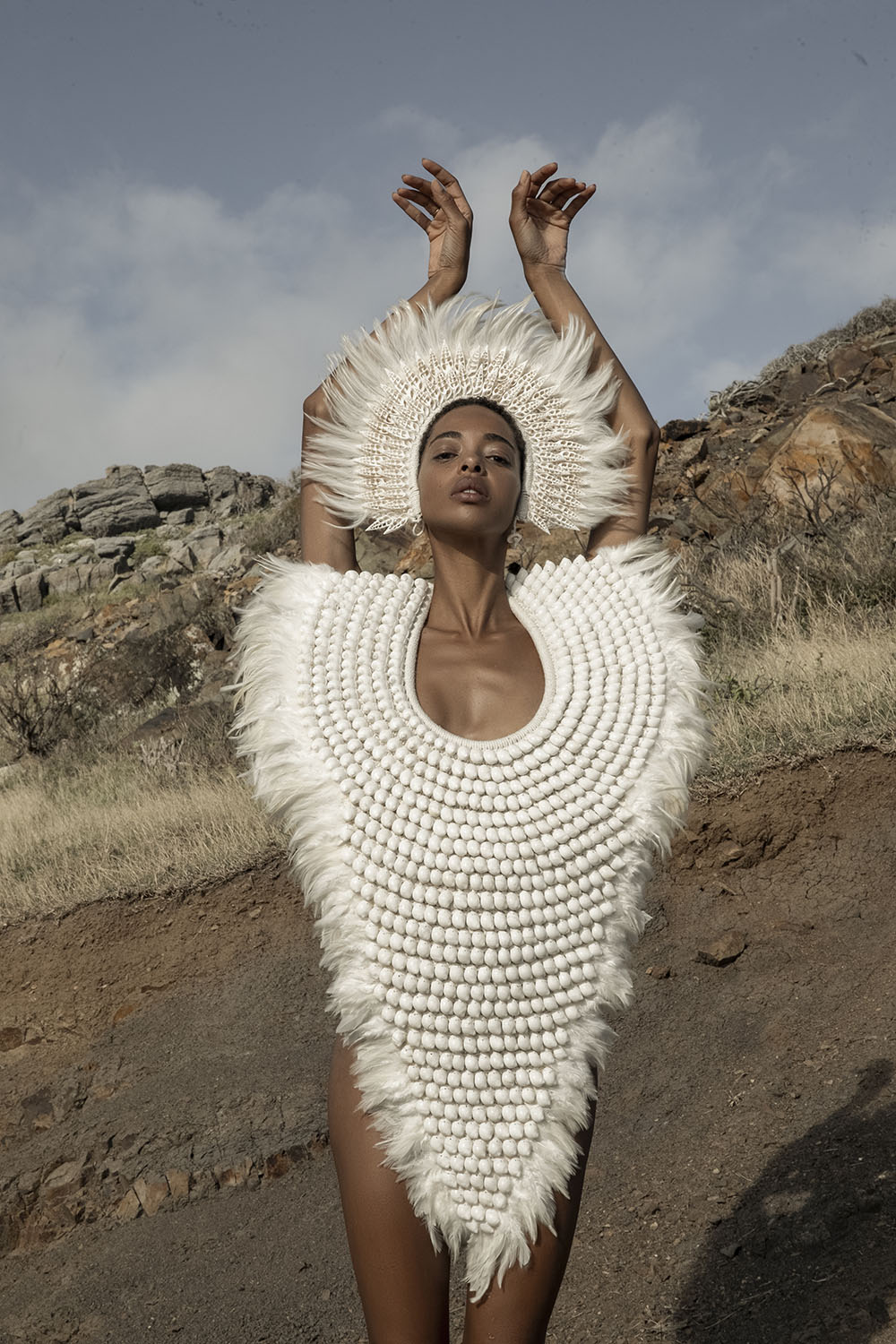 Gilone has a velvet voice that envelopes you like a blanket made of the softest feathers. It is a journey to the world of senses and emotions. Hers is a love poem for those who find peace in dreams, travelling and fantasy. Born in Guadeloupe, Virginie Lentulus a.k.a Gilone—a French model, poet, singer-songwriter—originally intended to become a dancer after she was first noticed at sixteen by the famous Elite Paris agency. She began her career three years later, after signing at the Milanese agency Women. Among the obstacles the talented Guadeloupean encountered on her way to success were precarity, discrimination and language barriers. Fight, the name of her first single, is a testimony of victory on a path full of pitfalls.

GRIOT: For many years you aimed to become a dancer, then you began modelling. When did you realise you wanted to be a singer?

Gilone: When I was little, I could sit and listen to music for hours. I started dancing at three years old, played piano at seven, sang in my college choir at 12. I wanted to explore each aspect of music during my childhood. Then, later in my twenties, my passion for singing, songwriting, music composition and visual art came out—it had been developing over the 10 years I spent travelling the world with my modelling career. It was intuitive at some point. Every time I was working or walking in nature, I would start hearing my own melodies, finding my own vocals and instrumental sounds that I loved. That’s when I felt the creative urge to put out music and tell stories. In 2018, I knew the kind of experimental electro I wanted to record but also combined my music with visual art and film. I was looking for a music producer with a cinematic quality in their work to bring my ideas into a music project.

In 2019, I met Yvan Ginoux, a producer who had previously worked for years with French electronic artist Rone in Paris. I sent him my demo and two weeks later, I was in his music studio in Paris composing and recording my first track. I had also been working on the visual and creative concept of the Gilone character since 2017 by creating mood boards, music video scenarios, styling, organizing my own photo series. I love art direction and photography. In 2020, I focused on producing my debut EP and the first single Fight came out on my own label. So, in a way, in May this year, Gilone was born. Tell us more about your single Fight, where is it coming from?

In the last two years, I often asked myself what we are fighting for in life. In 2019, I started asking my friends, family and people I met while traveling. I heard things like, ‘To earn more money’; ‘For my dream job’, ‘For my kids’, ‘For my reputation’, ‘For my relationship’,’To work less’, ‘To change my life’. Everyone has their own motivation until difficulties, fear or failure arrive. I felt that one universal thing connects us all: love or lack of love. So I started to write ideas, composed melodies and lyrics. “What am I fighting for? The love of a man? Social success? Recognition? More money? Happiness?” Fight was born this way. It speaks of Love, the one for whom we exist, the one for whom we fight, the one who releases pain and gives way to the first love, “self-love”. Self-esteem.

Who inspired you to make music?

It’s not someone in particular, it’s just where I’m from. Music plays a vital role in the culture of Guadeloupe, the Caribbean island I was born and raised in. At a very young age, you hear live music everywhere, every day in the street – dancing, singing, performing live music for Carnival for weeks – or singing canticles with the community for Christmas for a month. My mother also listened to a lot of Jazz, soul music and French pop when I was growing up.

How would you describe the music you create?

I was born 200 meters from the sea in the Caribbean. I wanted to create contemplative music inspired by imaginary sounds underwater, between ethereal electronic beats, alternative, avant-garde pop and cinematic soundscapes. It’s close to who I am today—I live 200 meters from the ocean and the mountains today again —in a surf city in the south of France. That is reflected in what I create. I want people to travel far away and get lost in their minds when they hear my music.

What is your favourite part of your creative process?

I produce my own music and videos. I am free. I am doing my best to avoid preconditioned labelling, writing and creating by following rules of the mainstream market. This, I would say is my phobia. My creative process is to be free to do whatever I want. I create by instinct. Then I just follow the music to see where it takes me. What comes out is what I feel. I call it freedom!

Do you fight is a recurrent question in your song and it seems like you had to fight a lot to find your place in modelling, and in the music industry. What is your biggest challenge in this journey?

Staying true to myself. That’s the biggest challenge of my life!

On your blog Virginie Lentulus your passion for traveling is blatant. How does this influence your creative work?

I am so happy that you checked out my blog! Thank you! I was born and raised on Guadaloupe a tiny island of 400 000 people. I travelled to 30 countries by the time I was 30. All the people and cultures I encountered on my journey influenced my creative work.

Which musician would you like to collaborate with next ?

Have you ended your modelling career to focus on music?

No, I do both. For now, modelling pays the music bills.

What’s next for you? A new single, an album or perhaps a concert?

I’m working on a series of short music videos that will combine art, visuals, dancing, singing and music. It will be launched very soon. Then my second music video and debut EP Ocean Call will be released in the winter. As for the opportunity to perform live, it all depends on the Covid 19 situation! Hopefully we will know more by the beginning of 2021 when things will get back to normal.