Exercises For The Imagination Of A Space

Exercises for the Imagination of a Space is a result of GRIOTmag.com and SPAZIO GRIOT's experiences, and our numerous publishing, research and programming. Since 2015, both platforms have been committed to diverse forms of artistic expression from Africa, its diasporas and beyond by centring the voices of African/Black creators, doers and makers. 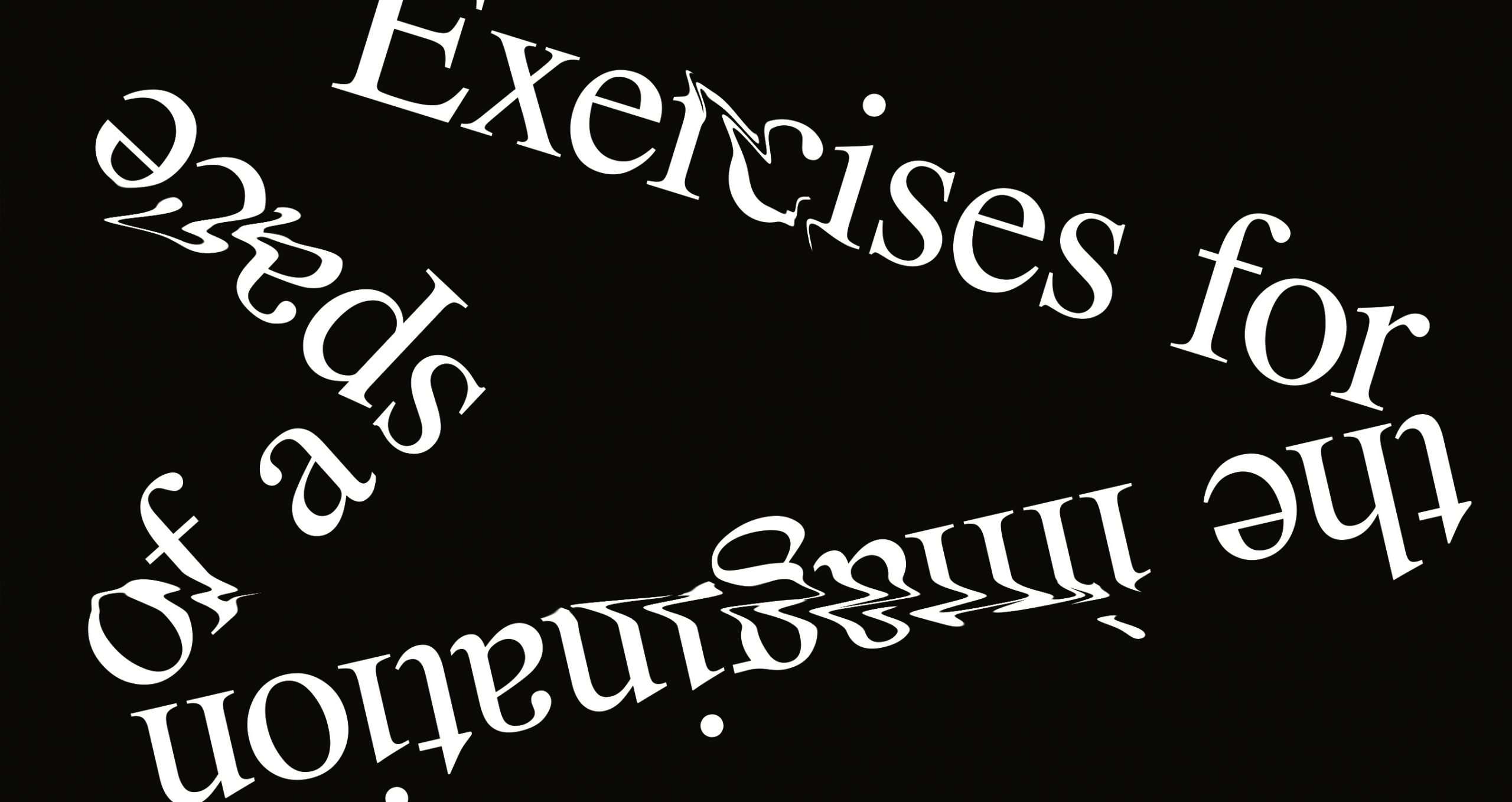 Exercises for the Imagination of a Space is a new curatorial project by Johanne Affricot. Affricot has chosen to seek a direct dialogue with various Afro-descendant and African artistic communities, in Italy and Ghana, in order to collectively reflect on what an artistic and cultural space is, how it acts on certain bodies, and in what way a space can transform itself into a vehicle to reduce inequalities, facilitating and promoting the involvement and access of marginalized subjectivities into artistic and cultural production.

In pursuit of a wider range of the African and Afro-descendant experiences, and in the claim of its complexity, the project was divided into two branches, with a first exercise aimed at carving out a “safe” space for conversations between Afro-descendant communities in Italy. These concerned intimate conversations, which protected and enhanced the personal experiences of the interlocutors. The dialogues were distributed into five chapters, divided according to the artistic practices implemented by the people invited: visual arts, writing, performing arts, society.

In order to promote greater accessibility, the four meetings were held online, connecting Afro-students across Italy and also resident abroad. A last meeting, more numerous, was held in person at a park in Rome.

How does it feel to be the only Black person in the room? Or rather, why is there often only one Black person in the room? These are some of the issues that were brought to attention, bringing to light an important red thread of reflections on the need for the Italian cultural world to become more accessible. This should also occur via offering economic support to the various marginalized communities paying attention to how the intersection between race, gender and class influences their access to the arts. The striking exclusion from such communities of what can be identified as the “centre of the artistic discourse” is undeniable, when such variables are taken into account. Amidst the flow of words, thoughts and critical reflections, many salient points and intimate deliberations emerged on the possibility of finding beauty that is accessible and spaces that are “safe”.

In the first part of the dialogues, the participants shared their personal paths and expanded on their relationship with art. Similar but also diversified experiences emerged. Art and its various manifestations often became a vehicle for discovering oneself, one’s present, and one’s past. During the conversations, the existence of a constantly changing relationship with art also emerged as a shared experience between the Afro-descendant artists: creation, destruction and recreation. A continuous evolution and personal deconstruction.

A first comparison on the personal artistic growth of the participants brought attention to loneliness of the Afro-descendents who grew up in the 80s / 90s / 2000s in Italy. The country was perceived on the one hand colour-blind to racialized experiences and narratives, and on the other hand as exotic and appropriating. A generic sense of hope emerged in the more recent dialogues around the relationship between art and cultural relativism, and the spaces that Afro-descendants have claimed through the use of new technologies and virtual spaces. However, all participants expressed the need to build physical and concrete spaces, which may become places of connection and cultural pollination. Participants then elaborated numerous critical and constructive reflections on what are the elements and practices to be used in order to create cultural spaces in Italy that are accessible to everyone.

Firstly, the importance of tackling schools was highlighted. Several participants stressed that in their personal experience, their access to cultural spaces and to the art world, had been supported by a dedicated teacher. Such access could have been even just merely psychological. This denotes how schools are configured as key places where children experience their passions and aspirations. The school system is therefore required to support students in their personal journey, valuing the diversity of students’ abilities and inclinations. Within this variable, however, the structural differences that can occur from school to school are not often considered. Firstly, it should be noted that a first discrimination occurs where resources to engage with art are quite unevenly distributed across the country. Differences may be found shifting the eye from northern Italy to southern Italy and from the city centres to the peripheries.

In addition, the variable of “discrimination” is often ignored. Racialized students may be disadvantaged by discriminatory attitudes, both systemic and personal attitudes manifested by the teaching body. At present in Italy, there is no concrete national plan to deal with problems related to racism in schools in a structured and systematic way, nor are there any statistics or monitoring of the episodes of racism that take place in schools. The absence of such studies, and lack of attention given to the variables of race and class, speaks volumes about the priorities of the education system. On a further note, with regard to the educational system, the need to decentralize and expand the narratives offered in social studies (art, history, philosophy, etc.) also emerged.

This reflection was later applied to the exercise of imagination of the ideal artistic space. The participants expressed the urgency of making artistic cultural spaces more usable and accessible, supporting the plurality of educational, institutional and independent cultural spaces. This could be done through artistic paths that are also connected to racialized realities, that may include decolonial and decolonizing narratives, that conceptually move away from the possibility that there is only one approach to art, or that there is only one understanding of “art”.

Going back to the need for further territorial and geographical awareness, it was expressed that these spaces must be made accessible also by creating bridges with the most marginalized realities, which often are the ones confined to specific geographical places, which often match those with fewer artistic resources. This operation would therefore require an accurate quantitative, intersectional and territorial study to evaluate which realities are more marginalized by cultural spaces, promoting access to cultural spaces.

This leads to the next point. That is, to be truly inclusive, a cultural space must also be able to be a meeting space between different realities. May those be communal and personal realities that reflect different facets of human identity. It was stressed that cultural spaces should be more sensitive to the complexity of the human experience, implementing narratives that leave a malleable and “safe” area for multiple narratives and existences to intersect. The necessity of physical meeting places therefore becomes essential, and the need to promote more diversity within said spaces becomes an urge. An artistic space that does not lead to the renunciation of the multifaceted parts of one’s identity.

In order to decentralize narratives and acquire a more unified approach to art, it is also necessary to encourage the practice of self-narration. Not ‘talking about and speaking for’ but creating a space where the various communities may speak for themselves.

It was also emphasized that tutoring and mentorship paths would be a valuable addition was also emphasized within cultural spaces, in order to guarantee support to the under-represented categories that is usually structurally absent. As a result, there is a need for physical spaces where such mentors can be met. In short, it was highlighted that there is an urge for spaces where community can be created. A community that is a place of intricate and complex exchanges, that connects different facets of the diasporas from multiple geographies. A physical space to develop or strengthen the process of self-determination that in recent years has poured into social media platforms, activating alliances and sub-communities, united or dissolved, but still capable of generating new forms of aggregation. A porous space, which can be both a place for exchange with those who are socially at the centre, and that may promote experimentation, exploration, and more intimate collective discussion.

Last but not least, in order to strengthen the bodies present in the space, and the dialogue between communities, the importance of care within artistic and cultural spaces was touched upon. The concept of cure can be read in many ways. An example consists in the possibility of holding events dedicated to communities, moments of sharing experiences and ancestral knowledge, moments of cultural appreciation and workshops that teach specific technical skills, moments of celebration and regeneration. The issue of the delocalisation of space management therefore resurfaces. It is necessary that such events may be organized and coordinated with the cooperation of the subjectivities involved, hence centering their needs.

In sum, the above collective imaginary sketch highlights the importance of a welfare system that levels the aforementioned structural inequalities, dismantling the current inaccessible approach to art, and artistic/cultural spaces.

Exercises for the Imagination of a Space is a new curatorial project by Johanne Affricot, commissioned by Orchestre della Trasformazione (a project curated by Locales and Visible—Cittadellarte-Fondazione Pistoletto/Fondazione Zegna) within the framework of the Rome Charter and in response to the UN 2030 Agenda fot Sustainable Development, Goal 10, aimed at reducing inequalities.

‘Exercises for the Imagination of a Space’ is a co-production between GRIOTmag.com/SPAZIO GRIOT and Azienda Speciale Palaexpo – Palazzo Delle Esposizioni di Roma