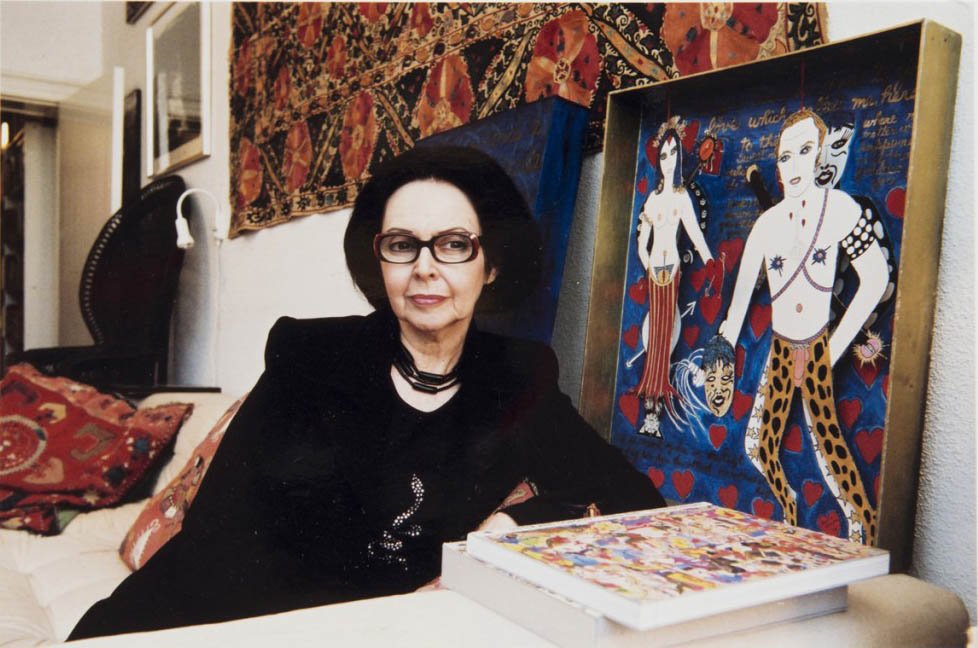 In 1961 when the police surprised her at the New York Airport while trying to bring Henry Miller’s banned book, Tropic of Cancer into the country, Dorothy Iannone was an American artist returning from a business trip in Europe with her gallerist husband. She was arrested and appealed to New York Civil Liberties Union (NYCLU) initiating the book’s ban to be lifted.

Born to an Italian family in Boston, self-taught in art, Iannone started to paint in1959 but her work did not yet have the explicitness that would later characterize it.

It was 1967 when her art would radically change: she fell madly in love with the artist Diether Roth, and that meeting would give a jolt to her career, and her love life, infusing it with representations of an all-encompassing, almost transcendental, love.

Iannone’s drawings, from Indian art, Egyptian depictions (quotations about Cleopatra appear often in the textual aspects), to psychedelic, began to be populated by figures in sexual ecstasy. The representations, replete with irony, subvert conventional dynamics (sometimes even physiognomy), men and women, the stereotypes of domination and control, the sacred and the profane, the roles of artist and muse.

Since that transformative moment, Iannone’s world was turned upside down. Her experiences and relationship with Roth became the protagonists of her work. Thirty years ahead of her time, and ahead of the work of the Young British Artist Tracey Emin, Iannone published Lists IV in 1967, an artist’s book that contained a list of all the men she had slept with.

But all that political tension and sex was too much for those times, and her art was subjected to censorship at the exhibition Friends of the Kunsthalle in Bern in 1969, after which her work was boycotted and ignored for more than thirty years.

Her artwork, with depictions of eroticism, unconditional love and transgressive sexuality, was also snubbed in the nineties, judged politically incorrect. There is no record of other solo exhibitions until 2006, when she exhibited her work at the Whitney Biennial Day for Night.

Today Dorothy Iannone is 81 years-old, and her art continues to reflect her long search for complementarity with the world and human beings, open and liberating eroticism, free of established roles and ever closer to the changes in contemporary society.

Iannone’s drawings, sculptures and books have inspired generations of artists, and continue to strike a chord for their great narrative power and a unique character, which is highly autobiographical.

Recently, she’s experiencing a global recognition for her artwork, especially in Europe, where in 2013, she held her first solo show in England – Innocence and aware – at Camden Arts Centre, and again in 2014 with a retrospective at the Berlinische Galerie, Berlin, Dorothy Iannone: This Sweetness Outside of Time. Retrospective 1959–2014.

December 1st, 2014 she published her latest artist’s book, You Who Read Me With Passion Now Must Forever Be My Friends, containing some of her known and unknown drawings and writing.

Dorothy Iannone will be a guest of the French gallery Air de Paris, from March 28th to May 16th, with her latest solo show, Welcome To Our Show, displaying paintings, drawings, films, objects and books from 1961 to 2015. If you are in Paris do not miss this visual experience full of love and spirituality.