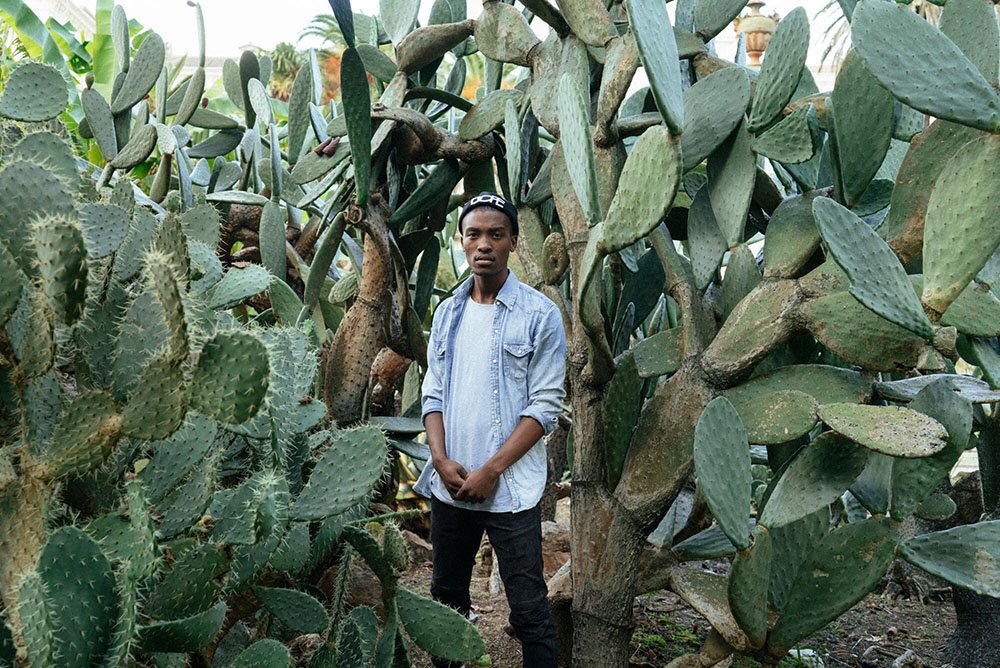 DJ Lag is the king of gqom, the South African genre that in the last year has unsettled the underground electronic music scene in Europe. Some may think that such pseudonym is quite a statement. However, if your music is so good that producers and labels managers are willing to come all the way to South Africa to meet you and take you on a world tour at twenty one years old, perhaps you deserve the title.

Coming from the township of Clermont in Durban, SA, DJ Lag is now touring Europe and Asia with Nan Kolè, producer, dj and head of Gqom oh!. His new EP will be out today on the London based record label and dj collective Goon Club Allstars. DJ Lag is one of the most talented yet humble DJs and producers out there and he is on a mission: to bring gqom to a mainstream level and outdo the disguised stigma it carries in SA.

I met DJ Lag in London and had an interesting chat with him.

GRIOT: When and how did you start producing?

DJ Lag: I started producing in 2010-11. At first I was doing hip hop, I used to produce for my brother because he was a rapper. He was the one who got me the softwares because he wanted me to make beats for him. But then he stopped rapping so I just continued producing and then I ended up doing house. My house music was not that good so I went back to hip hop. And then I heard some tracks from Naked Boyz, They were the first ones who started making broken beats in Durban so I wanted to do similar tracks to them. This way I started trying to recreate their style but I only had hip hop samples and I still had a hip hop style, so it was quite hard for me to do the exact thing.
In this way I started doing qgom. At that time it wasn’t gqom, it wasn’t even named qgom, it was just house to people.

Did it already have that dark hypnotic sound?

Yes, it did. I think at the time it wasn’t that good but people liked it.

So, were hip hop and house the music styles that you were mainly listening to at the time?

Yes, South African hip hop is huge. I used to listen to lots of hip hop from the township, people like  Akalicious, Adbus and other names. These are the guys who were big at the time.

Now gqom is huge. In London everyone starts buzzing at a tiny mention of the word. But I know that in Durban it’s seen as quite controversial, so it stayed underground for a long time. Have things changed at all?

Yes, qgom is getting big now even in South Africa. Because at first it wasn’t played outside Durban, it was just in the townships. But now it’s being played in Cape Town, Johannesburg and you can find it here [in Europe]. So it’s getting big and I’m happy that the sound that has been created in the township is now getting out. Your name is DJ Lag “king of gqom” and you’re one of the leading producers in the qgom scene. Is there something that you always aim at when you create your beats?

No, I don’t know. Because I don’t think about what people are expecting from me. I just do it the way I do it.

And you’re on your first world tour with Nan Kolè!

Yes! – he laughs and giggles.

How do you feel about it?

Happy! I feel so happy and grateful for this opportunity. I’ve always wanted to come since 2012.

What’s the best place you’ve been to so far?

Poland. Unsound festival was just crazy. That was my favourite, I really enjoyed myself there. In Europe and the Uk people rave to this crazy beat knowing almost nothing about its very unique background. However by playing gqom music you’re not just entertaining an audience, a whole different culture is actually brought along. So, from a dj and producer perspective, what do you think people over here should know about Durban?

Gqom is a sound that has been created in Durban, in the townships by young students. It’s dance music, it’s fast, it’s similar to house and you can also use it for hip hop. There are many dance groups in SA and people just love to dance to it.

Yes, I was a dancer in one of these groups in 2009 before I started producing. When I started doing music my friends use to take my tracks and go perform with my music.

So do you still dance to your own music?

Yes, all the time.

Do you usually work with other producers?

Not that much. Mainly because I don’t have friends near me who are producers. And I can’t ask a person to do a feature with me, I’m a shy guy and I’ve just decided to do my own music the way I do it. But if someone wants to feature, I will accept. But I haven’t worked with a lot of guys in production. Which artists do you recommend to people who want to explore the SA gqom scene?

Definitely Destruction Boyz, Infamous Boiz, the whole scene of Gqom Oh!, Tempo, DJ Lungsta, Lusiman … there are a lot of guys, so many.

I don’t know… I’ve never seen a girl producing in Durban. Even in South Africa, I’ve never seen one. It’s more of a young boys’ thing, when they’re about fourteen, fifteen.

But you carried on…

Yes, ever since I started high school I’ve been producing gqom, I’m 21 now. And I’m not going to stop because in SA they call me the “Godfather of gqom” so I just can’t stop, my aim is to make it big, take it to a mainstream level.

And what about the new EP? I know it took quite a long time to put it together. How did you come up with it?

Yes, it took about two years because I had a problem with my laptop. So I had to get it fixed, then get back all the files of the tracks and get them mixed and mastered. And now we’re just waiting for the release on the 11th of november. Are you working on other new projects for 2017?

Yes, I’ve got lots of news track that I’m working on, some are ready to be released. Many things will happen next year, I’m looking forward to it.

So where is gqom going? And how do you think it’s going to change?

Yes, I’m learning to try and change it. If we can get big artists to record on ggom music, maybe it could be something new for ggom and it can start being played in radio. Because gqom is not played by radios at the moment, it’s too underground and the tracks are instrumental. I can’t really say how it’s going to sound, but I think that will be the next step.